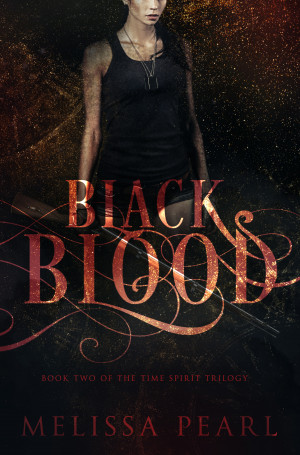 By Melissa Pearl
Rated 5.00/5 based on 7 reviews
In this sequel to Golden Blood, Gemma is betrayed by the people she loves and her world is torn apart. She must now set aside her fear of the truth and learn to trust a stranger in order to get back what she holds most dear. More
She never should have broken the rules.
But she did.
And now they’re going to make her pay…

What do you do when everything you thought you knew turns out to be a lie?

A mysterious stranger is questioning Gemma’s lineage. She doesn’t want to believe him. But could he be right?

A trip back in time will reveal a sickening truth she doesn’t want to accept. Thanks to her parents, Harrison’s family line is broken…and he no longer exists.

Can Gemma change the past and bring her boyfriend back?

To do this, she must trust a stranger and learn everything she can before she loses Harrison forever.

You’ll love Black Blood, because Gemma is about to find out that she’s capable of more than she ever thought she could be. Mysteries will be revealed as the fight for true freedom begins.

Other books available in this series...
Golden Blood & Pure Blood

Melissa Pearl is a romance author writing in a variety of genres from teen fiction to contemporary romance and romantic suspense. She also writes under the pen name Jordan Ford. She’s passionate about telling love stories with relatable characters who will take you on a journey. If you’re after an escape from reality, then you’re in the right place.

Loved Golden Blood, but Black Blood was amazing! Couldn't put it down! Love the characters, love their story! As soon as I finished I bought Pure Blood so their story wouldn't end.

As soon as I finished reading Golden Blood, which is the first book in the Time Spirit Trilogy, I HAD to contact the author and let her know how MUCH I loved it! Melissa Pearl was kind enough to give me the second and third book to read and review, and let me tell you, I had my own squealing moment for that. When I finally had the chance to read Black Blood, I just could NOT put it down! I am always scared of sequels not living up to the awesomeness of the first book, but boy, was it as addicting and exciting as Golden Blood. Black Blood gave you some answers while at the same time uncovering more secrets and doubts that keep you reading more and forgetting that you actually have a life outside this fictional world!

To start off, You get to find out more about the mysterious man at the end of Golden Blood and I was SO happy with that development! I liked that a new character that was introduced basically tipped Gemma's world 180 degrees and basically gave her the push she needed to finally think for herself. You don't get to see a lot of Harrison in this book and while this might have frustrated me, Melissa Pearl was able to keep me excited and addicted even without such an important character in the story. I loved the build up of the story, sometimes books lose sight of what is important in a book and just have many subplots without a major one.

As for the characters, I really did get frustrated with Gemma at the beginning but only because I'm the reader and we all know that readers are the Know-It-Alls (in fiction, not sure about real life) but I had to keep on reminding myself that if it was my parents I would have been as stubborn, if not worse than her. Harrison was a bit mushy mushy to my taste at the beginning but I guess that's how young love is right? as for Gabe, I have to admit that HE was my favorite character in Black Blood. He takes up some of the comic relief from Gemma's twin siblings Dom and Ruby because they don't appear as much in this book. Overall Black Blood was a great sequel that did not disappoint! I would recommend to any fans of time traveling to seriously pick this up! also for all readers because this has a bit of everything, contemporary lovers, this is a good one!

Unputdownable! Tension and 'I have to find out what happens' fuels you through this book. It was an awesome sequel to GOLDEN BLOOD and (my husband will kill me but) book 3 in this trilogy, PURE BLOOD, awaits me. Chores can wait!!

(reviewed 4 months after purchase)
Kelly reviewed on March 7, 2012
(no rating)
I had CPR class today but I kept sneaking in some reading whenever I could because I couldn't put it down. Things are happening in this book and by the time you get to the end, you are a nervous wreck! I feel for Gemma and Harrison and Gabe and I don't want any of them hurt! Their pain was my pain! I did have to take an hour off to make dinner and settle my nerves before I could do anything else!

It's a good thing I have the next book handy!

Betrayal by those you love is something that hurts the most. That is what Gemma experiences when her parents intervene in something close to Gemma, because they have her best interests at heart. What Gemma doesn’t realise is that it is all for their own gain. They want their daughter to be solely focussed of them, and their needs of her.

I just love the way that Gemma and Gabe’s relationship forms. There are snippets in there that can be confusing to Gemma, but that are so sentimental to Gabe. You, as the reader, wonder what on earth he has been doing all of her life… Yes, Harrison is trusting of him, and that seriously upsets Gemma, but without that trust, she never would have had the guts to go against her own family code and trust a stranger.

Melissa Pearl has done an amazing job with the second book of the Time Spirit Trilogy. Personally, I feel that this book is even better than the first, but without the first, the story would be incomplete. (Don’t get me wrong – I really LOVED the first book as well!) I can’t wait to read the final instalment! I simply have to know what on earth is going on with certain character motivations.

Black Blood is a great read. Well paced and a real page-turner. Loved it even more than the first book, Golden Blood. The characters are well developed and the plot quite suspenseful as you're not quite sure what's going to happen next. Can't wait for the next installment!!

Another fantastic book by Melissa Pearl! The triology just keeps getting better. I found it just as exciting & surprising as the first book, but you get the added bonus of being more emotionally drawn to the characters, because you know them so well by now. I loved it ! Awesome writing! Can't wait to read what happens next!

I was blown away by this book! The writing was excellent and the words just flowed, making it a fast read. I think this book is actually better than the first.(that's saying a lot since I loved the first.) I actually felt real emotion for the characters. I can't wait to see what happens next!!

You have subscribed to alerts for Melissa Pearl.

You have been added to Melissa Pearl's favorite list.

You can also sign-up to receive email notifications whenever Melissa Pearl releases a new book.