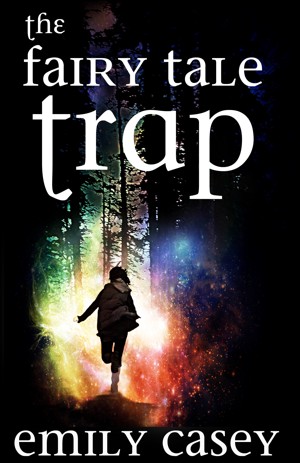 By Emily Casey
Rated 4.00/5 based on 6 reviews
A beautiful girl falls in love with a beast. Ivy’s heard the story before, but now it’s a reality. More
Ivy has never liked mirrors. So of course, without warning, one of them sucks her into the fairy tale Beauty and the Beast.

When Ivy tries to escape her fairy tale prison, she breaks the wrong spell. Now Beast is not so gentle-on-the-inside and Beauty is falling for the wrong prince. Perfect.

Emily is a writer from Tallahassee who chases two crazy kids around the house all day before collapsing in front of her computer.

She writes everything from fairy tales to zombies, from middle grade to young adult. Emily writes what's exciting to her and just hopes someone else out there likes it.

Other little tid-bits: Emily's a dog person (he has a German Shepherd named Guybrush), she likes to run (and ran her first half marathon while 4 months pregnant) and majored in Psychology (which explains why she's a little nuts) at Florida State with a minor in English (which explains the whole writing thing).

Book Trailer
A beautiful girl falls in love with a beast. Ivy’s heard the story before, but now it’s a reality.

Reviews of The Fairy Tale Trap by Emily Casey

A fantastic modern twist on a classic tale. It's fun, witty, and amusing.

When one looks at the premises, you would say that this book was inspired by ABC's Drama, Once Upon a Time, clearly gluing itself to the series premises of a fairy tale revamp. However, the story is strikingly different from the show, as it finds one character - Ivy Thorn - finding her way through one of the most familiar fairy tales - Beauty and The Beast. And, for one, doesn't feature the clichéd (clichéd because it works!) history of a savior but, yes, the story of a young girl/boy trapped as a result of an evil character's machinations and self-amusement.

Smart, funny, and with the tiny - not so tiny - bit of sarcasm to make Ivy the most lovable person in the world, The Fairy Tale Trap traps itself around your hand, as you clung to know whatever deviations and dangers Ivy will have to thorn away in order to get back, preferably save, home.

Ivy is a typical teenage girl who just happens to have a phobia about mirrors. In the midst of a ton of stress from things well out of her control, a mischievous pixie gives her one more reason to hate mirrors. She is pulled into a world she has even less control over than her normal life.
Emily Casey does a fine job of bringing Ivy into the realization that not everything is about her. She manages to weave the traditional fairy tale elements into a reality that takes the reader along for the ride.

It's a lovely story despite the fact that Ivy is a little unlikeable at the beginning. She's so preoccupied that she simply assumes the words of some of the other characters. Thankfully, the author made her realize she was wrong. It was a fun read too, and it twisted one of my most favored fairy tales. I'm looking forward to the sequels, because I don't think the little elf-gnome-pixie-whatever will leave her alone.

I thought this was a unique and fun idea. I think Emily did a good job with her first novel. I'm excited to see her grow as an author.

One part classic "Beauty and the Beast", one part modern coming-of-age. "The Fairy Tale Trap" is a tense tale with humor and heart. Ivy is a character any reader can latch onto and root for.

You have subscribed to alerts for Emily Casey.

You have been added to Emily Casey's favorite list.

You can also sign-up to receive email notifications whenever Emily Casey releases a new book.