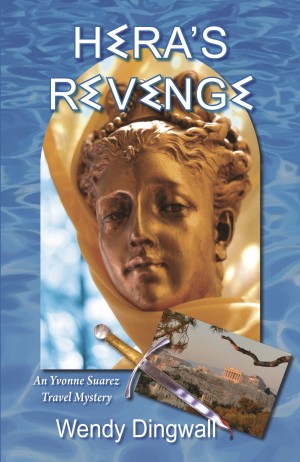 In "Hera’s Revenge," when an airport employee turns up dead in baggage claim upon their arrival in Athens, the Pinkerton Travel Group gets off to a rocky start.

David Ludlow needs a vacation from his stressful job, and this itinerary to the land of mythology, Greek philosophers and early democrats is just the ticket to a leisurely escape, until grumpy passengers, missing museum art, and deadly accidents plagued their journey.

A reluctant sleuth, Yvonne, pulls out all the stops to keep her clients safe and her tour on track..

Wendy Dingwall operated her own travel business in South Florida for over 12 years. In 2001 she moved to the mountains of Northwest, North Carolina and began writing her first mystery novel, fulfilling a lifelong dream. Two years later she began working for a local book publisher, marketing authors and their books. In July 2009 she opened her own publishing company and by the spring of 2011 she had published 13 books by various notable Southern authors. She continues to work on the second and third novels in her Yvonne Suarez Travel Mystery series.

She currently resides on a 50 acre farm near Boone, NC with her husband, Walter, their 2 maltese dogs, 1 cat, and miscellaneous wildlife.

Follow travel agent, Yvonne Suarez across the globe as she uses her research and sleuthing skills to carry readers on exciting adventures, while being entertained with a good mystery.

You have subscribed to alerts for Wendy Dingwall.

You have been added to Wendy Dingwall's favorite list.

You can also sign-up to receive email notifications whenever Wendy Dingwall releases a new book.