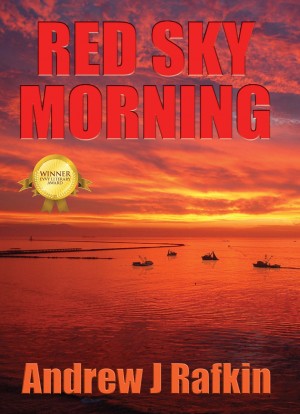 Andrew launches his tale of high adventure working on his father’s commercial fishing boat.
In port the crew partied, at sea they caught tuna, and were continually tested by the elements.
Two years later, fishing off the Santa Barbra coast,the crew gets caught in a huge freak storm of hurricane force, and spent the next terrifying twenty-four hours battling for their lives.

About Andrew J Rafkin
Andrew J. Rafkin, was born in 1946 in San Pedro, California, grew up in a commercial fishing family. Through high school, he worked on sportfishing boats, and at seventeen went commercial fishing with his father, captain of a large Purse Seiner, during summer vacation. Two years later, he worked aboard a ninety-foot fishing boat, which was caught in a hurricane force storm where Andrew almost lost his life. These events later served as inspiration for his first nonfiction true-life adventure, Red Sky Morning.
He served in the Navy during the Vietnam War and later graduated from California State University, Dominguez Hills, with degrees in economics and marketing. He is a successful entrepreneur, president of Palos Verdes Security Systems, and certified by the Department of Homeland Security. He relies on his experiences to craft the Madness trilogy; the start of the ongoing action thriller series that tackles the major concerns of a post-9/11 world. Unlike the competition, his work resounds with authority and demonstrates how the private sector can join the fight against global terrorism.
Andrew has received the EVVY literary award for Red Sky Morning and the Readers Favorite Awards for his Madness trilogy Creating Madness, Mediterranean Madness, and Mexican Madness.
He has co-authored with Louis Pagano to write Angels Gate, now available, and currently considered for a future movie.
Rafkin’s completed his new novel, Reaper Six, a true gripping story about the leader of a, Special Black Ops team missions, during the Vietnam War.
He lives with his wife, Lynn, in San Pedro, California, and spends his spare time reading, fishing, hunting, golfing, and making wine.
Visit his website: www.andrewrafkin.com

You have subscribed to alerts for Andrew J. Rafkin.

You have been added to Andrew J. Rafkin's favorite list.

You can also sign-up to receive email notifications whenever Andrew J. Rafkin releases a new book.