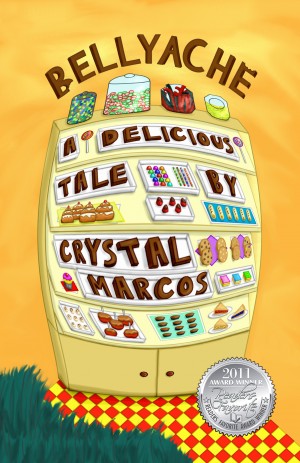 By Crystal Marcos
Rated 5.00/5 based on 1 reviews
This wildly scrumptious, deliciously fun children's story for ages seven and up basks in the sweet aroma of a whirlwind fantasy-adventure as it teaches a big lesson on forgiveness and making peace. More
BELLYACHE: A Delicious Tale Awards & Honors:

5 Star Review- The author is talented and imaginative. This is a delightful tale sure to please elementary age students. I eagerly await the next offering by this author. -Readers Favorite

5 Star Review- Crystal Marcos provides a moving tale to help us learn to forgive, no matter how hard it is. Although this is her first book, she displays through it her startling ability to teach a difficult matter in a fun and appealing way that children will understand. Kids will want to read this book over and over again! -Cecilia Lee, Allbook Reviews

A lip-smacking, mouthwatering, absolutely delectable debut, BELLYACHE: A Delicious Tale by Crystal Marcos is a literary feast for ages seven and up. In the vein of Roald Dahl's best-loved adventures, Marcos offers a mystical, character driven escapade that intertwines strands of reality with a larger-than-life fantasy world. When Peter Fischer sets out to help his grandfather at Papa's Sweet Shop, he will quickly learn that sneaking sweets and covering up his sugar-dusted tracks will have major consequences. As Peter is transported to a mysteriously delicious, faraway land, a curious people known as the Candonites, some of whom have no time for a non-Candonite, will teach Peter a lesson on what it means to be different and what it means to forgive.

Look for Marcos' exciting second book in the children's series, HEADACHE: The Hair-Raising Sequel to BELLYACHE.

Award-winning author Crystal Marcos has been a storyteller her entire life. As the oldest of five children, she had to do a lot of entertaining. She lives on the Kitsap Peninsula in Washington State with her husband, daughter Kaylee, and infant son Jaxon. Crystal is the author of BELLYACHE: A Delicious Tale and HEADACHE: The Hair-Raising Sequel to BELLYACHE. Novus, her third book and first Young Adult novel, is Book One of The Cresecren Chronicles.

This review contains excerpts of reviews of Bellyache completed by myself, my daughter, and my son. For the full review, please go to www.motherdaughterbookreviews.com

I liked the Candonite people, the peppermint cat, and the marshmallow birds and wondered what they would look like in real life. All I could think of were yellow and green gingerbread people. I really wish there were pictures of the Candonites so I could see what they looked like. I wish I could have been Peter so that I could go to Maple Town because I would like to meet the Candonites. The food sounds gross though, like the brussels sprout pie. I liked Lina and wished that there was more of her in the story because she was funny and brave.

Maple Town was a cool place because they ate the same kind of food as humans, except for candy because that's what they are. I would be fine in Maple Town because I don't like candy all that much. The pointing trees and floating cars were cool too. I liked that the grass was bluish-green that matched bushes and trees because those are two of my favorite colors.

I REALLY liked this book because the story was cool and inventive. I would highly recommend this book to my friends, both girls and boys. I am really looking forward to reading the next book.

I really liked the marshmallow birds, peppermint cat, and the people made out of candy (the Candonites). I also liked the Peblars because they had glowing yellow eyes that came out of the wall - I thought that was funny. One of my favorite lines in the story is when Joe, a Candonite boy says:

I decided to read this book aloud to my two children over the course of one week. They were begging me each night to read a bit more. This is a reflection of how original, imaginative, and riveting this story really is for children even as young as 5. The children's books I have read are largely predictable, but this story has so many twists and turns that it keeps you guessing what will happen next throughout. Further, as far as fictional settings are concerned, Maple Town is like nothing I've read before. In short, the plot and the setting are very unique and intriguing.

While not giving away too much of the ending, it is worth it to note that there are important and valuable lessons to be learned in this story: compassion, understanding, and forgiveness. Marcos spins a tale where tension between the characters is nearly inevitable: human meets candy person; human likes to eat candy; candy person is afraid of being eaten! You'll have to read the story to find out if Peter and Lina show restraint. ;)

A couple of small issues I had. First, my kids and I agree that if they were whisked off to a strange land, they would not want to stay there. They would miss their Mommy and Daddy terribly and would want to come home. Ok, maybe I planted that idea in their head!

We all agreed that we wanted more of Lina in the story. This series of books (with the second one coming in March, 2012) could have wider appeal to both boys and girls if Lina's character becomes more fully developed and integrated in the next books. Crossing fingers for more Lina!

I really, really enjoyed this story. I would recommend the book for both boys and girls who are at least 8 years old. I have to admit that it was a bit difficult to read aloud to the kids, but the proof is in the pudding: They loved it!!

You have subscribed to alerts for Crystal Marcos.

You have been added to Crystal Marcos's favorite list.

You can also sign-up to receive email notifications whenever Crystal Marcos releases a new book.