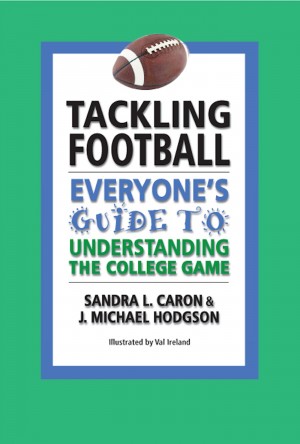 Note: This is essentially the same book as our earlier book targeted to women fans, "Tackling Football: A Woman's Guide to Understanding the College Game" - this version has a different color scheme, new introduction, and is designed and marketed for both men and women who want to understand the very basics of the game.

J. Michael Hodgson has more than 30 years of experience with college football, including his role as a player and a football coach for several colleges. He played football for the University of Maine where he was a three-year starter at tight end and also handled place kicking duties. He began his coaching career there, working with tight ends, the offensive line, and running backs before moving to Princeton University as wide receivers coach and the passing game coordinator. He went on to become head coach for Maine Maritime Academy. He was the offensive coordinator and quarterbacks/wide receivers coach at Central Connecticut State University, and then served as quarterbacks and receivers coach at Edinboro University in Pennsylvania. Most recently, he was offensive coordinator and running backs/tight ends coach for Dartmouth College.

You have subscribed to alerts for Sandra L Caron &amp; J Michael Hodgson.

Would you like to favorite Sandra L Caron &amp; J Michael Hodgson?