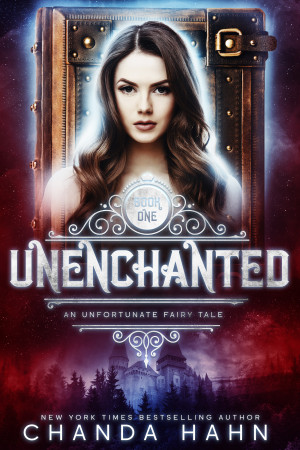 Chanda Hahn is a New York Times and USA TODAY Bestselling author. She uses her experience as a children's pastor, children's librarian and bookseller to write compelling and popular fiction for teens. She was born in Seattle, WA, grew up in Nebraska and currently resides in Portland, Oregon with her husband and their twins.

Reviews of UnEnchanted by Chanda Hahn

i liked the fact that it was based on fairytales.it was quite cool.However i would like Mina to be a bit older than 16 and out of school

I'm a big fan of fairytale retellings, and UnEnchanted didn't disappoint, although I found the concept slightly derivative. As a fairytale retelling it was competent, as a high-school story it was competent, and all round the book was a pleasant way to idle away a couple of hours. But somehow it never realised its early promise; it was not so much that there was anything missing - klutzy, lovable heroine, check - loyal sidekick, check - ancient evil, check - just that there was nothing special to make this book rise above the great mass of similar books out there.

It was a very interesting book, I really enjoyed reading it. I can't wait to read more.

I downloaded this book because it was free. And I loved it so much that as soon as I finished reading the last page, I went back to Smashwords and bought books 2 & 3.

What I liked:
-Originality. I’ve never read another book like this before, so it automatically gets points for that. The book had an interesting premise, one that drew me in from the very beginning. I’ve always loved my old fairytales, and it was nice to read a more adult version that was more dangerous and exciting.
-Mina. I liked the main character, and for once, I liked not being trapped inside her inner thoughts throughout the entire book. This was told from third person, giving us some space between the angst-filled thoughts of a lovesick teenager, which made her more relatable and more bearable.
-Jared. I wasn’t sure whether to add him under “liked” or “disliked”. I liked that he wasn’t clear about his loyalties, and I liked that Mina didn’t know whether to trust him or not. But I honestly think the whole “trust-a-complete-stranger-because-I-say-so” thing gets old really fast, and it’s way overused in young adult fiction. I also disliked that he’s obviously going to be a future love interest for Mina, probably during the second book.

What I disliked:
-Punctuation. The quotations marks were really weird when I read this story. They were used incorrectly. There were also some questions marks where other punctuation should have been used. The punctuation bothered me a bit while reading and was slightly distracting, but it wasn’t enough to make me stop.
-Brody. He’s the standard perfect love interest—rich, popular, super handsome, friendly, kind, and famous—which makes him boring. He and Mina’s relationship was rushed and fake, and it did absolutely nothing for me. Honestly, I felt like the whole romance angle was just a way to pad the story. To me, it didn’t seem to have any kind of purpose other than to give Mina something to angst over. I hate love like that

I found this book to be rushed and poorly written. The chapters are either too long, or too short, and never focus on just one subject. The characters were barely developed at all. They all just seemed static to me. There was great potential in this, but the way the author used certain literary elements just seemed out of place, and could have done something better. Here's an example; There's a brief point before the big dance, the climax of the story, where it's suddenly said that Mina's mother was scared of Little Red Riding Hood as a child. That was very last minute and tacked on. If anything, that could have been used throughout the whole story, and could have been a compelling sub-plot. But no. Tacked on last minute. Chapter 13 drags on forever, and doesn't even finish the last subject it was covering, and then Chapter 14 is literally a page and a half. I felt like the author didn't have a plan throughout the story, and rushed this book out.

Simply wonderful!!!! I really enjoy reading this story because it's well written and the characters are fantastic! I'll read the sequel as soon as I can!! :) :)

Good story, I am excited to read the next book.... Please hurry!

While I enjoyed the premise of the book, it felt rushed. The character development was lacking and the dialog between characters was pretty basic. They rushed into their given roles and stayed there. The book had "good bones" and I'm sure the author will continue to develop her skill.

You have subscribed to alerts for Chanda Hahn.

You have been added to Chanda Hahn's favorite list.

You can also sign-up to receive email notifications whenever Chanda Hahn releases a new book.