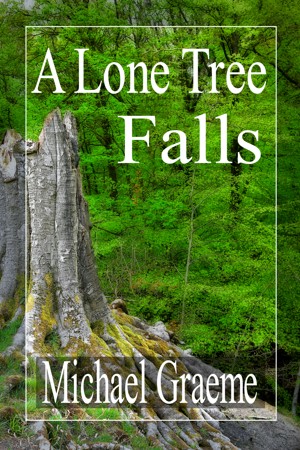 Then his old boss comes calling, wanting him for one last job: the protection of a young woman, but why and from whom, remains a mystery, one that threatens George's own quest for the ultimate truth regarding the nature of reality itself. All he knows is if he's ever to find peace again, and protect the girl, he's going to have to deal a blow to unimaginable wealth and power at the heart of the State. His only advantage is they've no idea who they're dealing with, that in a world where magic is no longer taken seriously, it helps if, like George, you're a bit of a magician, as well as a spy.
Download: epub mobi (Kindle) pdf more Online Reader
lrf pdb
Price: Free! USD
Add to Library
Create Widget
Tags: mystery political espionage dystopian existential life meaning
About Michael Graeme

Reviews of A Lone Tree Falls by Michael Graeme

Michael Graeme’s A Lone Tree Falls concerns itself with many things. Set in the rather dystopian world of present day England – at least in the eyes of the story’s narrator – it is a mystery novel, a British spy novel, a mundane fantasy, a dark warning of things to come that speculates on the mystery of life, all woven together in a literate style. If it is not literary fiction, it walks close to the line, interweaving thoughtful commentary on life, change, aging, and metaphysics together with black pebble eyed mobsters, with posh corrupt millionaires, ruthless professional spies, half mad magicians, if you believe in such stuff, and ordinary, everyday, people trying to make a go of life.

The first person narrator of this novel is one George Swift. George who is a retired spook. An analyst for the British Secret service. A backroom fellow who shot only one adversary between the eyes – in self defense – during his 30 year career which he served mostly abroad. By exchanging hotel rooms with a diplomat, a common precaution, he gets bombarded with microwave energy – or some such thing – meant for the diplomat that inflicts the foggy brain symptoms known as the infamous Havana Syndrome. No longer sharp enough to do his job, he’s retired early. Having lived largely on his per diem, he has a large bank account to see him through his retirement years, and files to keep him, hopefully, safe.

We get to know George Swift, if not Michael Graeme, pretty well in the course of the novel.

W. Somerset Maugham once wrote about first person singular stories, “As we grow older, we become more conscious of the complexity, incoherence and unreasonableness of human beings; this indeed is the only excuse that offers for the middle-aged or elderly writer, whose thoughts should more properly be turned to graver matters, occupying himself with the trivial concerns of imaginary people. For if the proper study of mankind is man it is evidently more sensible to occupy yourself with the coherent, substantial and significant creatures of fiction than the irrational and shadowy figures of real life. Sometimes the novelist feels himself like God and is prepared to tell you everything about his characters; sometimes, however, he does not; and then he tells you not everything that is to be known about them, but the little he knows himself; and since as we grow older we feel ourselves less and less like God I should not be surprised to learn that with advancing years the novelist grows less and less inclined to describe more than his own experience has given him. The first person singular is a very useful device for this limited purpose.”

I can’t say if Graeme’s George Swift is much like himself, but George has a lot to say about himself, and the world he finds himself back in, after so many years abroad. Less so, about some of his other characters, as befitting a novel concerning the secret service, and indeed, the even more secret world of mystics and magicians who have explored the universe we live in and have found ways to tap it, and, at the risk of madness, manipulate it. In this shadowy world where magic, or the knowledge of the universe exists that allows for its manipulation, George Swift is merely a mystic. He understands it, a little, and gains insight but does not manipulate it. Though foggy-brained and pushing 60, if not beyond, George is a deceptively dangerous man. He still knows how to play the game, and plays it well, if cautiously.

The story opens with George returning to the midlands town of his youth to settle the estate of his recently deceased father. He finds himself a stranger in a strange land. The England of his golden youth is now uglier, poorer, and far more corrupt than the land he remembered, as we all find when we return, after a long time, to the land of our own golden youth. He has much to say about this dystopian England that he sees around him, and in the first 50 or 60 pages of this novel, the plot thread hangs, almost unseen, on a meadow with an ancient tree decked with ribbons with cryptic runes in cipher, a faceless company trying to buy that meadow in order to turn it to more cheap houses, a black pebble eyed gangster with two vicious dogs who now lives behind his childhood home playing loud music at all hours, and nice girl that serves him coffee. I mention this only because the deeper plot is slow to get started. It starts with a trickle. Patience must be had. And indeed, even as the plot turns into a steam, it still winds and weaves its way through many thoughtful observations, inner thoughts, and conversations with you, dear reader.

At any rate, the secret service, or elements of it, are interested in that meadow, or rather the girl connected to the meadow – who seems to be a rather special girl, a girl with special talents – who George met at the coffee shop and again at the garden shop. She opposes the sale of the meadow, wrote the runes hanging on the tree, and is in some sort of danger. By chance, George’s presence in this part of England, his rambles through his old haunts, including the tree and meadow, are observed by his old employer, tying him to this girl, sparking the interest of his old secret service boss. George is summoned, questioned, and then assigned the task of keeping this girl safe from someone or something unknown.

And that, I think is as far as I will go into the plot. I hate spoilers and reviews that summarize the entire story. All I will say about the plot, is that while this novel serves up much more than just the plot – from speculation about how climate change will alter the very fabric of Britain to how the universe works – do we create it in our own minds, so that a lone tree that falls makes no sound if we don’t hear it, or are we products of a dreaming universe – that there is, in fact, a strong, well constructed plot that leads to a satisfying conclusion. In short, however much this river winds, it finds the sea at last. That said, I suppose that if you stopped reading this review some time back, you probably would find Graeme’s The Lone Tree Falls not to your taste. But if you happen to find yourself still here, I think I can safely say that you will enjoy this novel. I highly recommend it.