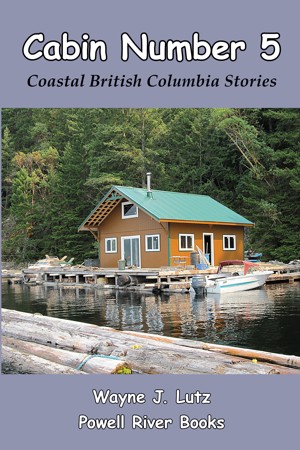 From 1980 to 2005, Wayne Lutz was Chairman of the Aeronautics Department at Mount San Antonio College in Los Angeles. He led the college’s Flying Team to championships as Top Community College in the United States seven times. He has also served 20 years as a U.S. Air Force C-130 aircraft maintenance officer. His educational background includes a B.S. degree in physics from the University of Buffalo and an M.S. in systems management from the University of Southern California.

The author is a flight instructor with 7000 hours of flying experience. For the past three decades, he has spent summers in Canada, exploring remote regions in his Piper Arrow, camping next to his airplane. The author resides during all seasons in a floating cabin on Canada’s Powell Lake and occasionally in a city-folk condo in Bellingham, Washington. His writing genres include regional Canadian publications and science fiction

Raising the Walls
John uses a winch and ingenuity to raise one of the walls for Cabin Number 5.

Also in Series: Off the Grid Living

You have subscribed to alerts for Wayne J Lutz.

You have been added to Wayne J Lutz's favorite list.

You can also sign-up to receive email notifications whenever Wayne J Lutz releases a new book.