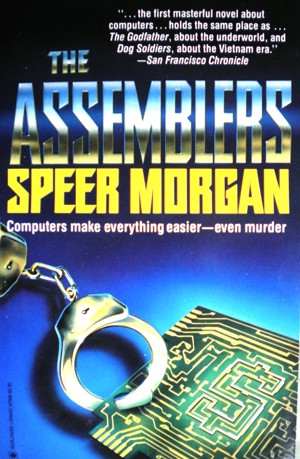 By Speer Morgan
Rated 5.00/5 based on 1 reviews
An underground classic about computer fraud and murder in a small Arkansas town. A coon hunter stumbles onto a trailer full of brightly lit computer terminals and one electrocuted corpse, as schemes and scams and a seemingly superhuman computer turn a sleepy southern town into a high-tech hotbed.

“A joy and an education for the discriminating lover of the well-plotted thriller"
Kansas City Star More
A coon hunter stumbles onto a trailer full of brightly lit computer terminals… and one electrocuted corpse. A cop stops a car with the drug-wired daughter of the president of DataForm — a transplanted Silicon Valley security firm.

There is something rotten in Dubois, Arkansas.

“You don’t have to know anything about computers to… appreciate the intricacies Speer Morgan has dreamed up.”
— Los Angeles Times Book Review

“…should appeal to the computer buffs who like their techno-jargon straight and their stories complex.”
— New York Daily News

“…can be read and enjoyed by computer jocks, thriller nuts, lovers of fine fiction and those who enjoy a peek into life in a small town. In short, everyone.”
— Kansas City Star

“A fascinating venture into the world of computer crime that results in real murderous crime.”
— Arkansas Gazette

Born and raised in Fort Smith, Arkansas, Speer Morgan is the author of five books. His first novel, published in 1979, was set in Arkansas and the Indian Territory during the late 1800s. Among his other four novels, three have been set in Arkansas and Oklahoma - one in 1894, another in 1934, and another in the 1980s."The Whipping Boy" (1994)was aided by an NEA Individual Fellowship in fiction. His latest novel, "The Freshour Cylinders"(1998), won Foreword Magazine's Silver Award for the best book of the year. It also won an American Book Award in 1999. Morgan teaches in the English Department at the University of Missouri where he has edited The Missouri Review for 30 years.

You have subscribed to alerts for Speer Morgan.

You have been added to Speer Morgan's favorite list.

You can also sign-up to receive email notifications whenever Speer Morgan releases a new book.