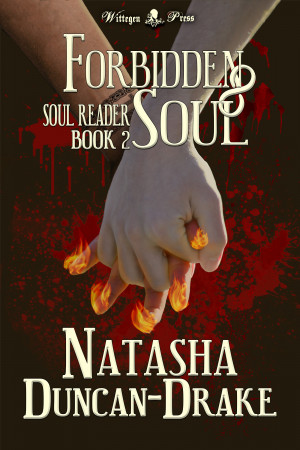 Rated 4.75/5 based on 4 reviews
John's life used to be risky, but it had been simple. Allowing vampires to suck his blood had never been safe, but now there is Michael and having a vampire who actually cares about him is complicated. Michael is urging him to reconnect with the family he lost when kidnapped. His recent past also doesn't want to die quietly and is making his life less than easy and it's about to become deadly. More
This is the second book in the Soul Reader Series. This series is a selection of free short stories and bargain price novella length books.

John's life used to be on the risky side, but it had been simple. Allowing vampires to suck his blood had never been safe, but now there is Michael and having a vampire who actually cares about him is complicated. It's even more complicated because Michael is urging him to reconnect with the family he hasn't seen in over five years. The fact his recent past also doesn't want to die quietly is making his life less than easy and it's about to become deadly.

Natasha is a British author with Wittegen Press and has been publishing genre fiction since 2011. Her work includes everything from horror to young adult fantasy and she has never met a genre she didn’t like. A prolific producer of short stories and novels alike, Natasha currently has over twenty five titles in her back catalogue with further releases always imminent.

Natasha has been writing since she was a young girl ever since she read The Hobbit at Primary School. She is a big fan of science fiction, fantasy and horror in all their forms and is a big advocate of fanfiction as a great tool for writers to polish their skills in a welcoming and supportive community.

Before establishing Wittegen Press with her twin sister, Sophie Duncan, Natasha was a database and systems consultant. She combines these skills with her writing to create and manage her career in the bold new eBook market.

Forbidden Soul is the second book in the Soul Reader series by Natasha Duncan-Drake and the story continues on roughly three weeks after the first. Michael, a vampire who has recently saved soul reader John from a captured life, has been encouraging his lover to re-contact his family. Once a phone call has been made, both of them make a special trip up to Glasgow to see John's family.

One of the things I enjoyed about the first book is the characters. The same with the second; I think that all of them have some fairly interesting portion in the story. However, like my point about the first book,I think that we just don't get to know enough about the characters. There are little touches which make them all somewhat special, but apart from John and Michael, we just don't get to spend enough time with a lot of the people. Though, having said that, I don't think I think John's family fit into the whole book. I think it was sweet how we got to meet them and they were very interesting, with the author's little explanations. However, I think their inclusion to some scenes made things a little bit strange. I understand that they were very caring for John and his healing from injuries... But the sexual scenes and references about the family home felt awkward, in my opinion. I was interested to see the other vampires and enjoyed seeing more of their culture. I'm still enjoying the relationship between John and Michael; they seem to have genuine feelings for each other and I think that the author has written their love for each other very well.

I liked both of the plots in the book, the one with John coming back to his family and also with the kidnapping. Once John comes back to his family, he explains what has happened in his time away. Though, I think most of that was essentially a repeat of what we already knew and had found out in the first book. The same with the kidnapping plot; we didn't really find out anything new to the plot. However, I appreciated that there was some movement by his kidnappers and that they really did need John's power. But, ultimately, it was also just elements of things we had already known. Again, I liked the addition of the vampire and supernatural portions, but I just don't think that the story focuses enough on developing those bits. All of the books in the series (so far) are just so short, but I think they could work much better if a lot of these bits were focused on more and developed into a full plot line. It is well written and the author has a great style, but I just wish we got more development of the plot.

Overall, I liked the story and will be reading the third book.

I absolutely LOVED this book.
It was the perfect sequel to Forgotten Soul! A great read at an absurdly cheap price! lol...

If you had doubts about getting this, wipe them away, This was perfect and totally worth it! (and worth so much more)

(Don't forget the first book is free and worth the read!)

(reviewed 8 months after purchase)
Sandra R reviewed on Feb. 26, 2012
(no rating)
Great sequel to Forgotten Soul! Really these aren't quite novellas, but there's so much substance I just don't have the heart to call them short-stories. This felt so much longer than it actually was, and I mean that in a good way. It didn't drag, but so much happened with respect to plot as well as character development that it was just as satisfying as a full length novel (which as everyone knows, is usually the problem we encounter with short-stories and even novellas sometimes). I hope there is more to come from these two! I'll definitely be looking into Ms. Duncan-Drake's other works!

(reviewed 21 days after purchase)
Loveless3173 reviewed on Feb. 15, 2012
(no rating)
I absolutely LOVED this book.
It was the perfect sequel to Forgotten Soul! A great read at an absurdly cheap price! lol...

If you had doubts about getting this, wipe them away, This was perfect and totally worth it!

I'd be so thrilled if there is more to this series, but this would be a perfect end!

****(Don't forget the first book is free and worth the read!)

It's a shorter story and I don't want to spoil the plot, so I won't go into details on that here. Suffice to say, John and Micheal's chemistry is just as hot this time as the last, and the mythos of the universe just keeps unfolding in new and interesting ways. I look forward to further installments in this series!

You have subscribed to alerts for Natasha Duncan-Drake.

You have been added to Natasha Duncan-Drake's favorite list.

You can also sign-up to receive email notifications whenever Natasha Duncan-Drake releases a new book.