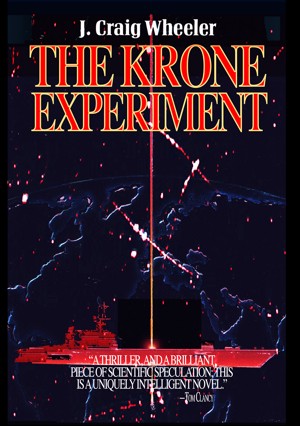 By J. Craig Wheeler
Rated 5.00/5 based on 1 reviews
A group of intelligence experts must track down the source of a mysterious seismic signal that is causing pinpoints of destruction around the globe. When the team finally uncovers the truth about the Krone experiment, they discover a ticking doomsday clock, one whose hands cannot be turned back, whose unstoppable pendulum swings through the very Earth itself. Also read the sequel, Krone Ascending. More
This techno-thriller novel is set at the time of the break-up of the Soviet Union, yet reflects today's headlines. Damage to a Russian aircraft carrier leads to a breakdown in the detente with the United States. Star wars erupt as the two countries invoke space-based weapons in a deadly face off in orbit. Robert Issacs, Deputy Director of Scientific Intelligence for the CIA, and his top aide, Dr. Patricia Danielson, connect the carrier damage with a mysterious seismic signal. Thwarted by internal CIA politics, they put their careers at risk to engage in an unauthorized consultation with Jason, the secret group of physicists who consult for the government. Astrophysicist Alex Runyan advances a fantastic theory that triggers a race for the truth before the conflict with Russia can spin out of control. The quest leads to the New Mexico laboratory of Paul Krone. The true danger dwarfs that posed by the international crisis. Bonus links to historical background material are provided at the end of the book. The Krone saga continues in the sequel, Krone Ascending.

J. Craig Wheeler is the Samuel T. and Fern Yanagisawa Regents Professor of Astronomy at the University of Texas at Austin, where he is a member of the Academy of Distinguished Teachers at the University of Texas and recipient of a Regents Outstanding Teaching Award from the University of Texas System. His research interests are supernovae, black holes, gamma-ray bursts and astrobiology. He has published about 300 papers in refereed journals, numerous conference proceedings, and edited five books. He served on the Space Studies Board of the National Research Council from 2002–2006 and was co-Chair of the NRC Committee on the Origin and Evolution of Life from 2002–2005. He served a two-year term as President of the American Astronomical Society from 2006 to 2008. 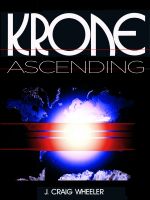 Without question one of the finest science fiction thrillers ever written. The level of suspense that the author generates builds to an incredible climax as the investigation team finally realize the cause of several tragic world events and then work feverishly to find a solution that will save the planet.

My only complaint was that the highly talented and indeed distinguished author of this incredible piece of work ended it with a cliffhanger, a cliffhanger that I have thought about and brooded over these last 20 years. But now there is finally an answer to those long standing questions, because J Craig Wheeler has penned a sequel - Krone Ascending, and I literally cannot wait to read it.

This work of near scientific perfection will go undiscovered by millions of dedicated science fiction fans who will never experience it's delights, and that is a tragedy.

Buy it and read it - it will be the best decision you make this year.

(review of free book)
Meg Stone reviewed on March 24, 2014
(no rating)
Gave up before finishing, so not rating this work.

From the blurb, The Krone Experiment sounded great. I noticed it has a sequel that's a little expensive, but I love getting into a good book or even a series if it's plausible fiction and well written so that didn't stop me from giving this a try.

Unfortunately, it didn't grab me. E-reader says I got 10% in and this is a long book, so I think I've given it the good ole college try. It wasn't making sense to me until I realized it had been published in 1986. I was trying to figure out what was going on in the context of a contemporary work until mention of the Soviets clued me in. It has a great opening. Full of suspense and atmosphere then it slows down too much for my taste.

The author bio wowed me, big-time. The story idea is great. Personally, I think The Krone Experiment could sizzle if it shed some weight, got some updating and spent some time with a good and ruthless editor.

You have subscribed to alerts for J. Craig Wheeler.

You have been added to J. Craig Wheeler's favorite list.

You can also sign-up to receive email notifications whenever J. Craig Wheeler releases a new book.