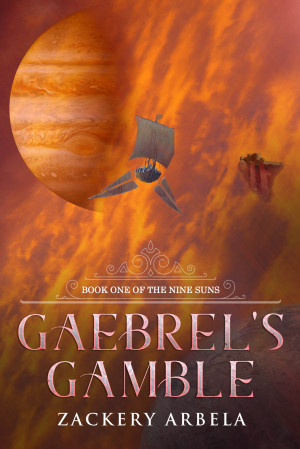 Gaebrel's Gamble (Book One of the Nine Suns)

By Zackery Arbela
Rated 3.00/5 based on 1 review
Gaebrel Harrn is a thief. A smuggler. A wanderer. Abandoned by his father, he survives by his wits. Always a step ahead of his enemies, winning the day with his charm, his words...and when all else fails the sharp edge of his blade.Together with his companions he will embark of the greatest adventure the Nine Suns have ever known. More
"Nine Suns there are, nine watchers, nine masters. The worlds their children. The races their seed, the soul the shards of their intellect, the Empyrean the workshop of their divine labors. Who among us has the wisdom to hear their voices, to know their words written?"

Gaebrel Harrn is a thief. A smuggler. A wanderer. Abandoned by his father, he survives by his wits. Always a step ahead of his enemies, winning the day with his charm, his words...and when all else fails the sharp edge of his blade. Knocked down by fate, he rises again, swifter and stronger.

Together with his companions he will face off against a bloodthirsty pirate queen and her marauding fleet, steal a mighty treasure from under the noses of its magic-wielding owners, face death and betrayal as they sail into battle against Ulzarad the Neverborn, a soul-devouring monster in search of the perfect prey.

Fleets gather in the Empyrean, carried between worlds by the Celestial Winds, shaping the fate of nations with blood and cannon fire. Arcanist's call upon the ineffable mysteries of the Aethyr in their search for power while spies plot in the shadows. Join Gaebrel and his companions as they embark on the greatest adventure the Nine Sun's have ever known!
Download: epub mobi (Kindle) pdf more Online Reader
rtf lrf pdb txt
Price: Free! USD
Add to Library
Create Widget
Tags: adventure fantasy sword and sorcery epic fantasy fantasy action adventure fiction novel epic saga fantasy about a wizard sorcery fantasy fantasy action adventures
About Zackery Arbela

The physical body of Zackery Arbela lives somewhere in the wilds of New England. The mind of Zackery Arbela can be found wandering the various planes and adornments of the temporal spheres, from whence he sometimes returns with new and fantasickal tales to tell.

Disclaimer: I was given a free copy of this book by the author in exchange for an honest review.

Gaebrel is a smuggler, abandoned by his father and forced to make his own way in the world. After a few misadventures, he finds himself and prisoner and a slave on a desert-planet in the middle of nowhere, and along with the other slaves, hatches a cunning plan to steal something for the First Captain, and earn themselves their freedom. Of course, it all goes horribly wrong, and now there's a price on their heads and they find themselves fighting for their lives.

Overall I enjoyed this book. Gaebrel is a great characters - smart, witty, resourceful - and generally fun to read. The other characters that make up his little band of smugglers are all diverse and interesting, and my favourite parts of the book are the banter that usually goes on between them, especially when their divers view and values clash.

There are some areas of this work that need some improvement. The first was paragraphs of the prologue were too long and too much and information dump - the real action starts when Gaebrel comes on scene, and I think that would have made a much better beginning. There are the occasional typing and grammatical errors, and a few places where a line will become a new paragraph mid-sentence, which really hampers the flow and continuity. Also, there's one spot where I swear the wrong character's name was mentioned, and it turned a dramatic battle moment into a confusion. I also disliked the used of headings such as "HURREN'S TALE" and "one month later"; I felt they really stopped the flow the story, and with a little work this could have been simply added into the prose and made everything a lot more seamless.

However, this was off-set by some fantastically witty phrases from the author that genuinely made me laugh out loud, such as:

"Certain things were to be expected when a city fell to an invading army, among them the obligation of the attackers to break anything that that could be easily picked up and hurled with great force, provided of course it was of little worth. Gaebrel wondered if there wasn't an intact chair left in Isunla by now."

But, overall, a decent book and an enjoyable read. 3/5 stars.

You have subscribed to Smashwords Alerts new release notifications for Zackery Arbela.

You have been added to Zackery Arbela's favorite list.

You can also sign-up to receive email notifications whenever Zackery Arbela releases a new book.