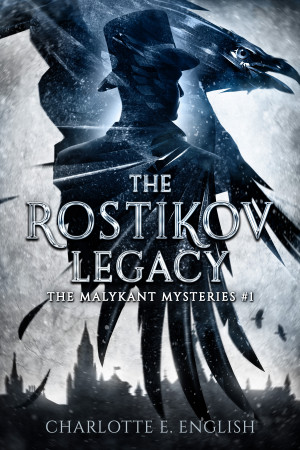 By Charlotte E. English
Rated 4.50/5 based on 4 reviews
Konrad Savast is Death’s most trusted servant, charged with finding and punishing the vilest of killers. When he discovers the body of a wealthy society hostess lying in the cold, mist-shrouded reaches of the Bone Forest, the pressure is on to find her killer. Can he catch the killer without revealing himself as the Malykant? More
Detective. Judge. Executioner.

In an icy, Victorianesque world, a harsh god rules, and He has one law: a life for a life.

Konrad Savast is the Malykant: detective, judge and executioner in one. It's kill and be killed in Konrad's world, and his unhappy duty to mete out his Master's implacable justice.

The body of an aristocrat lies in the mist-shrouded reaches of the Bone Forest. Her killer has signed their own death warrant; but first, Konrad must learn who could have wanted the delightful Lady Rostikova dead...

With a pair of bloodthirsty ghosts to assist him, Konrad will hunt her ladyship's killer the length and breadth of the city — and stop at nothing to finally bring them down.

English both by name and nationality, Charlotte hasn’t permitted emigration to the Netherlands to change her essential Britishness (much). She writes colourful fantasy novels over copious quantities of tea, and rarely misses an opportunity to apologise for something. Spanning the spectrum from light to dark, her works include the Draykon Series, Modern Magick, The Malykant Mysteries and the Tales of Aylfenhame.

About the Series: Malykant Mysteries

Konrad Savast is the Malykant: foremost and most secret servant of the God of Death. His job? To track down the foulest of murderers and bring them to The Malykt's Justice. No mercy. No quarter.

In this collection, Konrad and his closest friend Irinanda solve four mysterious murders in and around the cold, dark city of Ekamet.

Creepy, atmospheric, and fascinating read. I will definitely read more of this author's work.

Konrad Savast is a man with a very peculiar mission: when someone is murdered, his job is to kill the killer. But first he has to figure out who's resposible, meaning this story is at its heart a murder mystery, albeit set in a fantasy world. The fantasy elements mesh perfectly with the mystery plot: Konrad has two spirit serpents who accompany and assist him, and his work is all at the behest of the Malykt, a cold power who has bound Konrad in his service.

I really liked the interactions between Konrad and his only friend, Irinanda (who doesn't know about his secret identity, and also has secrets and powers of her own). This is the first in the Malykant series, so I'm looking forwards to seeing how future books will develop this relationship. The bad guys were a bit less believable, but such a short format doesn't leave much space for developing all the minor characters, and this didn't really detract from my enjoyment.

This was a really fun read, and I loved the world and characters she created. I hope the author writes more stories in this setting.

A whodunit with a macabre flavor. Once I started in, I read it pretty much straight through. Charlotte spins a marvelous web.

You have subscribed to alerts for Charlotte E. English.

You have been added to Charlotte E. English's favorite list.

You can also sign-up to receive email notifications whenever Charlotte E. English releases a new book.