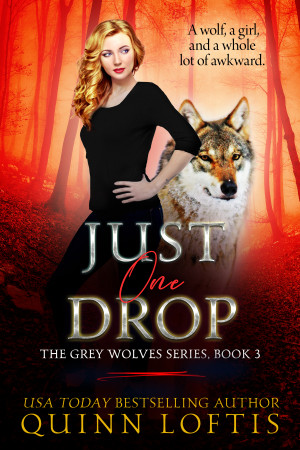 Quinn is an award winning author who lives in beautiful Western Arkansas with her husband, son, Nora the Doberman, Trixie the Shelty, and Chewy the Cat (who thinks she he is a dog). She is the author of 17 novels, and 2 Novella's including the USA Today bestseller, Fate and Fury. She also has co-written a book with her husband, Bo Loftis. Quinn is beyond thankful that she has been blessed to be able to write full time and hopes the readers know how much all of their support means to her. Some of her hobbies include reading, exercising, crochet, and spending time with family and friends. She gives all credit of her success to God because he gave her the creative spirit and vivid imagination it takes to write.

Reviews of Just One Drop, Book 3 The Grey Wolves Series by Quinn Loftis

I read this as soon as it came out... normally do all my rating etc on good reads but her book is amazing!!!

I love Jen's spunk. She is a delight to read. Do a really good last edit to catch errors and you have a winner.

My thoughts:
This is one more fantastic installment in the Grey Wolves Series from Quinn Loftis. I like it as much as I did books one and two and I am positive that I will like book four as much too.

Quinn Loftis has brought those fabulous characters, that I have already fallen in love with and completely invested in, back for another round. This story is Jennifer and Decebel's. I have been eager for them to have their own story since the beginning so I was thrilled when they did.

This story is wonderful. The writing is smooth and paced well. The word choices and story line are thoughtful, intriguing and entertaining. Emotional rollercoaster - this one had me laughing out loud - Jennifer and Decebel's reactions and interactions are somehow both heartfelt and hilarious - and on the edge of my seat - wondering if they would figure out their feelings for each other and if when they did figure it out if it would be allowed by the pack.

In this story you will find romance, mystery, deception, betrayal, love, loss, laughter, tears, friendship, heartache, honor, desire, loyalty and what it means to be family. Don't miss out on this series.

(reviewed 5 months after purchase)
Brittdstill reviewed on Aug. 2, 2012
(no rating)
Amazing I couldn't put it down. Quinn is a very talent writer. I had to read it several times and every time I'm still intrigued and can't put it down.

I absolutely love this series. The characters are extremely relatable and lovable. I recently read the most recent installment, and I am absolutely dying to read the next one. I just can't wait!!!! Each book is more and more interesting and I cannot seem to put them down.

Absolutely amazing. I looooove Jen and Dec. And it seems that Sally gets a wolf of her own. I've already bought the one after this and I can't wait for the next book! Cheers Quinn Loftis.

Really love this series can't wait for the next one. The story improves with every book. Highly recommend .

Author only improves with each writing. Other reviewers have covered story line so will just say this is a must read series. No disappointment in store for fans of genre.

This book along with the others in this series is just amazing. I love how the characters just somehow clash against each other but also blend in to one another just as easily! I am certainly looking forward to the next book and to find out what all else is in store for this group of family and friends!

First line: '"Jen you are not going back to the States so stop trying to pack your damn clothes," Sally growled.She intercepted Jen and snatched the pants she was carrying to an open suitcase, which lay haphazardly across the four poster bed. Jen steadily ignored her and did an about face to the closet to grab some more clothes.'
Ok, as you can see at the start of this book, Jen is attempting to pack her bags and jet back to the US. Where is she you ask? Well, Jen would be in Romania. Living with a wolf pack. Yes you did read that right, our Jen is living with a werewolf pack. Previously in the series, Jen had discovered she had a tiny amount of werewolf blood running through her veins, making her a dormant wolf. She should stay with her two best freinds, Sally and Jacque but a certain fur ball is causing Jen to want to run back home. The fur ball (Jen's words not mine) is named Decebel and he is the pack's Beta, but only out of choice...the damn man is dominant enough to be Alpha of his own pack should he wish. Anyway, Jen and Decebel have had sparks before in the series (though the previous novels have been about Jacque and her mate Fane) but said fur ball has run off with his tail between his legs because his wolf is not showing any signs of wanting to mate with Jen. It's been 62 days 4 hours and 22 minutes since Jen last saw Decebel and she's sick of waiting for him to show up at her door. However, when Jen's tries to leave, who should turn up but Decebel, and that's where things get interesting :)

I adored JUST ONE DROP, Jen is just hilarious. I mean Decebel is about the most dominant, manly wolf man you will ever meet and she calls him 'the fur ball'. Jen's mouth just keeps getting her into trouble, as does her spontaneous attitude. Put that together with two equally humerous sidekicks and a tightly wound alpha wolf and you're ready to have yourself a party. Quinn Loftis has written this brilliantly, we all know I love a good dose of humour in anything I read and JUST ONE DROP has that in spades :)
JUST ONE DROP is set in Romania and for the most part Jen and her two besties as well as Decebel, pack leader Vasile (whom I just adore) and a few other pack wolves are attending The Gathering. This is an old tradition amongst wolf packs revived for the 21st centuary. Due to wolves only having their one true mate, and with population numbers dwindling, the Alphas of 4 packs decide to bring back an old tradition, that is basically speed dating for wolves. All the unmated females and males of the packs gather together in one place in the hope of finding mates among the other packs. However, when you add Jen and her panchant for trouble to a highly strung, territorial alpha wolf and several sex-crazed young male wolves there's going to be bloodshed. Decebel is still trying to fathom his feelings for Jen and her natural talent for pissing him off makes for one hilarious and enthralling novel. Add to this a conspiracy to murder my darling Vasile and his mate to gain control of the pack and you have the recipe for one awesome read!
As well as keeping up with Jen and Decebel, we are also able to see how Jacque and Fane are progressing since their mating. They can speak mind to mind like all mated pairs, and I have to say that some of what Fane says makes me go all mushy and wish that I could find a real live Fane. Anyway, it's good to see what they are getting up to, I just want to see more of Alpha Vasile to be honest...he's even more dominant than Decebel, meaning he could kick serious ass :) He's the strongest Alpha in living memory and his mate Alina is so sweet...I don't hate her at all...nope ;)

All in all, JUST ONE DROP is one of the funniest new books I've read in a while. While it did take me a while to get used to the American slang Jen and her friends used it was comforting to know that none of the Romanian wolves knew what they were saying either :)
I loved every minute and will definitely be keeping my eye on Quinn Loftis and the Grey Wolves Series for the foreseeable future :)

You have subscribed to alerts for Quinn Loftis.

You have been added to Quinn Loftis's favorite list.

You can also sign-up to receive email notifications whenever Quinn Loftis releases a new book.