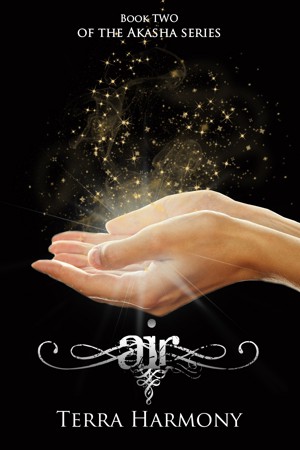 Terra is author of the eco-fantasy novels in the Akasha Series, 'Water', 'Air', 'Fire' and 'Earth', as well as the Painted Maidens Trilogy. Terra was born and raised in Colorado but has since lived in California, Texas, Utah, North Carolina, and Virginia. Terra served a 5½ year enlistment in the Marine Corp, has earned her bachelor's and master's degree and presently runs the language services division of a small business.

Terra currently lives in a suburb of Washington, DC with her husband of sixteen years and three children.

Reviews of Air by Terra Harmony

Kaitlyn is carrying a secret that only one other person knows about. She is pregnant but not entirely sure who the daddy is. It could be Micah’s, the one guy who she cares the most for. Or on the other hand it could be Shawn's, the one that kidnapped and raped her. Thankfully she has Micah’s sister, Susan, to confide in. Kaitlyn will have to tell Micah soon though, because you can only hide a growing belly for so long.

One of my most favorite scenes in the book is when Micah and Shawn both realize that Kaitlyn is pregnant. Wonderfully, wonderfully done. And what happened soon after had me grinning so big. Only thing is I am not sure how I feel about Micah. I mean I really like him but I am not crazy about his ‘You woman, me caveman’ attitude. He is very hot and cold when it comes to Kaitlyn and how he reacts with her. One moment he is all caring and loving and then the next he is acting all Neanderthal. So less caveman, more feelings and Micah would be prefect.

I will say I think I loved AIR more than WATER. And that is really saying something because I LOVED WATER. AIR is not as action packed as WATER was but I think that is what I adored about it. I enjoyed the pace the book took and how during the story Kaitlyn was able to learn more about who she is and what she can do. I also loved the addition of the Shades to the story. Even though I was a bit hesitant about them at first I thought the whole idea was genius.

I will say that this author is not afraid to push the envelope. So if you are skirmish when it comes to rape scenes…then thread carefully, there is one in here. Though it is not as horrific as with book one, rape is rape.

AIR is an incredible read that had me hanging on to each and every word Harmony wrote. In fact, I am so excited to read FIRE soon so I can see what played out after this crazy cliffhanger we were given here in AIR. I totally recommend this series if you are looking for something different than what’s out there and love a good suspenseful read that is peppered with romance.

Air, by Terra Harmony, is the second installment in her eco-magic Akasha series. Unlike a lot of sequels, it’s as good as–if not better than–the first, and has a lot of strong positives. I found the storyline intriguing, the plot sufficiently twisty to keep me interested, and I liked the imagination Harmony puts into the manifestations of elemental magic. Actually, I think that was my favorite part–the magic, with its roots in various traditions, including Wicca and what I can only assume to be Terra’s imagination, is sufficiently thought out as to be convincing and yet unpredictable enough to be fun. I loved it.

That said, there are just a few caveats. The first is that the relationship between the two main characters, Micah and Kaitlyn, is quite “adult”–not in the sense that they have sex, so much as the aggression, occasional hostility, and, um, forcefulness between them. I found myself slightly uncomfortable once or twice, and unsure if Kaitlyn was in a very good relationship or not. So if you’re squeamish about that kind of thing, you may want to skip a few pages. The second is that the novel may need a slight bit more editing–there was an issue with a few homophones, like annunciating vs. enunciating, that sort of tihng, but it was mostly minor. Finally, readers that really enjoyed (and remember) the first book may find parts of the introduction to the second a bit “tell-y” (vs. “show-y”)–I’d advise you to stick it out, as once you get past chapter three, references to the first novel peter out and you get absorbed in the story. (At least, I was.)

All in all, it was an excellent adventure, with a simple, storytelling style that flowed like water air.

Overall Rating: Four Stars. Interesting ecofantasy with an epic ending. Waiting to see what comes next!

(reviewed the day of purchase)
Tanychy reviewed on July 3, 2012

NOTE! This review will contain spoilers if you haven’t read first book in series Water!

Although this book has it’s ups and downs it is really good sequel after Water. In water focus was on elements more than realtions between people. We still contionue to discover new things about elements and here the focus is on air. Just to explain, even thoug everybook in series is named after one of the elements, it doesn’t necesary mean that whole book is only focused on that element. Focus is always on all of them and balance between them. So as I was saying this book is a bit different, because here story tells about Kaitlyn’s feelings and her condition.
In Air the story continues. After saving Kaitlyn, Micah and the rest of the team is trying to firnd Shawn. They’re back home and they’re trying to do their best to find him. For Kaitlyn things are harder than usual. She’s been thriugh a lot, but also she has one more thing to carry and that is her baby. She is trying to hide it, but she can hide it for long. Soon enough Micah finds out and things have to change for her. We also meet Alex better here, btw he is really great character in this book. After a lot of things they are going to face with their biggest enemy.
What make this book really good is that you never know what’s coming next. Really a lot of things in this book I couldn’t imagine. One of them is the end. It’s completely logical and reasonable but still I didn’t see that coming. One little thing that could have been better (if you ask me) is the relationship between Kaitlyn and Micah. I miss emotions there, whereas when I read Shawn’s name I have no problem with killing him over and over again in my head.
All in all, this is still great and unusually series for me. Therefore I can’t wait to get my arc of Fire!

Again a cliffhanger. AHHHH!!! And I have to wait for the next one. Harmony has done such a great job with this new world. I can't get enough of it. The read is so engaging that it's over before you even know it. Kaitlyn's strength amazes me, she leans on Micah too much I think but as soon as he leaves she steps up. I look forward to the next book so I can find out who is the father of her baby, and see what other messes she gets into.

If you've not read Water, book 1, it's probably best that you don't read this review as it's likely to spoil the story a bit. This is certainly one series that you need to read in order.

In this book, Kaitlyn is hiding the fact that she is pregnant from everyone except Susan, Micah's sister, because being that Susan's element is water, she could tell that Kaitlyn was pregnant. In fact, Susan was the one to initially tell Kaitlyn. But in book 1, Water, Shawn had kidnapped and raped her repeatedly while holding her hostage so she's afraid that the baby may be Shawn's and not Micah's. That's one of the reasons she keeps putting off telling anyone, especially Micah. With a little help from Susan, however, the secret is revealed not only to Micah but to Shawn as well.

Now Kaitlyn not only has to deal with being pregnant but her and the rest of the Seven are trying to locate Shawn and put a stop to his plans. While trying to train for battle and study up on anything that will help her learn how to control the other elements that she's not very familiar with, Kaitlyn does something that she thinks will help her greatly, but it has some negative side effects she didn't expect.

I felt that the book started out a little slow, perhaps, but apart from that I absolutely loved the interaction between Kaitlyn and Alex, who is the only non-magical one of the bunch. I found myself laughing out loud at some of the things Alex did or said. As for Kaitlyn, there was a time or two where I felt like she needed smacked up side the head for the things that she'd do that ended up backfiring on her. After all, she's pregnant and although she cares very much about her baby, she did things that really could have been harmful.

The book certainly picked up though and was a roller coaster of a ride. It's action packed with betrayals, secrets revealed, a serious battle, humor, romance, and a pretty major cliffhanger. I very much enjoyed the story and can't wait to read the third book in the series.

NOTE: I received a copy of Air from the author in exchange for a review of book 1 in the Akasha series, Water.

You have subscribed to Smashwords Alerts new release notifications for Terra Harmony.

You have been added to Terra Harmony's favorite list.

You can also sign-up to receive email notifications whenever Terra Harmony releases a new book.