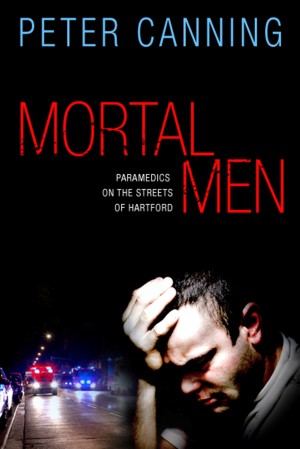 Mortal Men: Paramedics on the Streets of Hartford

Mortal Men examines the ancient bonding between friends and partners who count on each other to make it safely home. Written by veteran paramedic Peter Canning, author of the acclaimed Paramedic: On the Front Lines of Medicine and Rescue 471: A Paramedic’s Stories, Mortal Men provides a rare view into the real-life world of street medicine and into the lives of the men and women who fight its battles.

Peter Canning has been a full-time paramedic in the Greater Hartford area since January of 1995. His first book Paramedic: On the Front Lines of Medicine details his journey from speechwriter for the Governor of Connecticut to caregiver on the city streets. Rescue 471: A Paramedic's Stories is the sequel.

Since 2006, he has been the author of the influential EMS blog: Street Watch: Notes of a Paramedic. 2012 marks the publication of his long awaited novel, Mortal Men: Paramedics on the Streets of Hartford.

A graduate of the Iowa Writer's Workshop, Canning attended the Phillips Exeter Academy and the University of Virgina. He has worked many jobs in his life: tennis instructor, aide to United States Senator, taxi driver, meatpacker, line cook, telephone solicitor, book and movie reviewer, factory worker, health department administrator, speechwriter and political campaign director before finding his place in life as a paramedic. In addition to being a field paramedic, he is the EMS Coordinator at John Dempsey Hospital.

Peter Canning has been a full time paramedic in the Greater Hartford area for twenty years. His first two books, Paramedic: On the Front Lines of Medicine and Rescue 471: A Paramedic’s Stories were published by Ballantine.

A lifelong fan of the Boston Red Sox, he lives in West Hartford, Connecticut.

You have subscribed to alerts for Peter Canning.

You have been added to Peter Canning's favorite list.

You can also sign-up to receive email notifications whenever Peter Canning releases a new book.