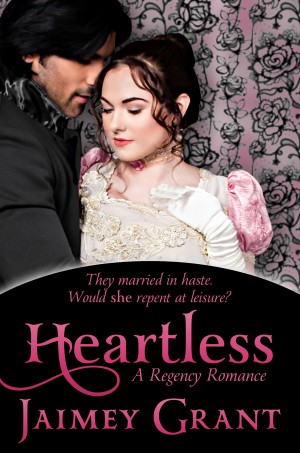 By Jaimey Grant
Rated 4.33/5 based on 3 reviews
England 1820.
The Duke of Derringer must marry within one week. Disgusted with his father for such a stupid codicil, he vows to marry the first woman he meets. That woman is Leandra Harcourt, illegitimate daughter of the late Earl of Harwood. Derringer marries her, refusing to admit he's helping her more than himself. Meanwhile, some disobliging soul wants him dead. More
A dark stranger....
Finding herself abandoned after the death of her father, Leandra Harcourt takes the greatest risk of her life. She accepts the marriage proposal of a complete stranger, the Duke of Derringer—a man the world calls Lord Heartless.

A heartless proposal....
A desperate girl with no prospects seems the perfect solution to Derringer's most recent problem: marry before his 30th birthday to gain his rightful inheritance, though marriage is the last thing he needs. The need to find his missing cousin takes priority over any silly marriage and he quickly abandons his new bride in the wreck of his family estate.

Reviews of Heartless by Jaimey Grant

Leandra Harcourt marries a tall dark stranger because she has been abandoned by her step family after her father passes away. She has no where to go. Her husband is mysterious and sexy but doesn't take the marriage vows very serious when he leaves her to attend to business after only being married 2 days.
The Duke of Derringer, or as some call him Heartless married Leandra because she is the first woman he meets after he finds out he needs to marry to save his inheritance. Leandra Harcourt is nothing like his other mistresses, she is plan with glasses. He's intrigued as he learns he married someone he can't just bully around. She learns there is much more to the man than just being cruel.
This is a wonderful love story, but not only do you get romanced by a Duke, many questions arise. First, what really happened in the death of the Duke's mom and why has it made him so heartless. Now that the Duke inherited his money, who is out to kill him? Will they stop at the Duke? Or by marrying Leandra has he put her life in jeopardy? In the end, things turn deadly. You are holding your breath wondering how it will all turn out. It's a great story of romance and mystery.

(reviewed the day of purchase)
Maria Savva reviewed on June 29, 2010

3.5 stars.
This book starts out very well. Up to about page 100 I thought it would be one of my best reads ever, and that is saying something because I read a lot. It is an entertaining book, but there are far too many secondary characters, many of whom are not even introduced as far as I could tell. New names crop up here and there; by the time I was three quarters of the way through I gave up caring who they were really and just carried on reading.
I liked the two main characters, The Duke of Derringer, and Leandra, for the most part. The only issue I had was that at times they both seem to be bipolar! Their behaviour is very inconsistent. This may be intentional, because The Duke had suffered a childhood trauma which could have left him unstable, and the circumstances surrounding Leandra's birth meant that she was always seen as an outsider in her family. However, I feel that the writer could have spent more time on character development of the main characters, rather than spending too much time on insignificant characters.
Jaimey Grant obviously has a talent for writing a gripping story and keeping the reader engaged, because the first half of the book is amazing. The second half needed work to make it believable. There were times I was left questioning how certain things had taken place e.g. how did the Captain of the Ship where Derringer was being held captive manage to send missives out to Leandra? How would they have got to her? This was not explained at all.
The book didn't really flow well in regard to continuation of certain threads in the book, for example, the letter that was found hidden in Derringer's mother's old notebook. I know the intention was that the reader should not find out this information until the end of the book, but the way in which it was written was a little annoying. As a reader I didn't like being kept dangling for too many chapters.
The ending was nice, but the run up to the ending was a bit rushed I think.
On the whole a good plot, nicely written, but I would personally have liked to see more of the main characters.
A note to the author: Sometimes what doesn't work too well as a novel would work beautifully as a film or a play. In this case, I could really see this book as a very powerful film, or maybe a play in the theatre. I would definitely go and see it!

I read this book online for PIF, and I have to give Jaimey Grant credit: she knows how to keep a reader's attention. The characters were believable and well-drawn. And from the very beginning, the book pulled me in. I did feel that the story got off track in a few places, where details seemed to be there that weren't directly relevant and too much time was spent on secondary characters, but all in all, I enjoyed the read. Romance isn't ordinarily my thing, but Heartless kept my attention (which is especially tough to do on the computer screen--where my email, and various social networking sites summon). I have to give the author her kudos for that.