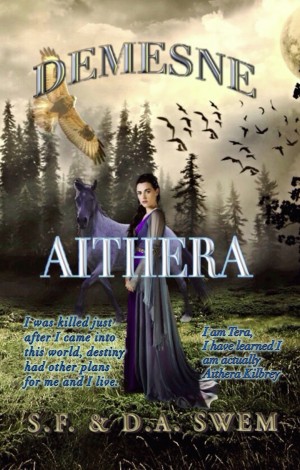 Steven and Detra are a team, and were destined to meet. Both were born in South Dakota. Both went into the Air Force. Steve was in Germany, Detra was assigned to go to the same base. Steve went to California, Detra’s assignment was changed to California, where they met, and have been together ever since. They worked together, played together, and now write together. They reside in the Pacific Northwest, in the Puget Sound area. Quite a change from all the desert area’s they have been in.

Demesne Aithera
Book Trailer - Assassinated at birth, but destiny has plans for her. With the essence of two others, She lives.

I simply cannot tolerate the use of only the present tense. This may be a great tale in the making, but I simply feel ill after the prologue. Please apply correct usage and try again.

I really enjoyed the first book in the series and will definitely read the next one. The first person POV took a little getting used to but didn't effect my overall enjoyment of the book.

Fun and full of potential!! The first book in the series really sets up the tone of the novels. It was great, but not without flaws. The first issue I held with the novel was verb tense. When a story is usually told, it is told from the narrative perspective which is in past tense. The fact that the book is written in present tense was something that was a struggle for me to get past. Another issue with the novel was that it didn't go in depth emotionally with the character. A female character is usually an emotional rollercoaster. This young girl was thrown in some emotional distressing situation and I barely felt that. She shed tears, but nothing impacted me emotionally the way novels with a female protagonist usually do. I was like was watching everything from a distance and I felt no sympathy or joy throughout the novel, even when some characters were affected negatively. While I may have some negative things about this novel, I would not dismiss it. It was fun ride, but I wish it had more an emotional emphasis.

You have subscribed to alerts for S.F. Swem.

You have been added to S.F. Swem's favorite list.

You can also sign-up to receive email notifications whenever S.F. Swem releases a new book.