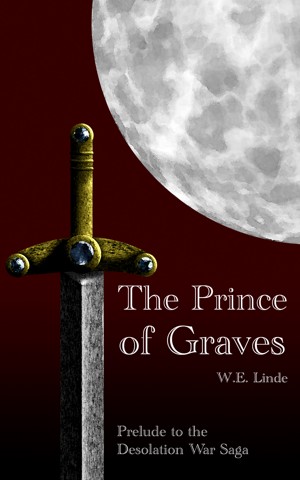 The Prince of Graves

By W.E. Linde
The Prince of Graves tells of the end of the sixth war between the Necromancer Kingdoms and the remnant people of Maladine. Four princes lead armies against the climactic invasion of the Dagir Xethu, the armies of the Necromancer Kings. As steel and magic falters in the face of the armies of death, whispers rise that now is the time of the Prince of Graves and the end of the days of mortals. More
It has been a millennium of war. Since the collapse of the majestic realm of Maladine one thousand years ago, the wicked Necromancer Kings have sought to destroy the Remnant Kingdoms and enslave their descendants. One by one, the nations that emerged following the sundering of Maladine fell under the shadow of the Lords of the Dead, until only Valeot the Great remained.

Four princes now lead their armies against the climactic invasion of the Dagir Xethu, the armies of the Necromancer Kingdoms. As steel and magic falters in the face of the armies of death, whispers rise that now is the time of the Prince of Graves and the end of the days of mortal kingdoms.

I've been working on the world of Maladine in some form or fashion for decades. Unfortunately for me, the path to that world was blocked by my own insecurities. Well, that and the real world. I served for nearly twelve years in the U.S. Air Force, and that lifestyle didn't particularly lend itself to developing creative writing skills.

Shortly after separating from the military in 2007, I decided that the time was right. I sequestered myself in my apartment, and wrote my first complete manuscript. This book, an as yet unpublished novel called Chasing After Vanity, was a pleasure to write. The only thing is, it wasn't fantasy. And ever since I first felt the stirrings to be a writer, fantasy is what I wanted to do.

With one complete manuscript under my belt, I dove into my decades-long dream of Maladine the Great, the once mighty kingdom that collapsed under the weight of her own iniquities. The first novel was to be Shadows and Bones, the first in a series of books that detailed the climax of a millennium-long struggle between good and evil. Yet as I wrote Shadows, I constantly found it necessary to develop some recent history. After all, the novel starts in the aftermath of the most recent war with the Necromancer Kings. So as I pieced together this history, I was struck with the notion to develop this into its own complete narrative. Longer than a short story, but shorter than a novel, The Prince of Graves emerged. It was both more difficult to write, and more enjoyable, than I expected. I hope that you enjoy reading it as much as I did writing it.

You have subscribed to alerts for W.E. Linde.

You have been added to W.E. Linde's favorite list.

You can also sign-up to receive email notifications whenever W.E. Linde releases a new book.