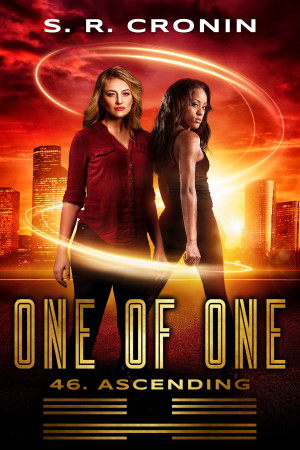 By S. R. Cronin
Rated 4.33/5 based on 9 reviews
A Nigerian beauty searching for her captive sister seeks a fellow psychic to help her. What she finds is a cranky Texan who denies her own talents. An ancient group of telepaths known as x0 wants to ignore both women, but how can they? The sister's captors are turning more dangerous, and common links are forging these two radically different women together in ways that even x0 barely understands. More
Somadina is a young Nigerian beauty who thinks her telepathic abilities are perfectly normal. So when her sister becomes a captive, the young Igbo woman draws upon her powers to find an ally. What she finds is Lola, a cranky Texan geophysicist who does not believe in nonsense and insists on ignoring the disturbing phenomenon in her mind. However, these two women have more in common than they realize, and they are about to learn how well that will forge a powerful link.

As Somadina discovers that her sister has become a strategic pawn in a dangerous game, she vows to do anything to get the attention of this kindred, uncooperative lady. This forces x0, an ancient organization with good reasons to stay hidden, to reluctantly emerge from the shadows. Somebody really needs to intervene. Both women are far stronger than they know, and to make matters worse, a fringe fanatic may be on the verge of altering a nation’s future.

One of One is part of 46. Ascending, a collection of loosely interrelated novels about five family members who each discover they can do the extraordinary when they must. The books are designed to be read as stand-alone stories or in any order as they overlap in time and build upon each other in all directions.

Hi. I’m Sherrie Cronin, the author of a collection of six speculative fiction novels known as 46. Ascending. I’m now in the process of publishing a historical fantasy series called The War Stories of the Seven Troublesome Sisters. A quick look at the synopses of my books makes it obvious I’m fascinated by people achieving the astonishing by developing abilities they barely knew they had.

I’ve made a lot of stops along the way to writing these novels. I’ve lived in seven cities, visited forty-six countries, and worked as a waitress, technical writer, and geophysicist. Now I answer a hot-line. Along the way, I’ve lost several cats but acquired a husband who still loves me and three kids who’ve grown up just fine, both despite how odd I am.

All my life I’ve wanted to either tell these kinds of stories or be Chief Science Officer on the Starship Enterprise. These days I live and write in the mountains of Western North Carolina, where I admit I occasionally check my phone for a message from Captain Picard, just in case.

Learn about the new series at https://troublesome7sisters.xyz/.

Somadina and Lola are two totally different people, on different continents, worlds apart but find themselves linked by telepathic abilities. They hear each other, hears each other emotions but do not know of each other until many years later; Somadina to earn money and Lola because it is kind of driving her crazy.

Somadina has made her little sister, Nwanyi, her priority when their mother died during child birth. She knows that Nwanyi won't get the love and attention she will need from their father. Their mother was his only love. Since she was now dead because of yet another daughter, he is forced to marry again to give him and his father another "heir".

When he finally tires of being tormented by his dead love, he decides to do "right" by the youngest daughter and marry her off, but not to the man that he thought he had.

Somadina eventually fears for her sisters life after not being able to tap into her sisters thoughts as she use to as a child, after Nwanyi's calls home stopped abruptly. Using their [newly honed] abilities, Lola, along with a group of other telepaths, assist Somadina in her search for her sister Nwayni.

I found the story intriguing, it kept me reading. As I am not a lover of READING sci-fi, I skimmed a lot of the educational parts.

I was given this book in exchange for an honest review.

If you like fantasy with a little dose of reality this is the book for you. It contains factual information on Nigerian heritage. I loved the interactive style this book is written in. When speaking of a song the author would give a link to the song. I can not wait to read more from this author.

This is an interesting novel using telepathy as its focus. The Nigerian element was different and the plot unique. The e-pub formatting did not leave spaces to differentiate changes in location and POV so it was hard to follow at times.
I found that incorporating a play list into the text was contrived and didn't add anything. I didn't try the other links to background.

What an intense book! It was so captivating that I stayed up till 4 a.m. to finish it.

I think that including the links was a great idea. I like doing a bit of research if a subject/place/person/etc. mentioned in a book interests me, so the included links saved me quite some time. Unfortunately some of the links are no longer valid - I will tell you which in an email, as requested, so you can put other links in instead.
Most of the youtube videos aren't working in Germany, though some do work with the Firefox addon ProxTube.

I'm looking forward to buy and read the sequel.

This is a book I'll never forget. It educated me at the same time that it moved me deeply. I had no idea that there have been THREE oil spills in Nigeria larger than the Valdez! Oil companies have ravished the Nigerian ecology, and this learning helped me to understand the cruelty and craziness of one of the characters. In fact, Cronin's expansive international plotline is full of fascinating characters and learning about telepathy and reincarnation as well as the oil industry, which makes for a bit of crazy-making emotionally (as one character is methodically tortured), but I skipped ahead to assuage my panic and was satisfied that the author was skilled enough to carry me through this crisis to a relatively happy ending. The telepathy and the international organization Xo that exists to help telepaths is so realistic that I googled Xo just to see if I could join. (XO is also a grade of Cognac!) I bought the sequel Y1 and am happy to be in the presence of this fascinating family again. P.S. I read it on my Kindle and wasn't bothered by or interested in any of the links. The text completely stands alone without them.

This book is really creative and unusual. That up front. I'm interested in seeing the sequel, which is always high praise. The voice is good, the characters are interesting, and so is the plot. There are a couple of experiments that the book makes and I'm still trying to decide if they work, which probably means they do. I'll get to that in a moment.

In synopsis, this is about two women living on opposite sides of the world, geographically and culturally, who are bound together by a telepathic tie even though they are total strangers. The main plot line involves a nefarious political scheme, with the sister of one of the two women as its intended victim. It's a good story, and the way the telepathy contributes to the story development held my interest.

A word about the experiments. There are two of them. One is that the point of view shifts often and abruptly, creating the sense of identify being a fluid and shifting thing, and the isolation of the individual being an illusion. That violates a basic convention of fiction writing which holds that point-of-view changes should be done not too often and clearly delineated by (for example) chapter headings (although other ways of making the shift clear and unconfusing can work, too). I found that jarring to begin with, and you may, too, but my suggestion is to get past it and get used to it -- I think it works. The defiance of the convention is deliberate here, I understand why it was done, and the story still flows well.

The other experiment is to embed links in the story to music, articles, and so on where these occur in the story. That I don't think works as well, but it's by no means a killer. If you click on those links, you'll disrupt the flow of the tale badly and lose immersion, but I didn't find it hard to ignore them, and of course they're still there if I want to go back and check it out.

I did feel that the pace of the story could have been a bit faster and livelier. Some of the passages of description and technical detail could have been shortened, the necessary information conveyed more economically, and the story would have been more gripping; as it was, some of the plot's potential (and it has a lot) was lost, I felt.

Still, good story, and a worthy read. Oh, and also: if you, yourself, are a telepath, you'll especially love this. I won't explain that. You'll understand if it applies.

A gripping tale of despair, hope and an unlikely friendship that is forged through transmitted thoughts sent thousands of miles away and bound though faith. It mixes real life facts with fictional characters bringing them to life. A most enjoyable read. You won't want to put it down.

This book is a marvelous mixture of real life and fantasy for adults. The 'magical realism' approach is intriguing. I highly recommend it.

Great book club book. Just reviewed it with my book club and everyone gave it a big thumbs up!

You have subscribed to alerts for S. R. Cronin.

You have been added to S. R. Cronin's favorite list.

You can also sign-up to receive email notifications whenever S. R. Cronin releases a new book.