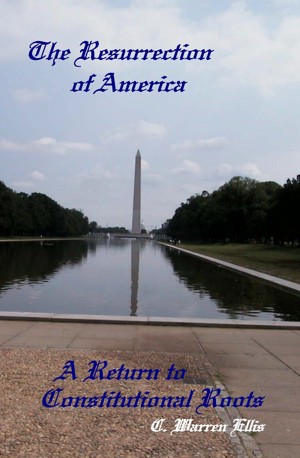 The Resurrection of America

By C. Warren Ellis
The Resurrection of America brings to the attention of Americans the many dangers facing our country from within. This book looks at the issues that exist today as a result of an out-of-control government, and it offers some proposed solutions. The author suggests changes at all levels of government and commerce based on our constitutional rights.

C. Warren Ellis was born in rural Pennsylvania, second youngest of a family of seven children. Born just about 9 months after Pearl Harbor, he watched the military might gearing up to fight WWII, remembering as a child the many military aircraft transiting the skies of his rural Pennsylvania home.

Joining the US Air Force in 1960 at the age of 17, he watched the Cuban Missile Crisis unfold from Eglin AFB, just 90 mile from Cuba. B52 aircraft from his squadron kept him and many others on alert and working 12 hour shifts for a long time. Honorably discharged from the Air Force after 4 years service and before his 21st birthday, he held several jobs before returning to technical school to further his education in electronics. After tech school, Mr. Ellis was employed by a number of firms whose names are household words.

His employers read like a who’s who in the business world. His longest employment was 23 years with IBM, but also worked for such companies as Bendix, Link Aviation, Charmin Paper, Osram Sylvania, Litton Industries, and Northrop Grumman. With over 50 years of both blue and white-collar employment, he has observed first hand the effects of government on tax burdens, the economy, and unemployment, and especially the downsizing of many companies during the late 1980’s and early 1990’s.

Mr. Ellis’ love of history led him to biographies of the great statesmen and Presidents, and ultimately to the study of not only the Constitution of the United States and the Bill of Rights, but the literature and writings of the time in which the Constitution was formed and ratified.

You have subscribed to alerts for C. Warren Ellis.

You have been added to C. Warren Ellis's favorite list.

You can also sign-up to receive email notifications whenever C. Warren Ellis releases a new book.