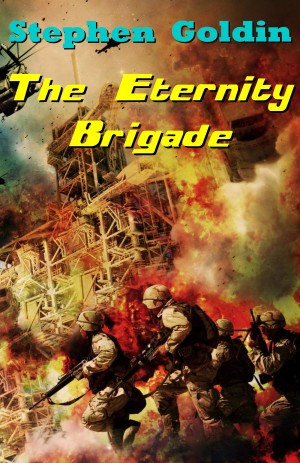 From incarnation through incarnation, one goal remained in Hawker's mind. Somewhere, somehow, there had to be a way out of the loop. And he was determined to find it.

This is a modern revision of a classic science fiction novel.

I originally read this book back when I was in high school, not so long after the Vietnam war that people still questioned why wars were even being fought. Even back then this story stuck with me, and was my first real introduction to the sub-genre of military science fiction. What happens when killing doesn't matter, death doesn't matter, all that matters is to complete the mission, with no understanding of WHY you are fighting the war or killing the guy in the blue armband, only to be put to sleep when it's all said and done and woken up when the next war rolls around to kill again.

Now, upon re-reading the updated edition in 2014, it strikes me how well this book brings you into the psyche of a 'career soldier' caught in this hellish merry-go-round as he is resurrected to fight in wars again and again. It was disturbing when I read this story back in the early 1980's, and it's even MORE disturbing now as we are not yet extricated from Afghanistan (which at least STARTED with a purpose) and Iraq (which is like ... WTF???) and already there are hawkish clamorings to 'help' Ukraine or 'help' Syria. War is dehumanizing, and while some wars can't be avoided, this book highlights that soldiers are not some fungible commodity to be shuffled form war to war.

I haven't read the original version, but whatever revisions were made for the 2010 version made it feel like a contemporary novel to me.

The SF concepts are excellent, and the main character is done very well. I didn't fell that was a lack in the other characters, although I agree that they aren't as detailed or nuanced as the main character. One doesn't really expect that in a good SF book, as the ideas and the setting are in more important in SF than in most genres.

Highly recommended if you like SF and especially Mil SF.

(reviewed 3 years after purchase)
Caroline Cryonic reviewed on May 15, 2011

The Eternity Brigade was first published in 1980. Major revisions have been made and the final edition was published in 2010. I’ve never read any earlier editions so I’m approaching this work as an entirely new 2010 release.

The concept of using cryogenics to make soldiers nearly immortal is intriguing. The story is told from the point of view of Hawker, an American soldier who is trapped in the army’s resurrection technology, as he is forced to become a pawn in increasingly bizarre wars that he has no connection to. In short, Hawker is stuck in a nightmare. Through the centuries, he becomes even more alienated from society to the point that all of future civilization is incomprehensible to him. It’s a haunting future to imagine and it really takes man’s inhumanity to man to the next level.

On top of the amazing concept, it’s fast-paced. It grabbed me very quickly and never let go of my interest. The narrative doesn’t mess around with the details and moves the plot smoothly through the centuries and galaxies.

Although the reader doesn’t learn much about Hawker, he’s still a very sympathetic character. It’s easy to see how anyone could be in Hawker’s position, where control of one’s life can be swept way by forces like larger personalities, groupthink, and the industrial-military complex. It makes Hawker’s experiences even more frightening.

While those elements are exceptionally strong, I found the other characters and the world-building lacking. The characters feel like types rather than real individuals, and a few of them had unclear motivations. I couldn’t pin down Hawker’s original time. He makes some references to iPods which would set his time in 2001 and later. His fellow revived men find it surprising that China isn’t completely communist anymore, but China was already economically liberal enough to join the WTO in 2001.

The Eternity Brigade moves through centuries with the changing forms of warfare and civilization. I appreciate the time-place disorientation that Hawker experiences with each incarnation, and the idea that future society can only become more strange and incomprehensible. But the future setting alongside the sombre tone often feels anachronistic. The future societies are reminiscent of the “exotic” alien societies that Captain Kirk from the original Star Trek interacted with. The aliens have easily identifiable binary genders and the humans live in bubble-domes. I just feel the tropes used for the setting are a bit quaint. The details that I found unconvincing are found in less than a tenth of the text, but they are distributed throughout the book so they occasionally distracted me from the main storyline.

The Eternity Brigade is a thrilling read with a great central concept. I enjoyed it, but I can’t say it’s my best read of the year. I still guarantee that this book is a provocative page-turner that’s easily devoured in one sitting. It’s worth reading to explore its engaging ideas about the human cost of war and its vision of dystopia, but don’t expect too much from the characters or the world-building.

Note: a free review copy was provided by the author.