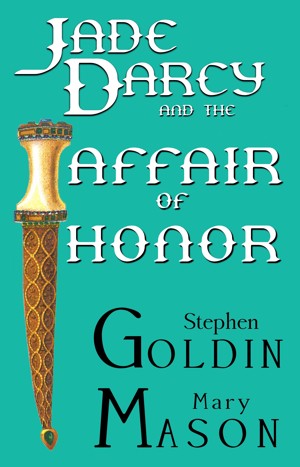 Jade Darcy and the Affair of Honor

By Stephen Goldin
& Mary Mason
Rated 5.00/5 based on 1 review
Jade Darcy, a computer-augmented mercenary, turns down what she considers a suicide assignment: traveling to an enslaved world to assassinate one of its military leaders. But then she learns there's someone looking for her--someone with the potential to expose her mysterious past, with possibly fatal results. All of a sudden, a suicide mission looks positively appetizing.... More
For the past five years, Jade Darcy has not seen another human being. A computer-augmented mercenary, she lives on the planet Cablans, a stopover point for traders from hundreds of worlds -- and a good place to meet customers who need the services of a skilled warrior.

She turns down what she considers a suicide assignment: traveling to an enslaved world to assassinate one of its military leaders. But then she learns there's another human being on Cablans -- a human being with the potential to expose Jade's mysterious past, with possibly fatal results.

All of a sudden, a suicide mission looks positively appetizing....

This is the first published volume in the Rehumanization of Jade Darcy series.

"A legend returns. Long before there were any buffed Xenas or xenophobic Buffies in the pantheon of fighting females, there existed a remarkable woman warrior named Jade Darcy: a computer-assisted mercenary so formidable and so smart that the Dark Angel, Friday and the Bionic Woman together would have hesitated to piss her off--yet so emotionally mixed up that she broke your heart. Even better: unlike any of those ladies just named, this jade's adventures were most definitely not rated PG. Indeed it was her creators' deep insight into female sexuality and spirituality, as much as their mastery of action scenes, that gave Jade Darcy an uncommon plausibility, a realness, so often missing in other woman-warrior fictions. The restoration to print of the two volumes of the Rehumanization of Jade Darcy series is long overdue, and most welcome; you'll have to go a long way to find a more addictive heroine.
Available ebook formats: epub mobi pdf lrf pdb txt html
First 25% Sample: epub mobi (Kindle) lrf more Online Reader
pdb
Price: $4.99 USD
Buy Add to Library Give as a Gift
How gifting works
Create Widget
Tags: military computer augmentation cyborg mercenary female protagonist bouncer female executive
About Stephen Goldin

Also in Series: The Rehumanization of Jade Darcy

It has been awhile since I have read a book I enjoyed as much as Jade Darcy and the Affair of Honor. It is complex and intricately developed. The action is driven by the characters in the story and by Jade Darcy in particular.

The slate of foreign characters is amazing. The story is set on a planet on the edges of developed society. It is comprised of many different species, some of whom are humanoid and others who are insectoid and still others who inhabit more or less dimensions than our simple three dimensions. The characters are rich, interesting, and the different problems that can occur when such varied life forms, with all their intricacies, interact causes situations that range from the comic to the life threatening.

Jade Darcy herself is an enigma. Early in the story we are led to believe Jade Darcy might not be her real name, but other than a clue to part of it at the end of the book we aren’t let in on that particular secret. What we do know is that Jade has had a specialized operation to computer augment her reflexes. She is a carc, a computer-augmented reflex commando, and her existence outside of the military world makes her a rarity. She hides the fact she is a carc for reasons that aren’t clear. It is implied that she may be wanted. She takes what is certain to be a suicide mission rather than face another human being – the first to come to the planet of Cablans where Jade lives in the seven years she has been there. It is apparent she has run from human contact before.

The story and the action in it are wonderful. The science fiction in it feels realistic; it isn’t simply another Earth-like setting with futuristic sounding problems, but a setting on an outpost planet favorable to life that teems with diversity that becomes a driving force for part of the story. The matter of honor the story addresses exists on several different levels and becomes the driving force for the evolution of the main character. And the Greest, why he/she or it will just have you wondering how many dimensions it is possible for a being to exist in and what creatures from all those different dimensions might be like. I know I personally will be puzzling over the Greest and hiss/hers/its manipulativeness for some time.

If you are a fan of science fiction, or even just futuristic literature that doesn’t simply result in some apocalyptic version of our demise, then you should read this story. I think you will find it believable on all the levels that count and thoroughly enjoyable. I know I did.