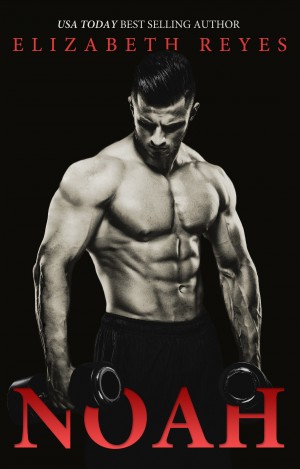 Rated 4.00/5 based on 5 reviews
From the author of The Moreno Brothers meet, Noah. The first in the 5th Street series. For information on Elizabeth Reyes and her other work visit www.ElizabethReyes.com More
Veronica Cruz has been through hell and back. After disconnecting with the world two years ago to be at the side of her dying mother, she’s left alone, unemployed, overweight, and feeling a decade older than her twenty-eight years. When her best friend coaxes her into joining the local gym to ditch her depression and rejuvenate her life, she meets Noah. Assigned to help Veronica lose weight, Noah is everything she expected a young trainer to be—perfectly chiseled, supportive and motivating. Add to that, he’s incredibly sexy. He’s everything she’s ever looked for in a man. What she least expected was for him to fall for her, but he has. There's just one glaring problem: Noah is eight years younger.

Noah Quintanilla has his eye on a boxing title—someday. Down for a few months with an injury, his maintenance-boy pay at 5th Street Gym won't cut it. He’s finally given the opportunity to train. The catch? His trainee is an out-of-shape woman with a free week pass. Taking on the challenge, Noah stumbles into one of the closest friendships he’s ever known, and before he knows it, he’s in love. But Veronica’s not having it—the age difference is too much. Their platonic relationship means having to watch her date other men—something that would make him crazy. Believing he's the man for her, Noah sets out to prove that age is but an illusion, and there's more to him than just a number.

I write because I must. It's not a choice or a pastime, it's an unyielding calling and my passion."

USA Today Bestselling Author, Elizabeth Reyes continues to answer to her calling on a daily basis. Since releasing her debut novel Forever Mine (Moreno Brothers #1) in 2010 she has now published 28 novels total and fast at work on the next. The excitement her Moreno Brothers, 5th Street, and Fate series have garnered have far exceeded her wildest dreams. It is with as much excitement that she'll continue to put out books related to these series as well as introduce brand new ones very soon.

Keep up with all her upcoming books/events/signings by visiting her website.
www.ElizabethReyes.com

Also come join the fun by visiting and liking her fan page on Facebook https://www.facebook.com/pages/Elizabeth-Reyes/278724885527554

Definitely chick lit, so I found the cover misleading. If this were categorized as erotica I'd give it a 2 for the unpersuasive sex, but it's not, and the story does move along. I'd give it a 5 for its genre if the writing were a tad less trite. Four it is.

The romance took its time but a bit too long ,a few of the misunderstandings were repetitive and could be done without .But the characters especially Roni and Nellie were good .

I LOVE this book so much!
Never mind about the age gap. As long as they both are adult, it's okay.

I love Noah for liking Veronica even when she was still fat and messy and their relationship developed slowly but sure in such a cute way.

I really enjoyed reading this. Such a perfect romance read!

This new series by Elizabeth takes place in Los Angeles. The 5th Street gym is where we find Noah, Gio, Abel and Hector. The guys are all training as boxers and they are all big handsome hunks! The Moreno Brother's Series was so good and the characters seemed so real I didn't know if a new series could compare. I was pleasantly surprised and can't wait until the next books are released. Once again she has created characters that you can laugh and cry with. Get mad at for their secrets or dumb decisions. And be happy for when they finally get it together.

Noah has been working at the 5th Street Gym for years and is wanting to become a trainer. Jack, the owner of the gym, finally gives him that opportunity the day that Veronica and Nellie walk in the gym with their coupons for a free week. They look out of place but Noah decides to prove himself to Jack and whip these gals into shape. A decision that changes Noah's life.

Veronica has let herself go since her mother's death. She has put on too much weight and barely leaves the house. When Nellie drags her to what looks like a all male gym, she wants to run back home and hide. When their handsome and young trainer greets them the last thing she wants to do is get on a scale or work out, but for Nellie's sake she does. Noah is not only a great trainer but he soon becomes a good friend and roommate to Roni.

It's a long and bumpy road for these two as their friendship grows into more. Their pasts come between them and there is an age difference that Roni struggles with. Noah has a bigger fight on his hands then what he faces in the ring when he sets out to win this prize.
**Sexual situations and language

Cute and I liked the way they progress in their realtionship

You have subscribed to alerts for Elizabeth Reyes.

You have been added to Elizabeth Reyes's favorite list.

You can also sign-up to receive email notifications whenever Elizabeth Reyes releases a new book.