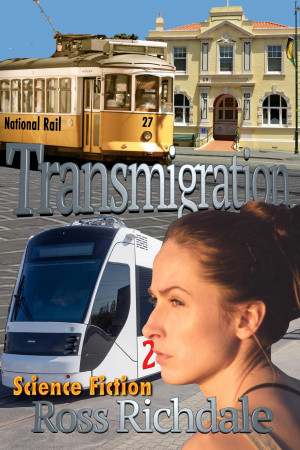 By Ross Richdale
Four humans find themselves in a village without knowledge of where they come from or who they are. Memories of a war and a different life flash into their minds that are unrelated to their lives ... that is until they meet a farmer who isn't even human.

A bombed out city is on the other side of the hills is reached though a railway tunnel. However, the city was destroyed a millennium before. More
Transmigration: (of the soul) pass into a different body- Concise Oxford Dictionary.

Four humans find themselves in a small village of Betaham without knowledge of where they come from or who they are. It is a pleasant little town but disturbing memories of a brutal war and a different life flash spasmodically into their minds.

Their dreams seem so real but are quite unrelated to their present lives ... that is until they meet a strange farmer and a violent sandstorm arrives at Betaham. They find the farmer isn't even human. Furthermore, they may not even be human themselves.

A bombed out city is on the other side of the hills and can be reached though a railway tunnel. The trouble is that the city was destroyed a millennium before and is an archeological site visited by the farmer's race who arrived from another planet.

Only then do the four learn the truth about themselves...

Price: $2.99
$1.20 USD
Buy with coupon Use the code AGB60 at checkout for 60% off during our site-wide promotion!
(Offer good through May 31, 2020 )
Have a better coupon?
Add to cart, then apply your coupon
Add to Library Give as a Gift
How gifting works
Create Widget
Tags: science fiction ross richdale another planet
About Ross Richdale