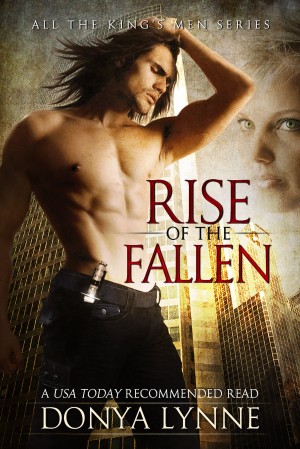 Rise of the Fallen

Rated 3.50/5 based on 2 reviews
Vampire enforcer Micah Black falls into despair after losing his mate, only to bond to spunky blonde Sam Garret when she saves his life from an enemy who will stop at nothing to kill them both. More
In the streets of Chicago exists an uneasy, centuries-old truce between vampires and their distant cousins, a race of shifters called drecks. Vampire enforcement agency, All the King’s Men (AKM), is charged with maintaining the truce, but when volatile enforcer Micah Black loses his mate and falls into the biological agony that results from the broken bond, he tests the boundaries of the truce by seeking out Apostle, a leader in the dreck community. Micah wants Apostle to kill him, a request Apostle is more than happy to fulfill.

Donya Lynne is the bestselling author of the award winning All the King's Men and Strong Karma Series and a member of Romance Writers of America. Making her home in a wooded suburb north of Indianapolis with her husband, Donya has lived in Indiana most of her life and knew at a young age she was destined to be a writer. She started writing poetry in grade school and won her first short story contest in fourth grade. In junior high, she began writing romantic stories for her friends, and by her sophomore year, she’d been dubbed Most Likely to Become a Romance Novelist. In 2012, she fulfilled her dream by publishing her first two novels and a novella. Her work has earned her two IPPYs, five eLit Awards, a USA Today Recommended Read, and numerous accolades, including two Smashwords bestsellers. When she’s not writing, she can be found cheering on the Indianapolis Colts or doing her cats’ bidding.

About the Series: All the King's Men 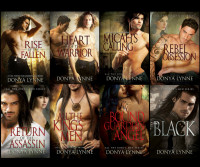 Vampires and shifters battle on the streets of Chicago while the vampire enforcers of All the King's Men wrestle with their own pasts and lost love as they find new mates.

Also in Series: All the King's Men

Reviews of Rise of the Fallen by Donya Lynne

So, this story doesn't only cover Micah and Sam's stories, but a host of other folks. Some you like. Some you don't. Some you just don't care.

And there's all kinds of sex. Straight sex. Gay sex. Kinky sex. If this isn't your cup of tea, um, don't pick up this book. I personally found it interesting to read some of this stuff, never having been exposed to it before.

As for Micah, here's my problem. The guy's a dick. And you can't even blame the broken bond for his dick-i-ness. He was always a dick. Everyone knows he's a dick. Very few like him despite it. Most fear him or don't care. Some liked to see him broken. You can't like or emphasize with a dick. At least, I couldn't. And while I felt for his loss, I didn't care because, ya know, he's a dick!

But he is So. Good. Looking. Almost makes me want to try to save the dick myself. Ya know what I mean?

I have to admit, I liked him more towards the end, especially his treatment of Sam... but the dude's gotta shed that dick bag he carries around and be more like-able.

Loved Sam. Loved her strength and grit and determination. Hated her douche of an ex-husband. He deserved everything he got! It was quite comical, actually.

As for plot? It was ok, though there were some unanswered questions. There's a whole story line about a guardian that who or why or what he was all about is unexplained. At least, if it was explained I didn't get it. While I liked the guardian character quite a bit--one of my favorites, in fact--I didn't get what his purpose was.

So let's get to the meat and potatoes...the sex. The descriptions were good, if lacking a little viscerally. I thought adding the sound affects (like "Ungggh"), was kind of a turn off. Better to describe the actions and reactions viscerally than to put sound affects like that in dialogue. To me, it was off-putting and distracting.

You can read my review of this book here:

You have subscribed to alerts for Donya Lynne.

You have been added to Donya Lynne's favorite list.

You can also sign-up to receive email notifications whenever Donya Lynne releases a new book.