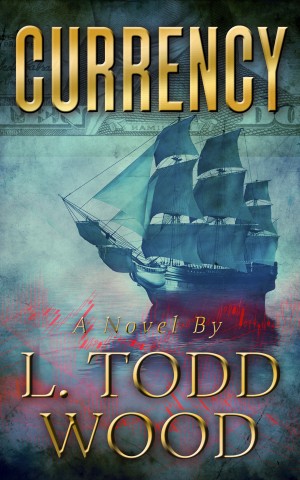 By L. Todd Wood
Rated 5.00/5 based on 4 reviews
It is said that if you don’t know history, you are doomed to repeat it. Currency, combines multiple historical strands that converge on the number one issue of our time, the geographic location of economic and military power in the 21st century. Economic Thriller! An incredible story of power, romance, revenge and international finance spanning three centuries. The book could not be more timely! More
"Currency combines history, finance, romance and action into a timely and entertaining read on a subject that has serious economic and national security implications. My wife and I both enjoyed reading it."

In Currency, Wood has pulled off a first novel that captures the reader with a page-turning adventure, while it addresses head-on the most pressing and intense global economic, military and political issues of our very challenging current times.

Wood's real world experience on both Wall Street and at the center of the US Military Special Operations world, combine with his love of history and command of current global issues, to create a story that is as intense and gripping as it is timely.

Currency weaves the historical adventures of our US Founding Fathers who built the country's early economic structure, with current day hero Connor Murray. Connor unexpectedly finds himself thrust into a world shaped as much by greed, betrayal and violence as it by heroism, loyalty, love and the quest for personal peace.

Fate forces Murray to navigate events that play out on the world stage. The United States' current economic weakness collides with its international rival's very real drive for economic, political and military influence. This collision produces an intense drama and adventure that is as scary as it is possible amidst the world's current state of affairs and balance of power.

If you love a good adventure story on both the personal and international level - Currency is a must read. If you're concerned about how the United State's current economic challenges could play out for the country in a very real way - Currency is a must read. And if you want to be an early reader of a new author who has tremendous promise - Currency is definitely a must read.
Available ebook formats: epub mobi pdf lrf pdb txt html
Price: $9.99 USD
Buy Add to Library Give as a Gift
How gifting works
Create Widget
Tags: caribbean russia china bahamas iran debt interest rates economic crisis bond trading
About L. Todd Wood

This book is Amazing, Mr.Wood has an uncanny eye for detail in the story and for historical facts. Connor the main character is a pretty damn interesting character. The Really amazing thing is, he gifted me this book via twitter, which modern writers even reach out to their fans and readers like that! This book is definitely worth the purchase if you are a History buff and a fan of historical fiction. I hope Wood decides to expand his writing talent into the SciFi genre! I'd love to see him write a space opera with Massive space battles and boarding parties!

Concerning modern sources of monetary crisis, Wood sets the story of Currency (revised edition) in the near future. Historical glimpses scenically woven throughout, the reader is taken from a “gentleman’s” handling of dispute, through treasure hunting, passion, betrayal, to addressing the American need of financial correction. The fast paced read is enjoyable and highly recommended.

Be Careful Reading This Book, You Might Learn Something

Currency begins with a fascinating little romp through history on a search for missing pirate treasure then explodes into a thrilling tale of political intrigue and modern warfare. Connor Murray is a normal enough man, a bond trader by profession, when he learns that he is the sole inheritor of a trust connected to Aaron Burr. As he researches the details of the trust, events begin to unfold, setting him on a dangerous path. Not only is his life in danger, his county’s economy is going down the tubes. America’s constant borrowing to fix immediate problems has only delayed an inevitable economic catastrophe, one that is knocking at their door. As Connor comes closer to unraveling the mystery surrounding the long-lost treasure, the United States may very well be on the precipice of losing its dominance as a global superpower. As if that weren’t enough to deal with, he gets a second chance at love with a beautiful woman that he meets along the way.

Mr. Wood expertly weaves the title theme through three historical periods to create a captivating story. The historical accuracy in this novel is flawless. (I did extensive fact checking and learned a lot in the process!) The reader can be rest assured that even minor details are authentic. Mr. Wood has a solid grasp of real world economics as well as military hardware and operations. He also does a good job of capturing the essence of each time period and the feel of the varied locations in the book. The political/economic scenario presented in this story is not too far from the situation in which the US finds itself now. This is definitely a book to read very carefully or more than once to get the most out of it.

Mr. Wood’s writing style is enjoyable but could use some improvement. A few of the explanations temporarily pluck you out of the story. Editing errors (most notably comma and semicolon use) are a slight distraction.

*I found it interesting that Mr. Wood has a recurring theme throughout the book that it isn’t necessarily the people of a country that are bad, but it is the corrupt government officials who are usually the problem.

*I thought it was a nice touch to have Connor’s life mildly mirror Aaron Burr’s tragic one.

*My favorite quote: “…[foreign leaders] need to be scared of the United States, of her power and her will to use it.”

Here is a list of some of the interesting history and other neat stuff found in Currency:

(reviewed 48 days after purchase)
Sheyi Shobayo reviewed on Sep. 17, 2012
(no rating)
I read Robert's Conspiracy of the rich.

If you don't want to live like your so called baby boomers, then it will do you enough good to get this book.

Todd opened my eyes onto all I need know about currency, how it originated, the 'mess' behind it etc.

I don't wanna tell you all i learnt. Do yourself good, buy and read it.

This is a thrilling account of how ballooning government debt is destroying the $ AND the US economy that looks carefully at the role of fiat money in this looming disaster. Highly readable; entertaining with wide-ranging historical tidbits mixed with basic economic logic.

(reviewed 22 days after purchase)
Paul Harmon reviewed on April 16, 2012
(no rating)
"Currency" was a great read. Mr. Wood kept my attention with the initial introduction of history that I quite frankly had forgotten. Todd very believably blended the world of international finance, military action, and high intrigue. The story line is unique and captivating as in today's world some of us believe this could actually happen to America. His descriptions of bond transactions and military action made it more realistic because Todd actually lived the life he describes. Definitely recommend "Currency" for anyone wanting to know what could happen to the old USA. PH