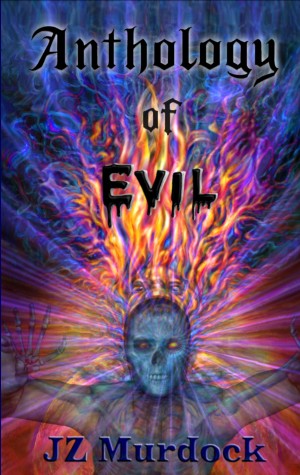 By JZ Murdock
The tales in this anthology examine the many forms of Evil. Evil is in our relationships, on the streets we travel, in the news, and in our entertainment. At times it's right in front of us and we don't even recognize it. No matter what the circumstances, Evil surrounds us in our daily lives, It is all around us, taking many forms. It patiently waits. Choose your next step well. More
These are my first and oldest stories. If you liked these, my next book DEATH OF HEAVEN has newer and I like to think better-written stories. Not to cast shade on this, my first book, which offers insight not only to my writings, but also to DEATH OF HEAVEN, which is based in part, on the novella Andrew at the end of Anthology of Evil. Some of theser are also available as a standalone ebook or elsewhere as audiobook.
TITLES-
In Memory, Yet Crystal Clear - Sci Fi / Horror - May feel familiar to some today.
Gumdrop City - Horror / based on True Crime - the prequel Gumdrop is being shot as a short horror film.
Quantum History - Sci Fi / Humor - A lab experiment goes bizarrely awry
The London Mea Culpa Document - Leads into the next story
The Mea Culpa Document - Medieval / Horror - a witch hunter questions his life.
Poor Lord Ritchie's Answer (To A Question He Knever Knew") - Medieval / Horror / Surreal - a prequel is elsewhere in "Breaking on Cave Island"
Sarah - Horror / Surreal - Dementia meets The Twilight Zone, originally a short screenplay.
The Fall - Horror - this short short led to the article G"ender Bender" on Indies Unlimted - http://www.indiesunlimited.com/2012/02/27/gender-bender/
Japheth, Ishvi and The Light - Horror / Zombies - Another tale elsewhere, Mr. Pakool's Spice leads into this.
Andrew - novella - Horror / Surreal / Sci Fi - The novella that led to my next book, DEATH OF HEAVEN.
Available ebook formats: epub mobi pdf lrf pdb html
First 15% Sample: epub mobi (Kindle) lrf more Online Reader
pdb
Price: $2.99 USD
Buy Add to Library Give as a Gift
How gifting works
Create Widget
Tags: horror scifi occult fantasy paranormal speculative fiction science fiction dark evil sf
About JZ Murdock

JZ Murdock is a writer/author and wannabe screenwriter, turned filmmaker in Bremerton, Washington. His works delve into science fiction, horror, the macabre and the bizarre, reminiscent of the "Twilight Zone", Poe, Lovecraft and PK Dick. His first horror story published was in a horror quarterly in 1990 and is also an audiobook ("In Memory, Yet Crystal Clear"). It's a Philip K Dick type story about how America becomes a dystopian society by foolishly following one man control over their media.

JZ Murdock's short stories are published in his books as well as various anthologies with other authors. He holds a degree in Psychology from Western Washington University. He was a Sr. Technical Writer in IT around the Pacific Northwest on some very high level teams, including one involved with national cybersecurity issues.

For ten years he shared his blog at Murdockinations.com since 2010, where his articles are now available as an archive of articles.

His newest film is a "filmic poem" and historical documentary titled, "Pvt. Ravel's Bolero". Released in January 2022 it won an award within a week on the film festival circuit as "Documentary - Best Film".

Murdock's screenplays include his true-crime biopic, "The Teenage Bodyguard". His horror-comedy screenplay, "Gray and Lover The Hearth Tales Incident", about a steampunk duo who fight demons, has been well received and was a semifinalist in the Circus Road Films screenplay contest.

The first full chapter his book "DEATH OF HEAVEN", is titled, "The Conqueror Worm", also available as a standalone ebook and audiobook (http://amzn.to/21QDauB). It's been said it is hard to start reading and not feel you have to turn the next page. One author/reviewer said at times it borders on poetry.

His first book, "Anthology of Evil" contains his older original short stories and a novella at the end that grew into, his first full epic book, "DEATH OF HEAVEN". His sequel, "Anthology of Evil II" is a two book volume. Book II, "The Unwritten" is a curious tale of three universes as they are drawn together to a curious ending.

His audiobooks are available on Amazon, Audible.com, and iTunes - http://bit.ly/1qXtMSl

Please feel free to stop by and visit JZMurdock.com for more. Also, LgNProductions.com, the film production company he co=- founded in 1993 and is now producing his own films through.

Anthology of Evil book trailer
A compilation of various types of evil, some of which might come from areas you would not normally consider....and some, you would. Available on Amazon at http://amzn.to/13eyY9D Also on Smashwords - http://bit.ly/HA60Ip Cover Art by Marvin Hayes - http://bit.ly/RQfgxq Zilyon Publications - http://www.calvinalmillerii.com/ Video by LGN Productions 2013

Reviews of Anthology of Evil by JZ Murdock

You have subscribed to Smashwords Alerts new release notifications for JZ Murdock.

You have been added to JZ Murdock's favorite list.

You can also sign-up to receive email notifications whenever JZ Murdock releases a new book.