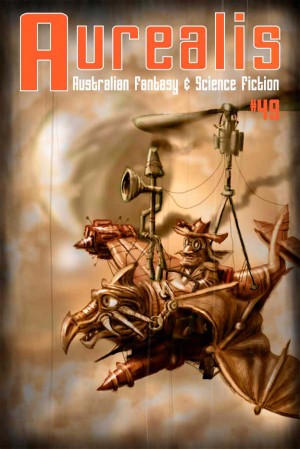 By Michael Pryor (Editor)
Rated 5.00/5 based on 3 reviews
This issue of the Australian magazine of fantasy, science fiction and horror, edited by Michael Pryor, features Sean McMullen, a doyen of Australian SF, and his hard-hitting ‘The First Boat'. In addition to the usual news and reviews, rising star Jason Fischer makes a splash with his slashingly good ‘Rolling for Fetch’ and Crisetta MacLeod probes the world of epublishing with Greig Beck. 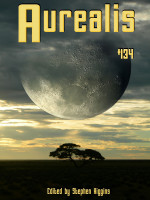 An excellent collection of speculative fiction. The presentation is sympathetic to the medium; bringing a new level to the reading and viewing experience. Excellent value.

Issue #49 of Aurealis Magazine is the first digital edition I have read. I am a fan of speculative fiction, especially in short story format, and the digital version works well. I should quickly add I am not a fan of technology, preferring to dog-ear pages of books and magazines.

It is no surprise, then, to read Crisetta Macleod’s interview with Grieg Beck about his forays into digital publishing. Other interviews I have read with publishers agree with Beck’s comment about printing costs being marginal to the overall production costs. He makes the point about public expectation as seeing no wad of paper involved therefore a digital publication should cost basically peanuts. He goes on to say the difference between ‘guys uploading their books for free or or 99c is if you have fine editing.’ How much life space does any individual have to wade through dross on the internet to find a good read? Will story editors in the digital future become as notable as let’s say movie producers in acquiring followers who trust their judgement, me wonders?

The First Boat by Sean McMullen is a story told by a thirteen year old caught in post-apocalyptic Perth where an Electromagnetic pulse bomb has destroyed all things electrical. The family escape marauding gangs by stealing a boat and steaming north. The boy’s father surmises that Indonesia is better placed for life without technology and the family will have a better chance there, mostly due to the father’s foresight in arriving when they do. The story ends with a twist on situations currently used for political advantage in Australia.

Rolling For Fetch by Jason Fisher is a dazzling story set in an unspecified period. The story opens with the character Whip being converted to a Skeg. His legs are amputated and a skeg rig fused to his shin-bone, a dive train is rigged to pneumatic tyres and he is no longer a typical human. Whip earns his gangdanna and joins a cruising mob who dash through metro traffic, wild like hornets. Jason Fisher creates a fascinating world where technology and nano science freely mix with nineteenth century horse cart and with steam bikes. Whip eventually gives up everything for love, but his physical modification has implications.

George W Bush is quoted as saying, ‘One of the greatest things about books is sometimes there are some fantastic pictures.’ A good point. Let’s not forget the book designers and artists who enhance a reader’s enjoyment of the publication. My one irritation of digital editions is that publishers have yet to get a good handle on the media; there is none of the pop-up windows, slide shows and other bells and whistles to feature art and design. For me to appreciate the front cover of issue 49, for example, requires scrolling around the image, and I don’t think the resolution is as good as a printed copy.

As for a monthly publication creating an outlet for those who love Australian speculative fiction, Aurealis Magazine is at the forefront and well worth dipping into.

The First Boat by Sean McMullen was an interesting take on how quickly Australia might collapse if some of our basic utilities (in this case electricity) were taken from us. The choice of the main point of view character was good, a young perspective mirroring the confusion of the time. McMullen’s characters are taking action when the rest of us would just be faffing around, and the twist at the end will resonate with Australian readers.

I am a big and growing fan of Jason Fischer‘s work, and Rolling for Fetch did not disappoint. Fischer describes a dystopian world of energy shortages and reverted transportation where some gangs have their feet replaced with wheels and perform couriering services. It is an excellent dissection of a transient subculture and the impact of what is essentially a fad where radical surgery is an option (and you thought you might regret that tattoo you got at university – at least you didn’t replace your feet with wheels!). The good news – Mr Fischer has a new short story collection coming out from Ticonderoga Publications called Everything is a Graveyard. The bad news – it isn’t due out until October 2013!

As always Carissa’s Weblog providing a round up of some of the more interesting articles around on the web in the area of Australian speculative fiction. I’d particularly recommend watching the video of Neil Gaimen’s recent event at the Wheeler Centre in Melbourne (mentioned in a previous new article on this site).

This issue also contained a very interesting interview of Greig Beck by Crisetta MacLeod, titled E-publishing: An Hour with Greig Beck. I do the bulk of my reading electronically these days, and as one of the inaugural authors picked up by the new Pan Macmillan all-digital imprint Momentum Mr Beck has some interesting insight into that rapidly evolving scene.

Michael Pryor’s short editorial talks about the importance of getting young people into science fiction, although I wish it had been just a slightly longer piece that talked about how we could achieve that worthy goal!

The What do you Think? section of the magazine contains a link to my review of issue #48. They are also running another online survey to get feedback on this month’s issue.

You have subscribed to alerts for Michael Pryor (Editor).

You have been added to Michael Pryor (Editor)'s favorite list.

You can also sign-up to receive email notifications whenever Michael Pryor (Editor) releases a new book.