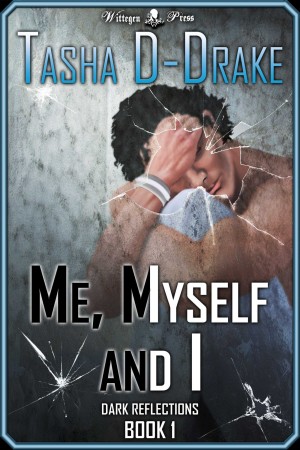 Me, Myself and I (Dark Reflections Series Book 1)

Rated 4.60/5 based on 5 reviews
Tristan is an actor and he plays a supervillain in the movies. At least he thought he did, but then he has an accident and he wakes up surrounded by the world of the films. Now he has to figure out if he's hallucinating, if somehow the movies are real and he's been transplanted to another world or if he is actually Devon, a supervillain having a psychotic break. Whatever the answer: it's crazy. More
Book 1 of the Dark Reflections Series

Tristan is an actor and he plays a supervillain in the movies. At least he thought he did, but then he has an accident and he wakes up surrounded by the world of the films. Now he has to figure out if he's hallucinating, if somehow the movies are real and he's been transplanted to another world or if he is actually Devon, a supervillain having a psychotic break. Whatever the answer: it's frighteningly crazy.

"Me, Myself and I" is a sci-fi/fantasy novelette (~15.5Kwds), with a heavy side of male/male romance.

Natasha is a British author with Wittegen Press and has been publishing genre fiction since 2011. Her work includes everything from horror to young adult fantasy and she has never met a genre she didn’t like. A prolific producer of short stories and novels alike, Natasha currently has over twenty five titles in her back catalogue with further releases always imminent.

Natasha has been writing since she was a young girl ever since she read The Hobbit at Primary School. She is a big fan of science fiction, fantasy and horror in all their forms and is a big advocate of fanfiction as a great tool for writers to polish their skills in a welcoming and supportive community.

Before establishing Wittegen Press with her twin sister, Sophie Duncan, Natasha was a database and systems consultant. She combines these skills with her writing to create and manage her career in the bold new eBook market.

I've been passing this book over because the description somehow made me think "horror" but it is actually pretty damn hot! I'd like to know if there is something between Devon and Gage and if Devon is ever redeemed.

I enjoyed this with it's central plot involving alternate realities. The central character is well fleshed out, but others are little more than cardboard cutouts. Filling them in more (no pun intended, with the protagonist being bi-sexual), though desirable, takes nothing away from the storyline or my pleasure reading it. I look forward to the next installment and I've downloaded one of her other books. It looks like Tasha is going to become a prolific writer, and if she maintains the high standard of writing with a gifted imagination she will be on my favorite author's list in no time at all.

Me, Myself and I (Dark Reflections Series Bk 1) by Natasha Duncan-Drake

This a delightful little story about a man, a movie and possible other realities. I like how fast paced it was, a quick read with delightful characters, hot m/m sex and a set up for the next book. What more could a reader want?

Tristan Havering is an actor that just wrapped up the filming of a three part movie. The first movie was good, the sequel did better and they are hoping for even better box office sales on this one. At the party that night someone pop a champagne cork right into Tristan’s forehead, he fell, hitting the back of his head on the wall.

When he woke up he found that he was inside the movie he had been filming. He wasn’t a character though, he was himself. It was set just before the beginning of the last movie, and while he woke up in the head quarters of Team Alpha, he was kidnapped by the character he played, a man with out of control powers that wants to wipe out Team Alpha because they didn’t stand beside him when his new powers spun out of his control.

Devon tells Tristan that he had been conducting an experiment, and part of his accident was what brought him into this dimension. The heat built, the character he played, that was here in the stronghold, was seriously not Tristan, to his mind, much more dangerous. It had been so long since Tristan had been with a man, PR said he needed girl friends, so would he take this opportunity to fulfill a need and an attraction? Would he make it back to his dimension? Or would Devon decide to keep him? Or kill him?

Wonderful, just what I have come to except from Tasha D-Drake, I love her work and will looking for more in this series. 5 stars for character development and heat. Thank you, Ms. D-Drake.

You have subscribed to alerts for Natasha Duncan-Drake.

You have been added to Natasha Duncan-Drake's favorite list.

You can also sign-up to receive email notifications whenever Natasha Duncan-Drake releases a new book.