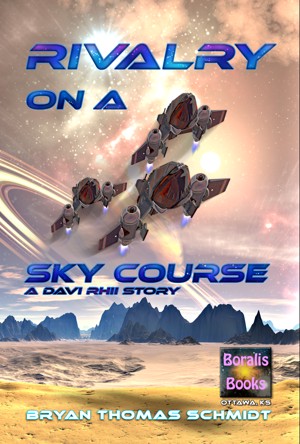 Rivalry On A Sky Course (A Davi Rhii Story)

Bryan Thomas Schmidt is the author of the space opera novels The Worker Prince, a Barnes & Noble Book Clubs Year’s Best SF Releases of 2011 Honorable Mention, andThe Returning, the collection The North Star Serial, Part 1, and has several short stories featured in anthologies and magazines. His children’s book 102 More Hilarious Dinosaur Jokes For Kids from Delabarre Publishing along with the anthology Space Battles: Full Throttle Space Tales #6 which he edited for Flying Pen Press, headlined by Mike Resnick. As a freelance editor, he’s edited a novels and nonfiction. He’s also the host of Science Fiction and Fantasy Writer’s Chat every Wednesday at 9 pm EST on Twitter, where he interviews people like Mike Resnick, AC Crispin, Kevin J. Anderson and Kristine Kathryn Rusch. A frequent contributor to Adventures In SF Publishing, Grasping For The Wind and SFSignal, he can be found online as @BryanThomasS on Twitter or via his website. Bryan is an affiliate member of the SFWA.
19 5-star & 4-star reviews THE WORKER PRINCE $4.99 Kindle http://amzn.to/pnxaNm or Nook http://bit.ly/ni9OFh $14.99 tpb http://bit.ly/qIJCkS.

The Glorious Life of The Soon To Be Published Novelist
Just before the release of his debut novel, The Worker Prince, in October, author Bryan Thomas Schmidt talks about what lies ahead (comedy) This book follows the events of "Rivalry On A Sky Course."

You have subscribed to alerts for Bryan Schmidt.

You have been added to Bryan Schmidt's favorite list.

You can also sign-up to receive email notifications whenever Bryan Schmidt releases a new book.