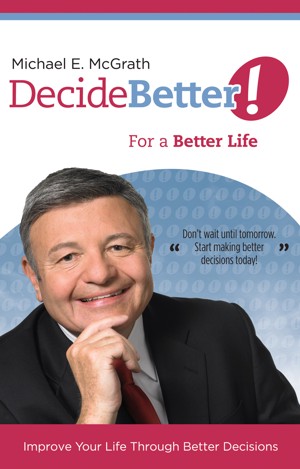 Decide Better! For a Better Life

Michael E. McGrath, referred to by many as America’s Decision Guru, is the author of recently released Business Decisions! - How to Be More Decisive in Today’s Economy, which has received much acclaim. Indra Nooyi, Chairman and CEO of PepsiCo said, “I’ve learned a lot of new lessons from Business Decisions!, and I’m sure everyone else will too.”

Michael is also the bestselling author of Product Strategy for High-Technology Companies and creator of the popular Decide Better! decision-making series which offers numerous resources including two other books to help people make better decisions. Decide Better! For a Better Life (2008) helps individuals and families with daily, short-term, and long-term decisions. Decide Better! For College (2009) won the prestigious Disney iParenting Award for its practical advice to high school and college students.

He is an experienced consultant, executive, entrepreneur, author and father who has studied and applied decision-making for more than 25 years. With Decide Better!, he brings that experience to others through books, seminars, trainings, web-based lessons and other media. Michael has been a well-known business consultant for 25 years, teaching decision-making techniques and processes to executives in some of the world’s largest companies.

Michael is currently the executive chairman of Thomas Group (TGI). As CEO he led the turnaround at i2 Technologies (ITWO) from 2005-2007, and he was formally chairman of the board of Entrust (ENTU). Prior to that, he was founder and CEO of PRTM, one of the most successful consulting firms in the world. He also serves on the boards of a hospital, a college, and Aidmatrix (disaster relief in Haiti).

With his top reputation and track record for being able to make tough, strategic decisions in the corporate world, Michael is highly sought after for his insight and opinions. He is frequently featured on television (CNBC, FOX Business, ABC, and CNN) and has done more than 100 interviews as an expert in business and decision making. His advice has appeared in many publications, including The Washington Times-Tribune, Bloomberg, Investors’ Business Daily, Industry Week, and more.

Michael has a B.S. in computer science from Boston College and an M.B.A. from Harvard Business School.

Decide Better! with Michael E. McGrath
Everyone, without exception, believes that they can make better decisions. They also realize that the decisions they make shape their lives, and that by making better decisions, they can improve the success and quality of their lives.

You have subscribed to alerts for Michael E. McGrath.

You have been added to Michael E. McGrath's favorite list.

You can also sign-up to receive email notifications whenever Michael E. McGrath releases a new book.