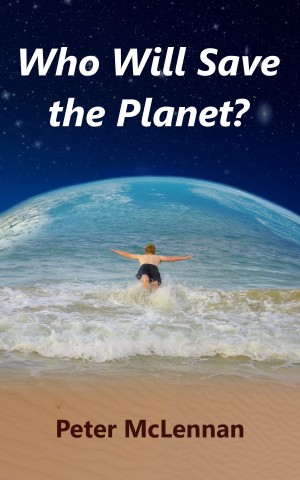 Who Will Save the Planet?

By Peter McLennan
Rated 4.75/5 based on 4 reviews
Fourteen-year-old Jason can’t work out how to get climate change fixed—until he saves the life of the mysterious and powerful Graham. Graham promises a reward, and Jason asks him to do something to stop climate change. The request is caught by the media, so Jason thinks the man’s trapped and has to keep his word.

But Graham’s got other ideas.

Jason’s got a fight on his hands. More
Fourteen-year-old Jason can’t work out how to get climate change fixed—until he saves the life of the mysterious and powerful Graham. Graham promises a reward, and Jason asks him to do something to stop climate change. The request is caught by the media, so Jason thinks the man’s trapped and has to keep his word. But Graham’s got other ideas.

A battle of wits ensues as Jason tries to stop his captive from squirming out of his promise. Encounters that initially sound like fun end up getting heavy, and Jason’s summer holidays get messed up by pushy reporters and resentful townspeople—not to mention a professor who seems to be on both sides at once.

Jason finds that things aren’t as simple as he first thought. With a deadline approaching, he has to decide whether to force Graham to honour his promise, or admit that he could actually be mistaken.
Download: epub mobi (Kindle) pdf Online Reader
Price: Free! USD
Add to Library
Create Widget
Tags: environment politics global warming climate change lifesaving carbon pollution emission controls
About Peter McLennan

Peter McLennan served for 28 years in the Royal Australian Air Force, where he focused on strategic planning. He has tertiary qualifications in engineering, information science and government, and a PhD in planning for uncertainty. He has had several non-fiction titles published.

About the Series: Who Will Save the Planet?

Jason might be only a teenager, but that doesn't stop him from taking on greedy adults who dare to trash his planet.

Also in Series: Who Will Save the Planet?

Reviews of Who Will Save the Planet? by Peter McLennan

Review
DanielleFKB reviewed on Dec. 28, 2019
(no rating)
Wonderful Book Peter! Awesome topic. We'd really love to feature it on Free Kids Books (https://www.freekidsbooks.org), to help you promote your site, I've tried all your contact methods, but can't reach you, alas, So hoping you might pick this message up.

Thoughtful, well written book that I enjoyed even more than I thought I would. I wish they'd make a book like this available to all school teens in this country.

I thoroughly enjoyed reading this story, curled up in front of my computer, whilst my teenage boys were cooped up in their room not caring one bit about the environment as young Jason Saunders does.

I was a little sceptical at first, as I have my own opinion and beliefs about Global Warming. But, the character development and the way Jason 'grew up' was wonderful. McLennan certainly spent more time focused on the growth and learning of the characters, namely Jason and the PM, rather than the politics of it all. The author did a wonderful job of keeping you focused on the issue, yet ensuring that you stay attuned to the characters and their feelings and ideals.

Jason is a true teenager, believing he is right and sticking strongly to his passionate plea for the PM to be in favour of emission control targets. But, he isn't so naive that he cannot think about the consequences of his choice once he has more facts.

The family dynamic was just wonderful. The fact that he could be upset at his parents, but still ask for their guidance shows a good family background. A nice change from the single families I often find myself reading about.

This is a story that our teens should read, if for no reason than to spark some passion about their futures in their dear hearts.

Well done, McLennan, may your next book be as wonderful.

(reviewed 10 months after purchase)
Holly Kench reviewed on May 4, 2012

Who Will Save the Planet is the story of Jason, a 14 year old avid computer game fan with ambitions of becoming a life saver, but he's also a young and passionate environmentalist. After a lucky turn which resulted in Jason rescuing the Prime Minister, Jason becomes the topic of media speculation and government policy problems when he asks the PM to introduce emission controls.

Sure of his belief in scientific evidence and the need to protect the future of the world, Jason must contend with criticisms from locals, including his father, who believe that emission controls will badly affect the local economy. He soon discovers that nothing is black and white, but not before he suffers repeated attempts at manipulation from government members, and multiple run-ins with the media.

While I strongly believe that fiction is an excellent educative tool, I was a little unsure how McLennan would handle this difficult topic. In particular, I was unsure whether such a message would be hard to write in a story that remained appealing to young readers. As such, I was pleasantly surprised to discover that the story was well paced and very enjoyable. The story flowed well, with no decline in plot appeal, had a light youthful voice and well defined, quite irresistible characters.

I particularly enjoyed Jason's family dynamic, and found Jason's character to be relatable and appealing. His cynical sense of humour was also very amusing.

[spoiler alert]
I was a little disappointed that Jason backed down in his request from the PM, despite winning out in the end. I understood that this was part of his lesson in seeing the world in its entirety with shades of grey, but felt disappointed that he did not stick to his guns over something he was so passionate about - particularly when his doubts resulted significantly from manipulation.

All in all this was a lovely read with a good message. I think most children would enjoy this book, and I look forward to a sequel.

(reviewed 2 days after purchase)
Michael Glider reviewed on May 3, 2012

Jason is a teenage Greenie, much to the frustration of his fisherman father. His radical views, (for someone of his age) result in him asking the PM of Australia to sign up to emission control targets. The repercussions of his seemingly ‘simple’ request take weeks to sort out. Over the course of the school holidays, Jason learns about the difficulties in managing a country; the amazing balancing act of keeping Australia’s economy, healthcare, education, environment and industry functioning; and how challenging it is to come up with conclusive reports on the health of the planet.

McLennan conveys these very real issues skilfully through the viewpoint of a normal Australian teenager. His analogies for are wonderful; resulting in an engaging read that explains climate change and the problems relating to dealing with it very easy to understand, even though the problems themselves are very complex.

I would recommend this book to any teenager, or older, who has an interest in the health of the planet and cares about what will happen to generations to come. Well worth the read. Well done!

You have subscribed to alerts for Peter McLennan.

You have been added to Peter McLennan's favorite list.

You can also sign-up to receive email notifications whenever Peter McLennan releases a new book.