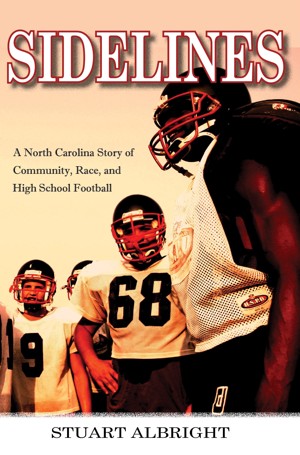 Stuart Albright earned his B.A. in English and Creative Writing from UNC Chapel Hill and a M.Ed. from Harvard. When he was only 26, Albright published Blessed Returns, a memoir about a summer he spent working in the slums of Camden, New Jersey. In 2009, Albright published Sidelines, which was hailed by the Sun Journal as "the definitive word" on high school football. His work has appeared in the News and Observer, Herald-Sun, and Independent Weekly. Albright currently teaches English and Creative Writing at Jordan High School in Durham, NC, where he also coaches football. In 2006, Albright was named the Durham Public Schools Teacher of the Year. In 2008, he received the Milken National Educator Award, dubbed the "Oscars of Teaching" by Teacher Magazine. In addition to teaching, Albright is a freelance editor and a regular guest lecturer on issues of urban education. He lives with his wife and son in Durham.

Reviews of Sidelines by Stuart Albright

You have subscribed to alerts for Stuart Albright.

You have been added to Stuart Albright's favorite list.

You can also sign-up to receive email notifications whenever Stuart Albright releases a new book.