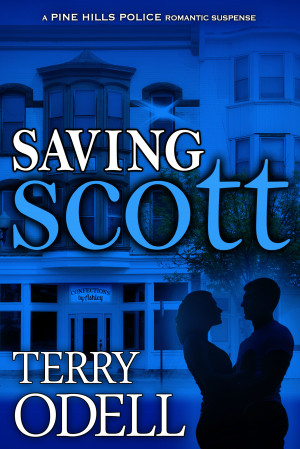 Homicide detective Scott Whelan lived for the job--until one day he was caught in the middle of a robbery gone bad. Although some call him a hero, he thinks of himself as a coward and a failure. He exists now in what he calls his "Dark Place". He accepts a new job as a civilian with the Pine Hills Police Department, thinking being close to the job will be better than leaving it completely. But when he finds himself in the middle of the investigation. Scott has to choose where his loyalties lie—with his brotherhood in blue, or his attractive new neighbor, who needs someone on her side. And figure out how to get out of the dark.

Against her parents' wishes, Ashley Eagan has split from her unsupportive fiancé and moved to Pine Hills to start her dream business: Confections by Ashley. Faced with countless construction setbacks, she fears her plans for the perfect grand opening will be ruined. When a dead body turns up in her shop, a delayed opening is the least of her worries. Now, she's afraid she's facing murder charges. Her new neighbor has connections with the police department, but he's sending mixed messages. One minute he’s the friendly, handsome neighbor, the next, he's playing cop. Not to mention he's carrying enough baggage for a world-wide cruise. If Ashley's learned anything since leaving home, it's that she's the only one she can count on.

Saving Scott is the third book in Terry Odell's Pine Hills Police series. Meet two new residents, and connect with some familiar faces as Scott and Ashley learn to work together and trust one another. Things heat up hotter than the ovens in Ashley's bakery when Ashley's a suspect in a murder investigation.

Terry Odell began writing by mistake, when her son mentioned a television show and she thought she'd be a good mom and watch it so they'd have common ground for discussions.

Little did she know she would enter the world of writing, first via fanfiction, then through internet groups, and finally with groups with real, live partners. Her first publications were short stories, but she found more freedom in longer works and began what she thought was a mystery. Her daughters told her it was a romance so she began learning more about the genre and craft. She belongs to both the Romance Writers of America and Mystery Writers of America.

Now a multi-published, award winning author, Terry resides with her husband in the mountains of Colorado.

Scott Whelan was a seasoned Homicide Detective before taking a job in a civilian position with the PHPD. Most people think of Scott as a hero, but Scott considers himself a failure and is beating himself up inside. He doesn't feel worthy enough to carry the badge, all because of a bank robbery that went south, even though, he was brutally beaten physically and has permanent damage.

Ashley Eagan recently moved to Pine Hills and in the process of opening a chocolate bakery which has been a life long dream. The contractors run into several glitches which threatens to halt her grand-opening. But, that's the least Ashley has to worry about. Another shop owner turns up dead in her establishment and Ashley is the prime suspect. Luckily, Scott, who happened to have just moved in next door to Ashley in her apartment building, doesn't believe Ashley is guilty and sets out to prove it. When another body is discovered, the police have another problem...too many suspects.

If you enjoy a good series with continuous characters; great plots, tons of suspense, action and romance, I highly recommend the Pine Hills Police trilogy.

You have subscribed to alerts for Terry Odell.

You have been added to Terry Odell's favorite list.

You can also sign-up to receive email notifications whenever Terry Odell releases a new book.