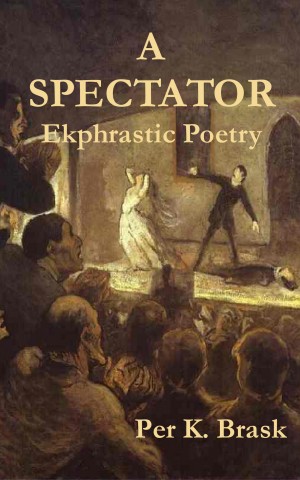 Per K. Brask is an accomplished poet, dramaturge and author. He has published poetry, plays, short stories, essays and literary translations. His co-translation with Patrick Friesen of Ulrikka S. Gernes’ Frayed Opus for Strings & Wind Instruments was short listed for the 2016 Griffin Poetry Prize.

Per is a Professor in the Department of Theatre and Film at the University of Winnipeg. He lives in Winnipeg, Canada, with his wife, Carol Matas, an international bestselling author of books for young people.

Learn more about Per K. Brask

Review
Perry Nodelman reviewed on on June 1, 2012
(no rating)
A spectator is on display. No showoff, he puts on a good show just by showing up at all sorts of shows, just by saying, i.e., showing, what he sees there, just by showing the rest if us what he is himself shown by means of saying how he sees it. A watcher well worth watching, then. And while watching the watcher, I wonder who or what is watching me. That's how I see The Spectator, and how I am seeing in response to its spectacle.

THE SPECTATOR
The play over, the fiction dead,
the audience goes home.
Lights to black.
But, the theatre is real,
and so too are those realms and themes
for which no temporal or rational constraints exist.
They live, bred or transformed by the play,
in us, in our dreams,
and in our lives thereafter,
between us, during discussions,
on the drive home,
and over our after-theatre desserts.

Per writes a poetic response to the play,
but it is not the play we saw,
its moments, poignant or not,
its plot and characters,
but, rather, the play through his eyes,
through his heart
and experience of it.
Per does not profess to scrutiny of structure,
to analysis of character,
to precision of examination,
to perceptual reliability and validity.
There are neither stars nor “thumbs up” here.
No attempt at objectivity of judgment.

But that’s the point.
Per, in his ekphrastic rendering, is everyman,
every audience member,
and, same time, none but his unique self,
defined by his particular knowledge,
by his previous experiences,
by his biases and needs,
sensitivities and sensibilities.

Yet, somehow, I know the play,
its realms and themes,
better after reading his poem
than if I had read a three-column review in the Free Press.
When Per writes about the play,
I hear him -- not a reviewer ex cathedra.
Per’s voice, his excitements, his engagements,
Per wanting to dialogue
about its realms and themes
over coffee at Starbucks.

Per Brask's A Spectator contains many insights on, and from, watching theatrical performance, but its greatest accomplishment is its practice of ekphrasis. Adopting a highly dramatic form for his literary account of theatrical events, Brask offers an ongoing behind-the-scenes look at how one might attend to a work of performed art, as well as a fine example of the affect of dramatic writing. A Spectator offers an engaging series of reflections from an engaged spectator with a playwrights pen.

You have subscribed to alerts for Per K. Brask.

You have been added to Per K. Brask's favorite list.

You can also sign-up to receive email notifications whenever Per K. Brask releases a new book.