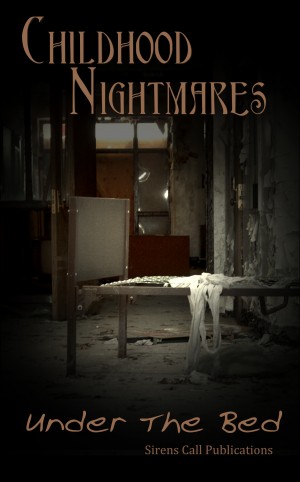 Childhood Nightmares: Under The Bed

By Sirens Call Publications
Rated 4.00/5 based on 1 reviews
They haunt us all.

Those whispered tales of monsters hiding under the bed, or of the demons lurking in the shadowy corner where we dare not glance for fear that seeing them will make them all too real. Oh, how the innocent landscape of a child’s imagination lends fertile soil to horrors ready to be sown on the slightest of sounds...

Tell us, who is Under the Bed? More
They haunt us all.

Those whispered tales of monsters hiding under the bed, or of the demons lurking in the shadowy corner where we dare not glance for fear that seeing them will make them all too real. Oh, how the innocent landscape of a child’s imagination lends fertile soil to horrors ready to be sown on the slightest of sounds; the tales and the terror they wreak on our youthful minds never quite leave us.

We asked the authors in this collection to reach into the forgotten recesses of their twisted minds and share with us the tales of nightmares that can only thrive in the hidden corners of a child’s imaginings; the bogeyman under the bed, the outlandishly fiendish creature lurking in the dark, the slight murmur of sound coming from the hall… did you close the door completely?

Explore the myriad of terrors that only a child can twist from nothing into some ‘thing’ in the span of a single rapid breath. Do you dare delve into your own memories? Perhaps you’ll start sleeping with the lights on again...

Tell us, who is Under the Bed?

The driving force behind the Sirens Call Publications team is three like minded individuals who share a passion for brilliant literature in whatever form it takes. Our intent is to take hold of the publishing world by the horns, give it a good shake and ride it all the way to success - not only for ourselves, but for our authors as well.

We focus on edgy fiction; releasing novels, novellas, and anthologies that will captivate and linger long after the reader is done.

Remember when you were a kid and in the dead of night you'd hear a sound? A sound you were convinced came from within your room? Maybe it came from underneath the floorboards, in a big old wardrobe or, even worse,from under your bed? Well if you do remember then this collection of short stories will make those bad memories burst upon your mind with a cringe and send a shiver down your spine.
There are twelve stories here.
'Forgotten' by Jack Wallen: Dylan hears an eerie voice of young girl beckoning him to play a game with her. While he is initially petrified, curiosity and bravery soon overcomes him. As Dylan befriends the little ghost girl, he is unaware that this ghost holds a dark family secret and grave intentions.
'Baby Teeth' by Kim Krodel: As Brian loses his first ever tooth, scare stories about the gruesome tooth fairy results in family tragedy.
'Madeleine' by Julianne Snow: Young Stella is plagued every night by dreams about the deaths of her family. All is forgotten however when Stella's birthday arrives and she is gifted with a beautiful doll. The doll is said to steal away nightmares but Stella soon discovers that some things are worse than bad dreams.
'Telling Tales' by Phil Hickes: Peters Great Aunt loves to terrify the boy with violent and disturbing bedtime stories. whilst he thinks she's just mean there is a hidden warnings in those tales the boy should have listened to.
'Excess Baggage' by Lisamarie Lamb: A tale that proves not all bedtime spook stories focus on children. Adults can be targeted too.
'Timothy' by Joshua Skye: Debts must be re-paid in this violent story of a kid versus a clawed and clever beast.
'Show and Tell' by Kate Monroe: Tommy resents being the family disappointment, the laughing stock and the bullied so he calls into action his very special best friend, namely the monster that lives in his bedroom.
'The Confession of a Confirmed Has-Been' by John McIlveen: The ghost of a man becomes attached to the little girl of the family that has moved into his old home. So attached that he wants her to stay with him forever and ever.
'Seeing is Believing' by Amber Keller: The disbelieving parents of a terrorized boy discover that there really was something there all along.
'Bent Metal' by Nina D'Arcangela: A distressing nightmare about a car crash lingers in the mind of girl all day in this touching terrorizer with a twist.
'Shades of Red' by Colin F.Barnes: A man under arrest for mass murder accounts his early years to a psychiatrist. But did he kill or was it a something called the Shade?
'Socks' by Brandon Scott: Is a grandfather's tale of a sock drawer monster real or folly? Empty the drawer and find out.

Altogether this a good collection of stories. The restrictions implemented by the overall theme of the book do lead to a little repetition in the form of content but there are also some quite brilliantly executed nail-biters that more than make up for it in the form of fresh ideas and truly interesting avenues that are as unpredictable as they are frightening. So, if you feel like reliving those formative years where ever noise in a dark room meant there was a monster just inches away, I recommend this book. Read it before you go to bed for full effect. Enjoy.

You have subscribed to alerts for Sirens Call Publications.

You have been added to Sirens Call Publications's favorite list.

You can also sign-up to receive email notifications whenever Sirens Call Publications releases a new book.