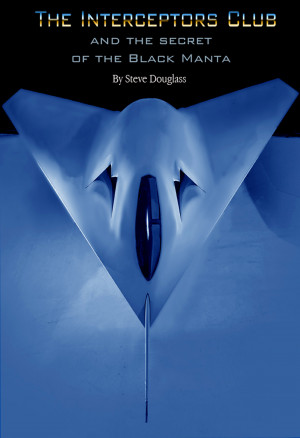 The Interceptors Club and the Secret of the Black Manta

By Steve Douglass
Rated 4.83/5 based on 6 reviews
Think "Sneakers" meets "The Hardy Boys", Static and his rag-tag gang of teen techies are tricked into hacking into and stealing the prototype of an unmanned stealth warplane.

Author, investigative journalist, technologies expert, and self-avowed "Stealth Chaser," Steve Douglass is considered by many an icon in the esoteric-yet-fascinating field of military monitoring.

By day, Douglass is the chief photojournalist for ABC 7 in Amarillo, Texas. His communications monitoring expertise has helped break both national and international news stories for ABC News, CBS News, CNN, the Associated Press and others.

He was one of the first to photograph the tragic re-entry of the Space Shuttle Columbia as it streaked to its doom over Texas and alerted the world’s press when a Russian submarine sank in the Atlantic due to a fire in a missile compartment.

On 9-11, Douglass monitored the frantic aero communications of that tragic day and kept the press informed of the FAA’s and the military’s desperate attempts to distinguish hijacked aircraft from those packed with innocent commuters.

As an author, Douglass' first book, The Comprehensive Guide to Military Monitoring, is considered by many the bible on the art of intercepting military communications.

He has also written many feature articles on emerging stealth technologies, aviation, astronomy, and cutting-edge technologies for Aircraft Illustrated (UK) Popular Science Magazine, and has been a behind the scenes contributor to Aviation Week & Space Technology Magazine, the "must read" publication of the defense and aviation industries.

Douglass' unsurpassed know-how in the field of military monitoring made him the subject of a Wired magazine article in addition to taped segments on NBC's Unsolved Mysteries, CBS News, and filmmaker Michael Moore's acclaimed TV Nation.

He has also appeared in ten "black project" related TV shows that have aired on the Discovery and Learning Channels. Most recently Douglass appeared in “Weird or What” as an expert debunking the Stephenville UFO sightings.

Prior to his current incarnation, Douglass was a photographer for the Amarillo News-Globe newspapers. His innovative photographic illustrations were honored by The National Press Photographers Association's 1988 Pictures of the Year Competition, considered by many to be the "Oscars" of photojournalism. After leaving the Amarillo Globe News, Douglass became a freelance photographer and journalist and ran his own news-gathering and research company "The Reporter's Edge."

He is also a professional photographer,web designer, videographer, editor and graphic artist.

In his spare time, Douglass is an avid tornado chaser and storm spotter volunteering for the National Weather Service. Recently Steve was engaged as a location scout and researcher for Florentine Films (Ken Burns) on “The Dust Bowl that aired on PBS in 2012. In 2013 he became a full-time photojournalist for KVII TV.

Currently Steve is working on a sequel to, “The Interceptors Club and the Secret of the Black Manta" and you can read his intelligence blog Black Horizon at this link: http://deepbluehorizon.blogspot.com

Here I am, 57 years old and thoroughly enjoyed this book. I took me back to some of the shenanigans I put myself through as a teen. As Author, Steve Douglass has the ability to put the reader straight into the eyes and heart of an early teen. It was a joy putting myself amongst those of the Interceptors Club. I would enjoy reading a sequel! -Jim Clark, Dallas

Amazing book, when this book hits its climax, you CANNOT put it down..... I hope it comes out in print format, so I can add it to my collection of all time favorite books!

A great read for all ages. Given that it's a thriller based upon what may or may not be 'out there', Steve's treatment is especially credible to those with an interest in the subject matter. All too often I lose interest with fiction based upon Area 51-type stories when the roots of credibility become incredible and this is definitely not one of those. I liked the characters, found their traits amusing as I recognise the same in those I know. Clearly, it's fiction loosely based around Steve's own personal experiences and he is hopefully proud of producing a good, difficult to put down, read.

(reviewed 22 days after purchase)
Jim Whitten reviewed on April 23, 2011
(no rating)
The Black Manta was a fun easy read and the discriptive adjectives were well done. The first third of the book was in the realm of possible while the last third was in the realm of sci-fi. If such a "plane" existed, no country on this planet could stand up to its fire power. Many more books could be written with the theme of some of those countries trying to learn the secrets of the Black Mantra.

This book was great. It was one of those books you can't put down until you finish it. The plot was interesting and the writing was very descriptive and made you feel like you were there. It would be a great book for young readers even those not particularily interested in sci-fi. This book can be read by an un-technical person but still has enough technical information to appeal to a real interceptor.

(reviewed 6 days after purchase)
Phil Patton reviewed on Dec. 18, 2010
(no rating)
This is a thriller with a human side. It is all about secrecy and the mystery of technology and the sinister and the innocent I would compare to another novel that might come as a surprise: To Kill A Mockingbird. Why? Because both books take on deep and important issues through the eyes of kids. In TKAM it is race, here it is the nature of knowledge and suspicion. As someone who has seen government and organizations at work, I sense truth and insight here. Highly recommended. Many stars!

Was a fun read. I enjoyed it and recommend it especially to scanner/radio hobbyists.

(reviewed 39 days after purchase)
Greg Hillen reviewed on Oct. 7, 2010
(no rating)
I just finished reading Steve’s book, The Interceptors Club And The Secret Of The Black Manta. It was honestly a fun read. I read a lot of Dale Brown and Stephen Coonts and this book is in the same genre, but less heavy and more light hearted. It may, in general, appeal more to younger readers, but as a service brat and early reader of Hardy Boys and Tom Swift novels, I was quite comfortable with it. And as a 34 year DoD employee, I recognized a lot of the terminology as fairly accurate. The pace is slightly slow at first while characters and plot line are developed, but picks up in good time and becomes a bit of a page turner. The plot is all too plausible with a twist at the end that I really liked. At the price you really can’t go wrong. I’ve paid a lot more for books I liked a lot less. I recommend it.

One cool book, both for teens and adults. I'm over 30 and totally enjoyed it. The story is fresh and and unlike anything I've read. It reads more like a true account then fiction - in fact I can't but help wonder how much of this book is based on real life.

The Interceptors Club is a unique adventure story that takes the reader into the minds and eyes of a group of precocious teenagers (air force brats) who become caught up in a dark world of espionage, stealth aircraft and military intrigue. Although it is a big book - comparable to the size of Harry Potter books - I never found myself bored or tempted to jump ahead. The characters are three dimensional and fresh and talk like kids talk. It's funny an amazingly detailed look into the "black" world and even has a tad of spirituality thrown in to boot. In short - one cool read.

You have subscribed to alerts for Steve Douglass.

You have been added to Steve Douglass's favorite list.

You can also sign-up to receive email notifications whenever Steve Douglass releases a new book.