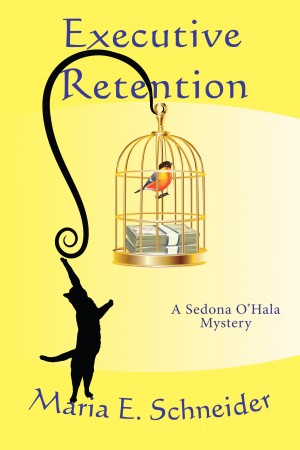 By Maria E. Schneider
Rated 4.00/5 based on 1 review
After solving one case of corporate crime, Sedona expected to get her peaceful life back. Problem: She is still a manager at Strandfrost, and there is still rampant jealousy over her promotion. Is the danger of being railroaded by her not-so-illustrious colleagues worse than taking a new undercover job from Steve Huntington?

Book 2 in the Sedona O'Hala series. "Executive Lunch" is the first. More
After solving one case of corporate crime, Sedona expected to get her peaceful life back. Problem: She is still a manager at Strandfrost, and there is still rampant jealousy over her promotion. Is the danger of being railroaded by her not-so-illustrious colleagues worse than taking a new undercover job from Steve Huntington?

Crooks are coming out of the woodwork and family troubles are stewing. Sedona needs to keep her sanity intact, piece together mismatched clues and dodge more than one stray bullet. If she can manage all of that, maybe she'll have time to figure out whether her love life stands a chance.

Maria writes cozy mysteries, romantic fantasy, paranormal mysteries, urban fantasy and has just completed a ghost story. Audio books for some of her novels can be found on google play or kobo books.

It’s gardening season again! I go out every morning to water and plant. Had just started the sprinkler, when I realized a bird had become tangled in the support strings hanging off the tomato cages used to prop up large tomato vines.

Upon closer inspection the fluttering, frantic “bird” was actually a baby dragon. “Not again,” I muttered. Dragons were so temperamental. Birds couldn’t singe me while I freed them either.

“Okay, you. Hold still.” I shut the water off, leaving the poor baby dripping. His dark blue head feathers hadn’t yet hardened into spines. Most of his iridescent scales were a mix of brown, light yellow and white. Later in life he’d probably turn more beige and sage to match the desert terrain.

I retrieved clippers from my garden cart, an old rag that used to be a kitchen towel and approached slowly. The dragon’s eyes were huge, wide orbs staring piteously up at me.

“You’re gonna hafta hold still,” I ordered. “I’ll cut you free.” Scissors would be a better tool, but I hated to leave him there, dripping, sad, and at his young age, vulnerable.

“Do not flame me,” I instructed, cutting at string behind him. This particular piece of twine wasn’t holding him at all, but he needed to adjust to my intent. Snip, Snip. The string frayed instead of cutting clean, but I kept at it. The dragon’s snout was wide open in distress.

“Gimme a couple of minutes and you’ll be free.” I ran the old towel down his back, squeegeeing his scales and accidentally smashing down a few feathers. He looked worse for it, but he barely dripped anymore. I finally freed one clawed foot. Predictably, he tried to fly, but his wing still had a cotton string running under and around. I latched onto it and half pulled, half cut the threads. He shredded the rest of the string and left a pretty good sized trench in the back of my hand from a toothy, smokey strike.

“Dammit!” I snatched my hand back. “Ease up, little one!” More cutting and suddenly he squawked, much like a bird, and bounced off the wire gate. He was still pathetically wet and in such a hurry, he splatted rather ungracefully onto the ground face-first.

A large shadow covered the sun, putting me and the little dragon in a gloomy, dark shade. The baby bobbed onto clawed feet, trilled an excited call and stared over my shoulder.

I swallowed hard, still leaning over the little guy. The clippers were a visible, threatening, but inadequate weapon.

With my heart making more noise than the baby dragon, I dared turn my head and only my head. Like a giant scaled bear sitting on her haunches, there was mom dragon. Her gray snout wound between two juniper trees, easily capable of taking a chunk out of my butt, which was inconveniently still high in the air. I knew the rules. Humans who saw what they weren’t supposed to see had to die, lest the magical others be discovered. “Never saw a thing,” I said. “Wouldn’t dream of telling a soul.”

Her diamond eyes seemed small compared to those of the baby dragon, but that was because her head was longer than my leg. She didn’t blink, letting slit, golden eyes convey a very nasty threat. She didn’t let loose with flame, even though a mysterious forest fire that cindered me, my house and my garden would likely be blamed on an errant lightning strike. Her gaze did search the sky hopefully, but the desert of New Mexico is often devoid of clouds.

“Not a soul,” I repeated, while baby dragon fluttered, fluffed and hopped over to his mother.

A tail many times larger than the largest of rattlesnakes snaked out from behind a pinon pine, gathering junior dragon inside protective scales and muscles. His protesting squawk was a direct result of her hurry and displeasure.

I straightened. No sense dying in a bad position with my butt up in the air.

She regarded me with solemn focus before one giant, black talon stepped back. Scales rippled with desert colors, reflecting gray-brown tree limbs mixed with mottled green and blue sage speckled with chamisa yellow.

My hair blew straight back, and the ends split from the sudden heat. “Not a word,” I agreed with a very emphatic nod.

Of course I was lying. In the dark of the night, behind closed doors, I write about dragons all the time. Dragons of Wendal is the first book of one such series. Sure, it’s billed as fiction. No need to have mom dragon come back looking for me!

About the Series: Sedona O'Hala Mysteries

Review
Yvonne Hering reviewed on July 18, 2010
(no rating)
Sedona O’Hala returns for another exciting mystery as she finds herself in danger of losing her job at Strandfrost. When Steve Huntington offers her a chance to assist him in another corporate mystery, she hesitates but agrees to help him by going undercover at Acetel - a company with quite a bit of business but not much money to show for it. Sedona’s job is to find out where all the money is going.

In the midst of everything, her sister-in-law is about to have a baby and desperately needs Sedona’s advice on how to handle her boss. Not to mention that Sedona finds herself quite attracted to Steve, as well as his brother Mark. Things get pretty dicey as she can’t distinguish the good guys from the bad guys.

This story has it all – mystery, twists, and even a dash of romance. This is the second book in the Sedona O’Hala Mysteries. The first was Executive Lunch, which I also enjoyed very much. This book develops the characters even more. Maria E. Schneider is well on her way to becoming a favorite author with her creative, clever and quirky stories and characters.

After working with him on a previous contract Sedona O'Hala should know better than to accept a dinner engagement with Steve Huntington. Especially when he wants her to leave her current managerial job at Strandfrost to take up another undercover one at Acetel services. There are rumours rampant about mismanagement at Acetel and Steve needs Sedona to become one of the employees and find out what is really going on. Their dinner where he is to tell her all turns into a disaster when two goons turn up looking for Steve and he makes a quick exit leaving Sedona to pay the bill.

Just as Maria's first Sedona O'Hala book EXECUTIVE LUNCH struck a chord with me, so did EXECUTIVE RETENTION. Someone appears to be reducing the company's profitability, and not even retrenchments are restoring it. I am very well aware of the pre-occupation with the balance sheet. I thoroughly enjoyed the plot of this latest offering.

You have subscribed to Smashwords Alerts new release notifications for Maria E. Schneider.