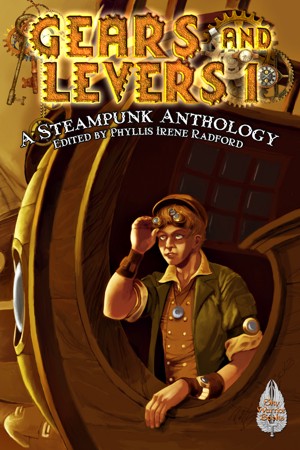 Gears and Levers 1: A Steampunk Anthology

By Phyllis Irene Radford
Rated 5.00/5 based on 2 reviews
A Quest for the Mind and Soul

Come, my friends, adventure and romance awaits in worlds that never were but should have been. Magic and science blend together as Gears and Levers explores the quest for all that makes up humanity. Battle pirates, travel back in time, fly in dirigibles, explore the wonders of the Orient, and walk with automatons in twenty amazing tales set in Steampunk lands More
A Quest for the Mind and Soul 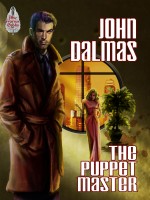 Reviews of Gears and Levers 1: A Steampunk Anthology by Phyllis Irene Radford

Love In The Balance by David D. Levine is a Victorian space opera with a very different take on zeppelins.
Secundus by Brenda Clough is a blend of Little Women and steampunk Frankenstein.
Night Without Darkness by Shannon Page and Mark J. Ferrari is a very engaging story about where nightmares come from.
The Shunned Butterfly by Livia Finucci is a steampunk Aesop's fable.
A Rumor, a Blade, and a Discourteous Intrusion by Rhiannon Louve is an action-packed story that reminded me of Girl Genius.
This Other Place by Bruce Taylor is a story about a man who finds instructions for building a mysterious machine.
The Gestalt Princess by James Brogden is a steam-powered cybernetic love story.
The Typhoon of 1901 by Christopher L. Eger is a Tom Clancy-esque War of the Worlds.
Tommy Tales by Bob Brown is a story of Victorian cyborg prejudice.
The Ruby Curse by S.A. Bolich is a wizards' battle with steampunk gadgetry.
The Third Dragon by George S. Walker is a Chinese steampunk fairy tale.
Bijou LaVoix and the Coal Dust Faery by Malon Edwards is about four kids out to kidnap a fairy. The characters were fascinating.
Damned if You Do, Damned if You Don’t by Joyce Reynolds Ward is an Oregon history excerpt. If Oregon had zombies and unicorns.
Of Blood and Brass by K.L. Townsend is about a clockwork geisha.
The Pirates of Baja by David Lee Summers reveals post Civil War pirates with a very different sort of vessel.
Time of Autumn by Aidan Fritz is a Korean story about clockwork ancestors and choices.
The Festival of Flame by Chris Wong Sick Hong is an alternate history of the Boxer Rebellion and an assassin assigned a surprising target.
Underbelly by Edward Martin III shows the crime-fighting team of Neville and Constance pursuing a murderer in a city floating in the sky.
Rumiko by Aleksandar Žiljak tells of a romance in Croatia. Plus ninjas and secret blueprints.
White Swan by Irene Radford has a battle between pirates and slavers in dirigibles. With an ex-husband thrown in.

Enjoyed and would love to see more of these characters.

You have subscribed to alerts for Phyllis Irene Radford.

You have been added to Phyllis Irene Radford's favorite list.

You can also sign-up to receive email notifications whenever Phyllis Irene Radford releases a new book.