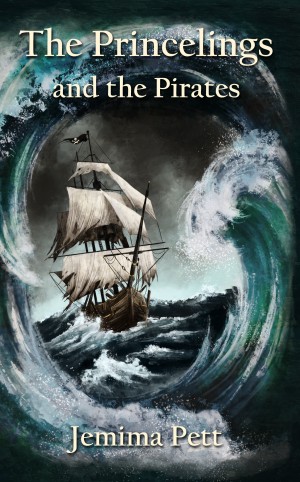 The Princelings and the Pirates

By Jemima Pett
Rated 4.33/5 based on 3 reviews
The second Princelings book, The Princelings and the Pirates, starts with Fred and George at Castle Buckmore. The non-delivery of wine makes Prince Lupin despatch them to Dimerie to discover what has gone wrong. Captured by pirates, shipwrecked, and in danger for their lives, the heroes are drawn into the Battle of Dimerie, where Fred meets his true love and George gets more than he bargained for. More
The Princelings of the East is a trilogy relating the adventures of unlikely heroes Fred and George. Two innocents abroad, they solve problems caused by unintended consequences, commercial greed, and blind prejudice—and still find time to engage in troubled love affairs and nearly blow themselves up with their own inventions.

The opening of The Princelings and the Pirates, the second book in the series, finds Fred and George happily pursuing their interests and enjoying the hospitality of Castle Buckmore. When Prince Lupin of Buckmore announces his unhappiness with the wine, they set off to discover what has gone wrong at the winery. Captured by pirates, shipwrecked, and in danger for their very lives, the heroes are drawn into the Battle of Dimerie, where Fred meets his true love and George gets more than he bargained for.

Suitable for confident readers ages 10 and over, The Princelings and the Pirates is a fantasy adventure where guinea pigs rule the world. It combines a generous amount of swashbuckling with a dash of concern at society's ills spiced with the stirrings of a first love interest.

This second book in the series is available in print as part of the Princelings of the East Trilogy - see link for details.

Praise for Princelings and the Pirates:

“Princelings and the Pirates opens with a Princess being abducted by smelly pirates on a foggy night. Oh no! Then we switch to our heroes, Fred and George, enjoying a leisurely lifestyle at Castle Buckmore... they soon get embroiled with the pirates and this leads them into plenty of adventure. In this second story in the trilogy we meet plenty of old friends but also make new ones. I particularly like Haggis and Neeps. It's good to see Victor adding his unique comedy touch again. What a star he is!” AmazonUK reviewer

Reviews of The Princelings and the Pirates by Jemima Pett

Another great story about the adventures of our furry friends, Fred and George. This time they get a LOT of action with, and against, pirates. Sadly there are some characters we won’t meet again, however, there are some we certainly will.

This was an excellent second book for the series. I love the characters, and the plot is exciting and interesting. Like with the first book in this series, I think it could have been even more amazing if the author had used more guinea pig terms rather than people words, such as "cavie" instead of "person" for example. However, since I know this is just something I personally think would have been a nice touch, and not doing so doesn't spoil the story in any way, I'm not going to count her not doing so against her.

Our Princeling twins, Fred & George, face unexpected swashbuckling adventures in The Princelings and the Pirates. The adventure starts off innocuously enough - the wine from Dimerie has run out and the person that Castle Buckmore originally sent to find out why hasn't returned, so Fred, George, and Victor set out for Castle Dimerie to discover what's wrong. Along the way, they get kidnapped by pirates, meet beautiful princesses, as well as dig out long hidden secrets.

I'm not entirely sure why I didn't feel as engaged with this second book of the trilogy. I love swashbuckling adventures and I did like The Princelings of the East quite a bit, so I was actually looking forward to this one a lot. Maybe it suffers from the general middle syndrome of almost all trilogies. Then again, I think that the Princeling books can be read as standalones so that shouldn't really be a factor.

It could possibly have felt a little disjointed - The Princelings of the East centres pretty much around Fred and George, and is located primarily Castle Buckmore with the occasional time travel, but The Princelings and the Pirates has a much wider scope. In this one, we jump from Castle Buckmore, to Castle Dimerie, pirate ships, Castle Marsh and the deserted Castle Fortune, with a few other castles being mentioned and thrown into the mix.

Whatever it was, Pirates was still a pretty good read.