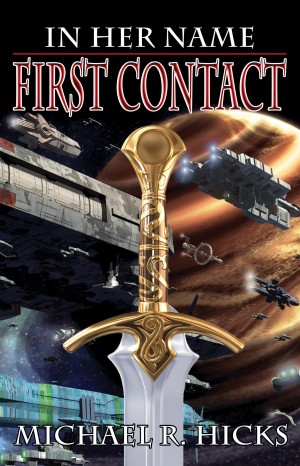 By Michael R. Hicks
Rated 4.58/5 based on 12 reviews
Young Midshipman Ichiro Sato joined the Terran Navy to escape a tyrannical father and find freedom among the stars. He had no idea when he boarded the survey starship Aurora for his first assignment that he and his crew would make humanity’s first contact with a sentient alien species. Little did he know that this fateful encounter would trigger a catastrophic galactic war... More
In the first book of the In Her Name: The Last War trilogy, the Terran survey ship Aurora makes a startling discovery in an uncharted star system: two planets inhabited by an advanced, and decidedly unfriendly, non-human civilization. Disabled by gigantic alien warships before it can escape, the Aurora is boarded by nightmarish blue-skinned warriors with claws and fangs who slaughter the crew in ritual combat using primitive weapons. The sole survivor, Midshipman Ichiro Sato, is returned to Earth as a messenger bearing a device that warns of an impending attack.

For that is the way of the Kreelan Empire, which has waged war against civilizations across the stars in its quest for a savior, one not of their own blood, foretold in an ages-old prophecy. With only a few generations left before their ancient species faces extinction, the Kreelans will wage their last war against humanity, hoping against hope for redemption of sins long past.

If you’re new to the In Her Name series, here is the author’s recommended reading order:

Reviews of First Contact (In Her Name, Book 1) by Michael R. Hicks

Fantastic. I wish I can rate it more, 5 stars?? Too low
An awesome and interesting novel!! Good job writers - keep it up...
A must-download!!

I've wondered, in both books I've read of this series, are the Kreelans strictly for entertainment, or is there a message behind them? As entertainment, for many people, they are just perfect, but for me they are a horror. A society living for war and war alone reminds me of ISIS or something like that. The fact that they are female grosses me out completely. The fact that they are humans in all things but skin color and fingernails makes it even worse. Is this a symbol for race war? Is it about feminism? If there is a message in this, other than the glorification of war, I've probably missed it.

I'll be as objective as I can and rate this on the quality of the writing, plotting, characters and give it four stars, but if I hadn't read 'Empire' first, I might not have made it thru this in spite of how well done it is. I've put down others written as well because I'm just not into the violence.

'First Contact' is a splendid SF novel. I read it (the first time) in one sitting. I enjoyed every page.

My favorite aspects of the book were the alien space ships, their technology and mentality, especially the way Michael R. Hicks describes these from both a human and alien perspective.

I'm looking forward to reading the next two books in the trilogy!
Now where the heck did I put my credit card...

One of the best sci-fi books that I have had the pleasure to read in a long time.

This book belongs on Baen.com. I see David Webers influence but it so stands on it's own. The nod to Tank Girl really got me and when her father picked up the sabre I did shed a tear. The one thing I love that you didnt do is tell me how many missiles, how many pen-aids, effects of ECM and ECCM, and eventually how many missiles made it to the target...like I said I love David Weber but man..I will be purchasing the rest..Thank you Mr. Hicks.

I would have given this book five stars, except for the way the viewpoint keep switching around. Something that I am personally not keen on, especially when it includes the antagonists. However this book managed to do this well enough not to spoil my enjoyment.

As this is the first book I have read in the "In Her Name" series, I had no pre-conceived ideas about the universe and was able to enjoy the book for itself. I particularly like aliens who had their won motivation and are not just humans in costumes.

(review of free book)
Jim Angel reviewed on Feb. 2, 2013
(no rating)
Absolutely brilliant. The characters are well defined, rich in background and the heroes are likeable and the villains are despicable. Having read the entire series, I would suggest starting with First Contact and work your way through the series...you won't regret it. My only disappointment was that it ended.

To be honest i haven't read anything besides some short stories since Hyperion. So i figured i might want to read some sci-fi book. It's been a while. Decided to download kindle from Google Play. Browsed free sci-fi books. And there it was... almost 5 stars. "Well it had to be good" i thought to myself. And here i am, 2 days later..just as i finished First Contact. I know it's not much of a review, but to be honest i don't think i can put it into words. Well, it is suffice to say that i already bought the sequel before finishing the first book. Thanks for such a great book :)

Classic military sci-fi. Yes it does have the usual US centric language but it is much less jarring in this book than in many of the genre I have read. And for once, the aliens are really quite alien and interesting.

If you start reading this book be prepared to also buy the rest of the series, because it's that awesome. It's a tearjerker with action and a hell of a read!