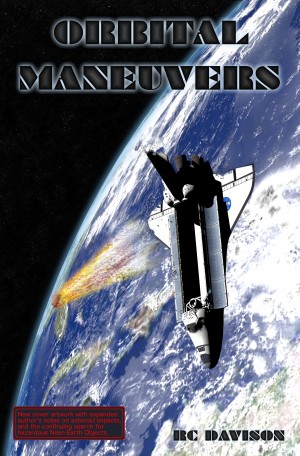 By RC Davison
Orbital Maneuvers takes you for the ride of a lifetime!
Damaged and stranded in orbit by a catastrophic asteroid impact on the Earth, the crew of the space shuttle Endeavour has only one chance for survival — get to the International Space Station. But a crew member’s homicidal actions to save himself at any cost, threaten everyone on board, and their only chance to return to Earth.
Available ebook formats: epub mobi pdf rtf lrf pdb txt html
First 50% Sample: epub mobi (Kindle) lrf more Online Reader
pdb
Price: $2.99 USD
Buy Add to Library Give as a Gift
How gifting works
Create Widget
Tags: space shuttle asteroid nasa international space station asteroid impact
About RC Davison

I am an electrical engineer and have been for the last twenty-some years, but I did not start out as an engineer.

In college I majored in physics and astronomy and graduated with a BS in Physics after the university dropped the astronomy program. After realizing that a four-year degree in physics was not the most marketable degree to have, I went on the get a Masters of Science in Electrical Engineering.

Throughout my professional career I fed my fascination for science by reading whatever I could find on all sorts of subjects from astronomy to zoology and watching everything I could on television.

While I was growing up in a small town in upstate New York I lived for the National Geographic Specials that were not on often enough for my satisfaction. I was ecstatic when my parents got a subscription to the magazine. As there was a dearth of science programs on TV in the sixties, I fed my desire for science by reading books and watching science fiction programs on our black and white television.

TV offered a few programs that were on during the time I was allowed to watch it: Twilight Zone (Scared me.), Outer Limits (Scared me even more!), Lost in Space (Wanted to be part of the Robinson family.), Voyage to the Bottom of the Sea (Interesting, but every week it was a new monster trying to destroy the sub.), Land of the Giants (Didn’t get to watch this one too much.) and the one that blew them all away—Star Trek! (Ahhh!) The technology, the characters and the special effects mesmerized me. (Yes, special effects. Don’t laugh! Taken in the context of TV sci-fi programs in the sixties, Star Trek was a quantum leap above the rest.)

I found myself particularly fascinated with Mr. Spock—the pure intellect, the cool, emotionless logic and the apparent mastery of everything having to do with science and math. Mr. Spock was my inspiration to pursue a career in the sciences. Star Trek, coupled with the fervor growing with the Apollo Space Program, and the goal of landing on the Moon by the end of the decade, fueled my desire to be out there exploring The Final Frontier. I wanted to be on the Starship Enterprise and even though I was old enough to know better, I couldn’t help but look up at the night sky in hopes of seeing that amazing starship streak across it after being thrown back in time, yet again!

As time moves forward, as it always does, I grew up and realized that I probably wasn’t going to get into space and Scotty wasn’t going to beam me up! I did realize that I could participate in science, technology, and even the space program by pursuing my interests in astronomy and physics. So through a round about way I did end up working on a project (CRAF – Comet Rendezvous and Asteroid Flyby) to measure the dust coming off a comet, but due to NASA budget cuts the program never flew.

The next highlight of my career came when the same company won a contract to build laboratory balances for the International Space Station. Again, budget cuts and a constantly changing space station design killed the project in midstream. Touching space, even indirectly was not meant to be.

I continued to work in developing scientific instrumentation and staying abreast of the latest development in science. With the new age of space telescopes, and advancements with ground-based telescopes the wonders of cosmos are never ending.

Where did the story come from?

The story sprung out of the fog of contemplating what the first astronaut’s were doing on the fledgling space station in the mid 90’s. More specifically, I was wondering just what do they dream about while floating in microgravity. Do they dream of walking on terra firma or are they floating in their dreams? The main idea of the story was fueled by the numerous programs and articles in the mid 90’s discussing asteroid impacts on Earth, and how we need to start mapping these objects and come up with a plan for protecting ourselves.
The more I learned about the threat, the more I realized that it was something that we needed to attend to sooner rather than later, where the costs—monetary and other—would be a lot less than if we discovered that we only had a few months advanced notice of an impact. I wrote the story with the idea of entertaining as well as educating the readers about this threat. I hope that I’ve succeeded on both counts.

Orbital Maneuvers Trailer
Audio/video promo for the book ORBITAL MANEUVERS by RC Davison, which is about a space shuttle crew's struggle to survive a devastating asteroid impact on Earth that strands them in space. Check out the companion website for the book: http://www.orbitalmaneuvers.com

You have subscribed to alerts for RC Davison.

You have been added to RC Davison's favorite list.

You can also sign-up to receive email notifications whenever RC Davison releases a new book.