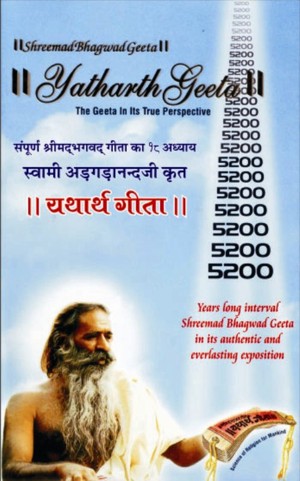 By Shri Paramhans Swami Adgadanandji Ashram Trust
Rated 5.00/5 based on 1 reviews
What were the inner feelings and emotions of Shri Krishn when he preached the Geeta? All inner feelings cannot be expressed in words. Some can be told, some are expressed through the body language, and the rest are to be realised which can only be understood by a seeker through experiences. Only after attaining the state which Shri Krishn had been to, an accomplished teacher knows what Geeta says. More
Yatharth Geeta is a Geeta in its True Perspective. This book has been recognized as the "Vishwa Gaurav - Universal Pride" by the World Religious Parliament on 01-04-1997. The Book has also been adopted and praised by University of Michigan. The Author, Swami Adgadanandji is a saint who is bereft of worldly education, yet is internally organised by the grace of accomplished Guru, which become possible after a long practice of meditation. He considers writing as an obstacle on the path to the Supreme Beatitude, yet his directions become the cause for this treatise. The Supreme Being had revealed to him that all his inherent mental attitudes have been nullified excepting a minor one writing of "Yatharth Geeta" Initially he had tried his best to cut this attitude too, through meditation, but the directive prevailed. Thus the treatise, "Yatharth Geeta" become possible. Where ever mistakes crept into the treatise, the Supreme Being himself rectified them. We bring forth this book with the wish that the Swamiji's motto "the internalized archive peace" would become "peace for everyone at the end". Swamiji was recognized as the Vishwa Guru by the World Religious Parliament on 03-01-2001. The Audio and the text of the Book, Yatharth Geeta is available in various International (English, Russian, French, German, Spanish, Chinese, Italian, Norwegian, Dutch, Portuguese, Arabic, Japanese, Persian) and Indian languages (Hindi, Bengali, Assamese, Gujarati, Marathi, Tamil, Telugu, Malayalam, Kannada, Oriya, Sindhi, Sanskrit, Nepali, Punjabi and Urdu) and the same could be downloaded from http://www.yatharthgeeta.com/. (Publisher: Shree Paramhans Swami Adagadanandji Ashram Trust)
Download: epub mobi (Kindle) pdf
Price: Free! USD
Add to Library
Create Widget
Tags: god body meditation spirit yoga bhagavad gita supreme being shreemad bhagwad geeta srimad yog
About Shri Paramhans Swami Adgadanandji Ashram Trust

Swami Shri Adgadanad Ji Maharaj came to the recluse of the worldly saint Paramanand Ji at the age of 23 years in November 1955 searching for the truth. The hermitage of Parmanand Ji was at Chitrakoot Anusuiya, Satna, Madhya Pradesh (India) amidst the dense forests infested with wild animals. Living in such inhabitable forest in the absence of any facility. This rightly reflects that he was a great sage. Reverend Paramhans Ji received premonitions of his arrival many years ago. The day he reached the ashram, Paramhans Ji received divine presage. He had declared to his disciples, “A young man who is ardently seeking to go beyond the periodicity of life must be coming at any moment now.” Moment he cast his eye upon him, Paramahans Ji declared, “Here he is!” Whenever a pupil comes in contact with a great sage, immediately it is beyond his senses to fathom the greatness of the sage. He was also intimated by the divine soul and chaste Brahmin, “The sages who have been incarnated in this world, your Guru has all those qualities and he is such sage. With the strengthening of his faith in the Guru his spiritual pursuit also speeded up. Guided under the angelic guidance of the Guru he set out on the path of spiritual freedom. The aim was established.
Maharaj Ji, although was not interested in writing, following the godly directions he has contributed invaluable treatises through speech and in text for the social good. The first such publication is ‘Jeevanadarsh and Atmaanubhooti’ – is an account of the ideal life and the spiritual pursuit of his Guru Paramhans Paramanand Ji. It is a collection of his life sketch and many astonishing incidents. Many of the people are even alive today, who have seen such unique personality and for that matter they consider themselves very lucky. Secrets of the techniques of spiritual pursuits, which have been revealed to him by the Guru, have also been included in this book. It is one of the most appraised and invaluable books in today’s world, on the subject of spiritualism, which could only be perceived by the student on the path of attainment of spiritualism. The divine direction has become instrumental in the creation of this book. Since the thought , promulgated by the Yogeshwar Lord Krishna have been expressed in their simple rudimentary form, it is called ‘Yatharth Geeta’. Only a contemporary saint can find true solution for the social good, answers to their questions and solve their problems. The dead do not rule from the graves. To have reverence for the departed and take guidance from them to certain extent may be alright, however, for the contemporary problems, we need to take guidance from some great living saint only. Swami Ji has never advanced claim that he has attained divinity. He merely presents to the society, what he has been able to receive in his quest of Truth.

In accordance with Yathartha Geeta, as soon as you begin to study the teachings of the Geeta, the God would guide you to the right Guru. You will be guided from within. Your doubts would be dissolved. You will be awakened from within and would gradually proceed on the path of divinity...

You have subscribed to alerts for Shri Paramhans Swami Adgadanandji Ashram Trust.

Would you like to favorite Shri Paramhans Swami Adgadanandji Ashram Trust?

You have been added to Shri Paramhans Swami Adgadanandji Ashram Trust's favorite list.