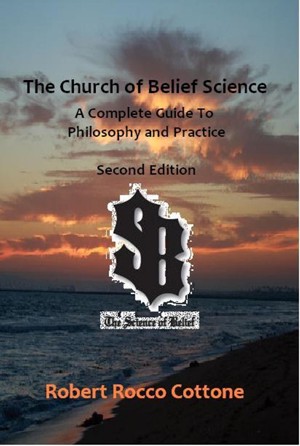 The Church of Belief Science: A Complete Guide to Philosophy and Practice

By Robert Rocco Cottone
This book provides a summary of the philosophy and practice of Belief Science, the religion of the future. The Church of Belief Science is established on postmodern philosophy--where faith is housed in relationship systems. Readers will learn postmodern tenets as applied to religion. Church Canons, doctrine, and specific practices are outlined and defined. Church ceremonies are also described.

Robert Rocco Cottone was born in St. Louis, Missouri in 1952. He was raised in the post World War II Italian-American culture in the suburbs of St. Louis and had a story-book boyhood right from the pages of Mark Twain. He would ride his bike for hours to watch the barges at the Alton lock and dam, and he was enthralled with the power of the mighty Mississippi. He attended Catholic grade school and later switched to public schools in the St. Louis suburbs. During the Viet Nam War he remained stateside and was a medic in the Air Force. He later attended the University of Missouri-Columbia and earned a degree in psychology. He continued his studies earning a master’s degree in counseling at the University of Missouri-Columbia. He earned a Ph.D. degree at St. Louis University in 1980. He is currently a licensed psychologist and a Professor of Counseling and Family Therapy at the University of Missouri-St. Louis. He has authored over 90 professional and scientific articles and several books, including: Theories of Counseling and Psychotherapy: Individual and Relational Approaches (2017, Springer Publishing Company); Ethics and Decision Making in Counseling and Psychotherapy, with Vilia Tarvydas (2016, Springer Publishing Company); High Romance: A Book of Romantic Self-expression (2012, Smashwords); Paradigms of Counseling and Psychotherapy (2012; Smashwords); The Church of Belief Science: A Complete Guide to Philosophy and Practice (2012, Smashwords) and Toward a Positive Psychology of Religion: Belief Science in the Postmodern Era (2011, John Hunt Publishing).

In 2007 he founded the Church of Belief Science, a church completely established on postmodern philosophy, where relationships are crucial to all understanding and experience. His most recent publication is: The Church of Belief Science's Reform Christianity Bible (2019, Smashwords) which is a positive, fully affirming, and inspiring revision of the Gospels of the New Testament.

You have subscribed to alerts for Robert Rocco Cottone.

You have been added to Robert Rocco Cottone's favorite list.

You can also sign-up to receive email notifications whenever Robert Rocco Cottone releases a new book.