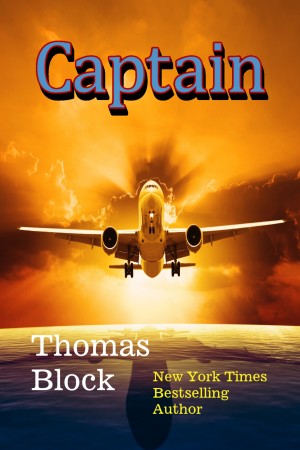 "Captain" is about the individual and collective struggles of each of these men and women as they attempt to deal with and ultimately fight against the odds and circumstances that are stacked against them.

"Captain" is a novel that pits man against man while also pitting man against machine. It is a story about the need for human judgments, hard-learned experiences, gut feelings and unbridled perseverance in an effort to rise up against a world where the strict adherence to written rules, regulations and procedures have been accepted as the norm.

"Captain" is about the way real airline pilots think, feel and react, especially after those giant airliners that they've strapped themselves to have suddenly turned vicious and unpredictable.

Author Nelson DeMille says of "Captain":
After a long hiatus from writing, Captain Block rejoins the ranks of legendary pilots-turned-novelists such as Ernest K. Gann ("The High and the Mighty") and brings us "Captain" - one of the best aviation/adventure thrillers you will ever read.

"Captain" puts you in the cockpit, in the passenger cabin, and at airline headquarters with an intricate and intriguing array of characters. This novel is nothing short of the most frightening and heart-pounding Trans-Atlantic flight since Charles Lindbergh's solo. Or will it turn out to be Amelia Earhart's tragic Pacific crossing?

"Captain" is right up there with the best of the aviation thrillers; an edge of your seat story of what happens when something goes horribly wrong when there is no room for wrong. Captain Block knows his stuff, and it shows on every page. Welcome aboard.
Available ebook formats: epub mobi pdf rtf lrf pdb txt html
First 10% Sample: epub mobi (Kindle) lrf more Online Reader
pdb
Price: $5.99 USD
Buy Add to Library Give as a Gift
How gifting works
Create Widget
Tags: airline disaster hijacking pilot aviation thriller nelson demille captain aviation airliner terrorist 911
About Thomas Block

Reviews of Captain by Thomas Block

A thriller. Enjoyed the plot and details of the character. Found it all to be very believable. An emotional roller coaster of a flight for us to read.

You have subscribed to alerts for Thomas Block.