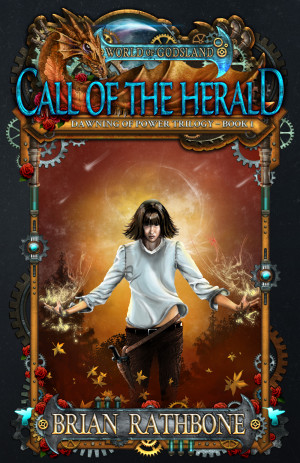 Call of the Herald

Brian Rathbone is a horse trainer turned author and creator of The World of Godsland fantasy series, which includes Call of the Herald, Inherited Danger, Dragon Ore, and Regent (Feral and Regal are forthcoming). He is also the author of the Sam Flock novels, a paranormal adventure series that begins with Lure.

Also in Series: World of Godsland

Reviews of Call of the Herald by Brian Rathbone

The story is imaginative, and the writing shows genius in some places. However, much of the plot is a travel story that includes many scenes that seem to be unnecessary to the plot and just take up real estate in the book. Many of the plot twists don't seem to be set up as well as they could be either.

To be fair, a young adult would probably not see the problems that I do, but I would warn other adult readers that this book may be a little lack luster.

I do believe that the author will make a great writer after gaining experience with a few more novels and looking at what really matters to the plot.

As an avid reader of fantasy, sometimes it's hard to try someone new rather than re-reading books I love, but I'm so glad I opened this book.

The first character you meet, Catrin, is a strong female lead. It doesn't take long to get to know who she is. Other key characters are introduced quickly and fleshed out without taking the reader out of the story. In fact, it didn't take long for me to get into the story to the point where I didn't want to put it down.

Catrin is a seemingly normal young woman, but the reader soon learns that there's more to her than she or anyone else realizes. Times are changing (as they tend to do) in the world of Godsland and dire consequences have been prophesied. Unknown powers find her and she has no idea what to do with them. Add to that the threat of invasion and people hunting her and you have one stressed out young woman. ;)

The people who surround Catrin are interesting and well developed. They don't cater to her, but treat her as a real person, which is nice to find.

The adventure and danger are exciting and kept me on the edge of my seat, ready for more. My biggest complaint about this story was reaching the end and having to wait for the next book to load. ;)

Compelling drama with characters that you will love. A wonderful start to a great series. A nice mixture of history, worldbuilding, magic, and personal stories all wrapped together to tell one page-turning tale. Very imaginative!

THE WHOLE SERIES - Godsland Series of 2 Trilogys IS AWSOME.
CAPTIVATING - ENTHRALLING - A MUST READ.

A well written journey into a new world.

Completely loved this story.... keep up the good work!!

Brian Rathbone is an excellent storyteller. Others have said what the story is about, but I rather tell you what I think of the writing. It read very well. I was impressed by it's flow and how quickly I was able to get through each chapter. I read the over 84,000 words in two days, started yesterday and just finished. I would have finished in one day, but life got in the way. I am invested in the characters, and looking forward to see how they fair. There are times in fantasy books, a writer may drone on about scenery and the mechanics of something that works. Those I find boring. NOT this writer, he doesn't bore. He actually made the mechanics of a ship sound interesting. KUDOS, and now I'm off to the next book in the series.

This is the first of a series, set in a mythical place that seems suspiciously like Australia. An ancient legend about the coming of "The Herald" appears to be about to come true. The people of Godsland are under attack from a foreign nation that wants to destroy the Herald because they fear it will attempt to destroy them.

The Herald appears in the guise of a young girl. She possesses enormous powers that she does not know how to control. Guarded by a small group of faithful friends, she journeys across the land, in search of a safe place, while fighting the invaders to protect her homeland.

The book was very well written. The characters were interesting and engaging. The bad guys are super bad. The heroes are good people, but flawed in ways that make them believable and sympathetic. I think the book could have benefited from more backstory: I wanted to know the source of the legends, a little more of the history of Godsland and the origin of their enmity with the invaders. I'm guessing that information will be contained in the next volume of the series.

It was a good story, well told.

If you like fantasy, you will most likely like this book. Brian has a pretty good tale going, although the beginning is a little bit dry. I did struggle past the first chapter and found myself a little bit lost at first by what he was trying to convey with his scene on the comets.
The reader will eventually find out what the comets are all about later on in the book.
It does have a pretty good hook after the second chapter and I was late getting back to work on a few occasions. I just didn’t want to put this book down after I got past the gritty stuff.
The ending is kind of a cliff hanger but I was satisfied enough with the ending to give this book four stars.
I will even be reading the next book in the series. (I did like it that much.)

You have subscribed to alerts for Brian Rathbone.

You have been added to Brian Rathbone's favorite list.

You can also sign-up to receive email notifications whenever Brian Rathbone releases a new book.