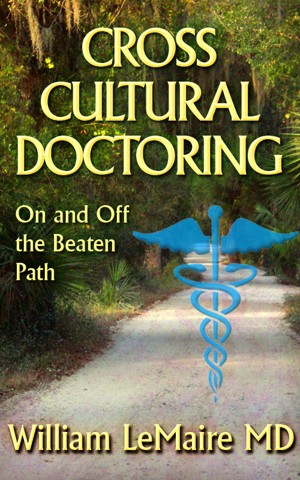 Crosscultural Doctoring.On and Off the beaten Path

By William LeMaire
This is about my academic career as an Ob&Gyn; my decision at 55 to jump in the unknown; my work abroad; and how I accomplished this. The book is a series of loosely connected anecdotes, medical and non medical, funny and not so funny. I will convey the excitement and satisfaction of this decision. The hope is that the book will inspire others to make the jump and may be even to write their story More
In Cross Cultural Doctoring you will read about my career as a successful obstetrician and gynecologist in academic medicine at a major university.

You will read why I decided at age 55 to leave my position, jump into the unknown and get off the beaten path. I will relate how my wife, Anne, and I accomplished this and how I kept working for various lengths of time in a number of different cultural settings around the world and how we traveled extensively between assignments.

The book is written as a series of loosely connected anecdotes, some medical, some non-medical. Some are funny and some are not so funny. When appropriate, I have added some reflections about our experiences.

I try to convey to the reader the excitement we have felt about our adventures. I hope that the book will inspire readers, medical and non-medical, to consider at some point of their careers to take the step to get off the beaten path. Anne and I certainly have never regretted our choices and have never looked back. Reading this book might also inspire people with similar experiences than ours, to write and publish their story.

One of the highlights of my medical work abroad has been the four months I volunteered at a small Catholic Hospital in Chiapas Mexico. The nuns there did an incredible job running the hospital for the impoverished Mayan population under difficult circumstances. They need all the help they can get. Thus I have decided to make this book available for free and suggest to the reader that they consider making a donation to San Carlos Hospital in Chiapas, in lieu of the customary downloading fee.
Download: epub mobi (Kindle) pdf more Online Reader
rtf lrf pdb txt
Price: Free! USD
Add to Library
Create Widget
Tags: teaching career change career medicine africa australia new zealand alaska internship academia tasmania belgium okinawa early retirement career satisfaction travel abroad st lucia karachi pakistan medical education residency training cultural adaptation obstetrics and gynecology belgian congo chiapas mexico indian health service
About William LeMaire

I was born on November 3, 1933 in a small town close the major port of Antwerp in Belgium. All of my primary and high school education was in Antwerp. I lived through WW II and the German occupation.

I went to medical school at the Catholic University of Louvain in Belgium, where I graduated in 1958. My internship was in Schenectady, New York. When I finished the internship, Belgium still had an obligatory military service. Instead I signed up with the Belgian colonial health service and was assigned to a government hospital in the interior of the former Belgian Congo, now called, after their independence from Belgium, the Democratic Republic of the Congo. I left there in the middle of 1960 shortly after that country obtained its independence.

After completing a residency in obstetrics and gynecology at the University of Miami in 1965, I completed a two year fellowship in reproductive endocrinology in Miami and then joined the faculty of the Obstetrics and Gynecology Department of the UM. I rose rapidly in the academic ranks and was promoted to full professor in 1974.

Wanting to retire early from my academic position, I left the full time practice there at the end of 1989 at the age of 55. However I remained in the faculty and to date I am an Emeritus Clinical Professor of the University of Miami.
After leaving the University of Miami, I worked for various lengths of time as an obstetrician and gynecologist in a number of locations around the world and and in the USA. These locations include : Okinawa Japan; Karachi, Pakistan; Sitka, Alaska, Queensland, Australia; Tasmania, Australia; New Zealand; St Lucia in the Caribbean; Chiapas, Mexico. Many of my assignments were organized through an organization out of Salt Lake City in Utah, called Global Medical Staffing. This organization recently ran an article about our travels and experiences in their newsletter. the link is : http://www.gmedical.com/newsletter/LeMaire

Currently (2017), I am retired from clinical practice and am Emeritus Professor of Obstetrics and Gynecology at the University of Miami, Miller School of Medicine. I am also voluntary professor at the Florida International University, Herbert Wertheim College of Medicine, where I am member of the Medical College Admissions Committee and interview medical school applicants.

I am board certified in Obstetrics and Gynecology and in Reproductive Endocrinology and Infertility and maintain a license to practice in Florida.

I have belonged to a number of professional societies and have carried a number of editorial and peer review responsibilities. I was honored with a Fogarty Senior International Fellowship for one year in 1997 at the University of Goteborg in Sweden. I am an author of more than 150 publications in various professional journals.

I am married to Anne and have four children and eight grandchildren. I am fluent in English, Dutch and French and conversant in Spanish. My wife and I are both in excellent physical health. We enjoy outdoor activities and we were both competitive swimmers. We do a lot of traveling within the USA and in other countries.

Reviews of Crosscultural Doctoring.On and Off the beaten Path by William LeMaire

You have subscribed to alerts for William LeMaire.

You have been added to William LeMaire's favorite list.

You can also sign-up to receive email notifications whenever William LeMaire releases a new book.