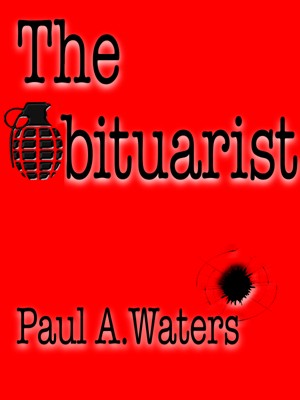 Paul Waters is an award-winning BBC producer. He grew up in Belfast during “the Troubles”, was involved in cross-community peace groups and went on to report and produce for BBC Northern Ireland, BBC Radio 4, BBC Radio 5 Live, BBC World Service and Channel 5. His claim to fame is making Pelé his dinner. But Paul has also covered elections in the USA, created an alternative G8 Summit in a South African township, gone undercover in Zimbabwe, conducted football crowds, reported from Swiss drug shooting-up rooms, smuggled a satellite dish into Cuba to produce the first BBC live programmes from the island and produced the World Service’s first live coverage of the 9/11 attacks on America. Paul has taught in Poland, driven a cab in England, busked in Wales, been a night club cook in New York, designed computer systems in Dublin, presented podcasts for Germans and organised music festivals for beer drinkers. He currently co-presents a book and writers podcast called We’d Like A Word. He lives in Buckinghamshire and has two children. His email is paulwaters99 AT hotmail DOT com

Reviews of The Obituarist by Paul Waters

Got absolutely no work done that afternoon as I opened the first page and the story just kept me engaged until I finished it. Tally ho chaps, bandits at twelve o'clock. A ripping yarn!

Clever,absorbing and witty. Paul writes with deft lightness (and darkness), delivering a fascinating easy read. He brings back to life the Biggles type RAF heroes of World War 2, qickly developing the characters and the values they lived for and died by. The plot develops and weaves into present day press obsession (topical) and a splendid, surprise finish. Paul is an obviously accomplished writer, so let's see more soon.

(reviewed 3 days after purchase)
CMangat reviewed on June 11, 2012
(no rating)
Compelling and subtly disarming - the author takes stock characters from a wide range and imbibes them with a new life of their own...

...Characters stalk these (e)pages with a real glint in their eyes, and occasionally you get the feeling they're convincing enough to be looking straight into yours.

Looking forward to others in the same mode & mood!

(reviewed the day of purchase)
Su Verheoven reviewed on June 6, 2012

Really enjoyable ride! A page turner from the outset!

Beautifully insightful characterisation, delivered with a good helping of dry wit and with just the right amount of information for the book to play like a sumptuous film in your head!

Paul does justice to our wonderful World War II heroes, capturing perfectly the upstanding nature of their morals, together with their playful, youthful comradery. The Obituarist is a delicious juxtaposition of the pinnacle of our war heroes' lives, perfectly 'twisted' with today's unscrupulous media-crazed society.

There are some fabulous observations of human behaviour and thought processes, which are simply sublime and rather thought-provoking in their description.

This is not just a well written story which kicks along at a hell of a pace but also a clever multilayered observation of human behaviour, with a backdrop from two eras and what happens with the passing of time. The Obituarist certainly leaves you with something to think about.

Old soldiers never die? You've got to read this!

Swiftly spiralling plot, deftly humorous style, with wry sidelong glances at contemporary media (and, of course by implication, we who consume it!)...

Paul A. Waters's The Obituartist will keep you reading and smiling to yourself from the first line to the last.

(reviewed 13 days after purchase)
James Cawley reviewed on May 16, 2012
(no rating)
Witty and wry, more of a short story, The Obituarist is the perfect railway journey or beach book. I read it pretty much in one sitting, amused by the parody and the plot alike. More please.

Alec said he could get me one from the morgue. It wasn't a hundred per cent kosher but nobody would ever know.

That was my first and only time to make use of the morgue. Alec Reid was a writer and a lecturer in Trinity College, Dublin, and he was offering to get me Jeremiah Dempsey's obituary from the morgue in the Irish Times .

Jerry was, however, still very much alive. In fact, I was to be one of a number of teenagers who would interview him on Telefís Éireann's programme "The Person in Question". Jerry had been General Manager of Aer Lingus (the national airline) for the previous thirty years.

Newspapers always kept a running obit on people in the limelight so they could be published at very short notice and I was getting surreptitious sight of Jerry Dempsey's as part of my interviewer's brief. Exciting times.

So I was more than interested to see what Paul Water's Obituarist would get up to. And I wasn't disappointed.

The book is written in a light vein and a little in the style of Boy's Own. It includes a line up of WWII RAF characters ranging from stiff upper lip to ginger pubic hair.

The reader follows the story through the character of the Obituarist himself as successive obituaries paint in the colourful characteristics of the members of wartime TripleX mission as they each lose their last dogfight with the grim reaper. And all the while the Obituarist is growing in stature.

There is, however, a lurking element of Greek tragedy in this drama, right up to the dramatic final obituary.

Beautifully written. A tale both light and dark with an excellent twist.

You have subscribed to alerts for Paul Waters.

You have been added to Paul Waters's favorite list.

You can also sign-up to receive email notifications whenever Paul Waters releases a new book.